How low would gravity have to be for the balance system to fail?

This is a very critical question that is necessary to get answered for flights to distant celestial bodies. The inner ear liquid makes you perceive which way you're pulled onto a celestial body. This makes you keep balance when standing or walking. We know that on the Moon at about 1/6 g the astronauts sometimes lost balance and fell. Its gravity seems to be close to the limit of where you can walk stable. Do we know where the limit is where your inner ear liquid would fail and you'd have to be very careful when walking on a body to not fall?

Is it possible that the limit is around 1/8 g (in that case Callisto would barely be within)?

The article you cited describes a study using the Short Arm Human Centrifuge at the ESA training center in Colonge, Germany. Here is a picture of that facility from the web page of the contractor that installed it: 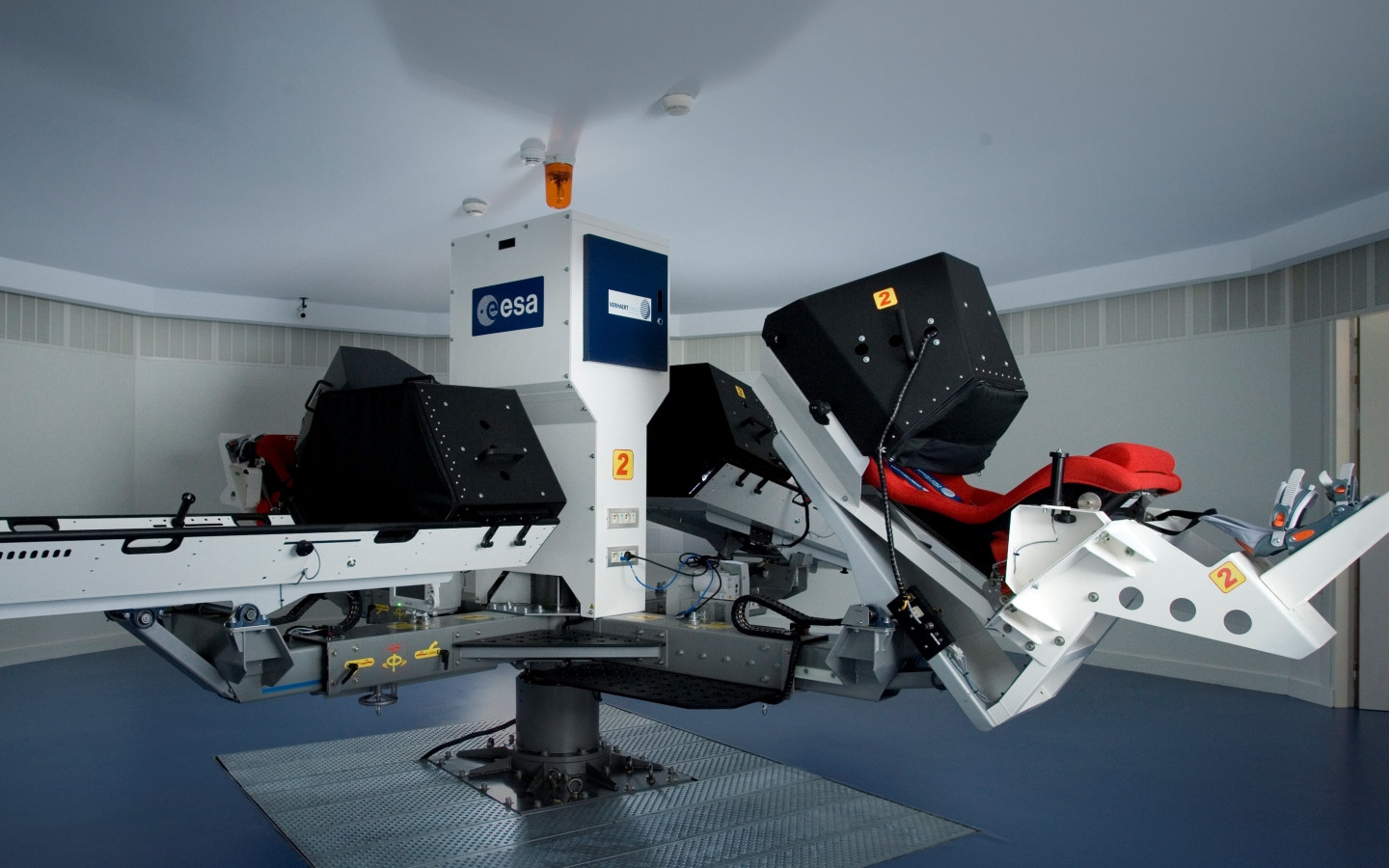 The red object is one of four couches for human subjects. They recline with their heads downward and away from the center, and are then spun on the 6 meter diameter centrifuge at 40 revolutions per minute.

According to your cited article,

While whirling around in the centrifuge, the participants took a perceptual test, in which they had to choose whether the tilted letter they were looking at on a circular computer screen was a "p" or "d." In a near-zero-gravity environment, such as the International Space Station, astronauts need to rely on visual cues alone to orient themselves, Harris said. The results of the experiment found that gravity only starts influencing a person's sense of up and down once it hits about 0.15g.

The problems I have with this study are:

There's no good way to study walking at that much gravity

This PDF from the NASA Partial Gravity Analogs Workshop lists every known method of creating less than 1 g. (There isn't space here to describe each of these methods; read the paper for that.) Each method has flaws for simulating walking in low gravity:

Finally, there is a misconception in the question that Apollo astronauts fell on the moon because of the effects of the 1/6 gravity on the inner ear. Actually, the astronauts fell because the spacesuits were cumbersome and the lunar soil was sometimes slippery.

Most crewmen preferred the loping movement. When the loping movement was used, the inertia of the crewman wearing the extravehicular mobility unit (representing an earth weight of 360 pounds) and the sometimes slippery effect of the lunar regolith required the crewman to plan for a finite stopping distance in advance of the selected point.

[...] The Apollo 11 crew noted that egress operations around the hatch, porch, and ladder were performed easily without losing body balance.

No medicines for motion sickness were taken while on the moon.

Indeed, inner ear function on the moon was good enough that the Apollo 14 astronauts could not sleep because they could sense that their lunar module was leaning 7 degrees.

The tilt was especially noticeable during the sleep periods and made sleep difficult because the crew was uneasy in this awkward position.

4
Challenges to building a human habitat on Titan (Saturn's Moon)?

37
What would the size and rotation of a station need to be to produce 1g gravity from head to toe?
20
How well would a broken bone heal in zero gravity?
13
Would human "superpowers" in low gravity fade away through reduced muscle mass?
5
Would space ship/station rotation for artificial gravity cause the "axis" to also rotate?
5
Would a person exposed to zero gravity for a long time have trouble riding a bicycle?
5
How would you move in low gravity without a suit?
6
What would a candle flame look like in low gravity?
15
How is lower/no gravity simulated on a planet with gravity, without leaving the surface?
6
What effects would the longer days on Mars have on humans?