Which Viking-1 orbiter photo is this? When was it taken and what part of Mars is shown?

This answer to Are there any photos of the Martian terminator from low Mars orbit? includes (without credit) what looks like an oft-repeated photo of Mars. A comment written from reverse image searching suggests it's from Viking-1 in 1976.

National Geographic says this is a Viking image and Universe Today says "...taken by the Viking 1 orbiter in June 1976." Forbes says "Image credit: NASA/Viking 1". While this is not really an image of the terminator, it's getting close; at the bottom right we see that the sides of tall features facing us are dark.

Question: Which Viking-1 orbiter photo is this? When was it taken and what part of Mars is shown?

With the time and identity of (at least some of) the features in the image known, I'd like to try to figure out the foreground's proximity to the terminator, possibly using the reconstructed trajectory in JPL's Horizons as well since it includes a model for coordinates on planets and their rotation. 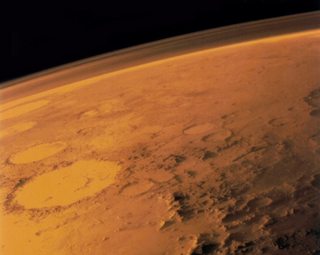 the region east and northeast of the Argyre basin during winter in the southern hemisphere. (a) Most of the snow-covered Argyre basin is shown. This was taken just after the winter solstice when solar heating was minimal. 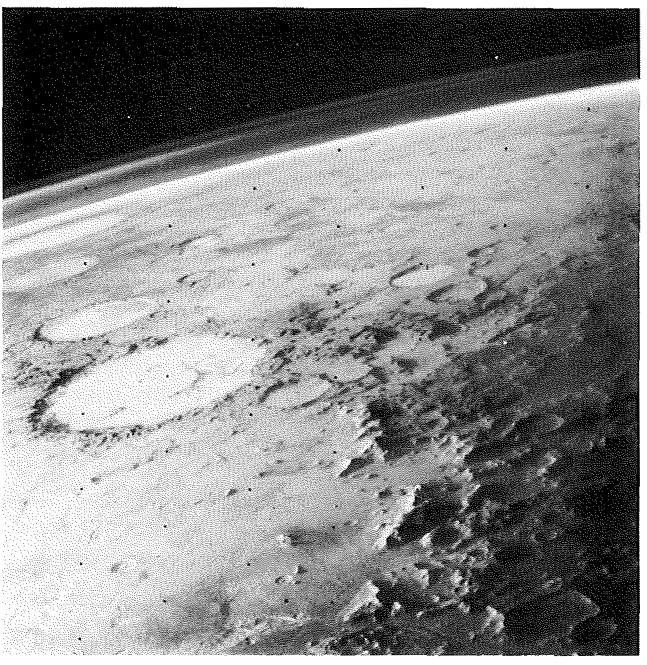 I found it in NASA-SP-441 Viking Orbiter Views of Mars p. 144 where it is shown in black & white. Some pictures in this document are in color. I suspect the linked image may have been re-processed more recently although I haven't found direct evidence of that. I read that this fellow was doing some of that work. 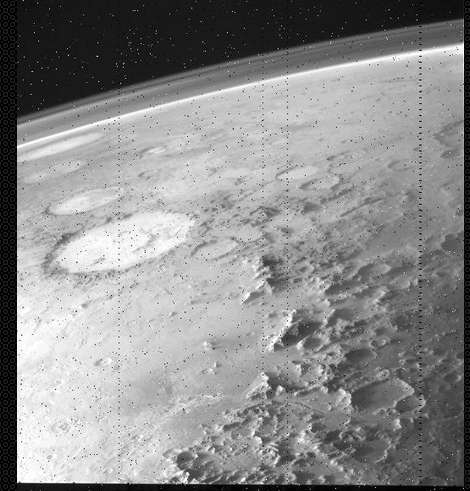 Just for fun, here's a similar view from Google Earth's Mars globe showing the chain of four large craters, which TIL are Lohse, Helmholtz, Wirtz, and Galle craters. At least one of those names resonates with me :) 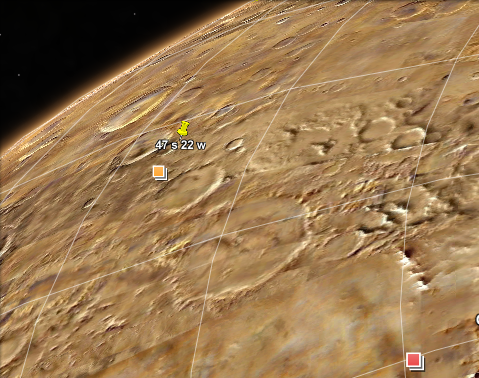 Not the answer you're looking for? Browse other questions tagged mars identify-this-object photography viking or ask your own question.

6
Viking 1 - Cydonia Face on Mars Photograph Multitudinal Black Dots
3
Are there any photos of the Martian terminator from low Mars orbit?
1
Locations of the terminator on Mars' surface on 1976-07-24T10:35:26Z?

5
What happened to the Viking 2 Orbiter?
2
Is this the first photo of Jupiter's ring(s) from deep space?
3
Why is a corner of InSight's selfie cropped like this?
3
Are there any photos of the Martian terminator from low Mars orbit?
1
Locations of the terminator on Mars' surface on 1976-07-24T10:35:26Z?
3
Why did MRO have to "both pitch upward and roll hard to the left" to point exactly at Perseverance during the entry, descent and landing phase?
5
Where is the uncropped version of this cool Ingenuity navigation camera GIF?