From what I understand and remember the first cookies baked in space were returned to Earth for testing and I think part of the reason that no cookies baked on the ISS's oven could be eaten is that they could make crumbs. Certainly the most bread-like product regularly consumed on the ISS are tortillas and in part this is because of their low crumb coefficient, and what bread is sent to space is bite-sized, reducing the effective crumb coefficient to nearly zero. 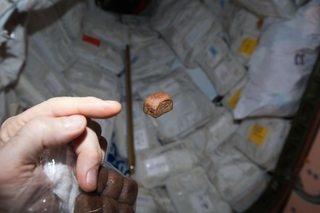 click for larger, from Why was there a miniature bread on the ISS?

In CNN's new video He spent 520 days in space. Hear his tips for coping with isolation retired astronaut Scott Kelly recommends several thing that one can do to cope that he draws especially from his experience of an extended stay in the ISS, though one may have been more difficult than the other three:

But what caught my eye is file footage of him about to eat what looks like chocolate cake or perhaps a brownie.

Question: Did astronaut Scott Kelly eat cake (or a brownie) in space? Was it tested for crumb generation and approved for spaceflight? 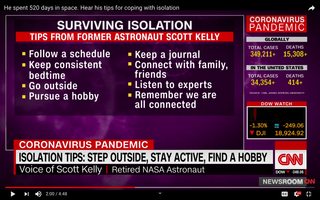 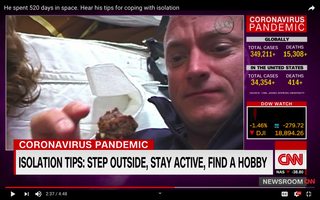 I don't know exactly what Kelly is eating there, but brownies are on the ISS menu.

Some foods can be eaten in their natural forms, such as brownies and fruit.

A good moist brownie in bite-sized pieces has a manageable crumb coefficient.

Not the answer you're looking for? Browse other questions tagged identify-this-object astronaut-lifestyle food reduced-gravity-cooking or ask your own question.

23
Can we write with chalk on blackboard in space?
15
Why was there a miniature bread on the ISS?
6
World's most expensive space cookie? (What am I looking at, object identification, rivets and all)

15
Can you have birthday cake in space?
8
How do astronauts drink or eat in space?
3
How long can an astronaut stay in space and later have children?
6
Did any astronaut take a Bible into space?
12
Mass of food per astronaut per year for an extended deep space excursion?
5
How did Skylab's "space shower" work?
6
At what moment during his flight did Yuri Gagarin eat?
6
World's most expensive space cookie? (What am I looking at, object identification, rivets and all)