Is a low-altitude, stable glide really absolutely needed to bail out of the space shuttle?

After the Challenger disaster, the Space Shuttle astronauts were outfitted with pilot spacesuits equipped with parachutes and internal emergency oxygen supplies, and the space shuttle was equipped with a jettison-able hatch and an extendable pole so that astronauts could bail out of a space shuttle that was not going to be able to land safely. This system was somewhat infamous because it would (probably) not have saved the astronauts from either of the two fatal Space Shuttle accidents and its use was generally contingent on the Space Shuttle being intact, controllable, and generally not suffering the kind of catastrophic emergency that necessitates bailing out.

What I am curious about is just how strong the requirements for a low-altitude stable glide for bailout actually was. Could crew, for example, plausibly throw themselves out of the crew compartment of a disintegrating shuttle as long as it wasn't rapidly tumbling or subject to too high of a G-load to clamber around?

The escape pole / hatch jettison system was only certified to work in a controlled gliding flight situation. See Mode VIII Egress in the Crew Escape Workbook

That doesn't mean that the crew couldn't try to save themselves though. There was a Loss of Control / Break-up procedure in the Ascent Checklist. 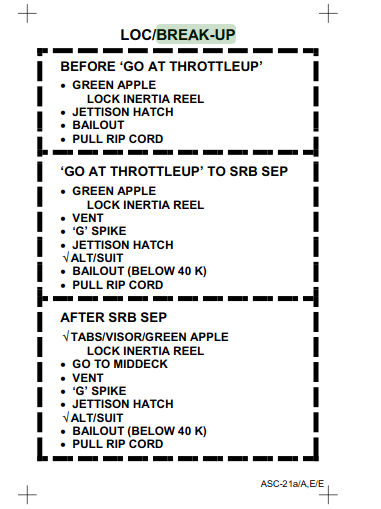 There's certainly a cost-weight-feasiblity effect. If you compare the Shuttle seats with the ejection seats used for high-speed, relatively high-altitude, military jet aircraft, the jets' seats have a massive ejection mechanism -- not to mention that they're designed to crash thru the canopy (in case of canopy eject failure). The cost of either designing the Shuttle seats and Shuttle body to do a similar action would be horrendous.

Ejecting at supersonic speeds is usually fatal. Brian Udell is a rare survivor. Ejecting at extreme altitudes is an additional problem. You can't deploy a chute until the atmosphere is reasonably thick and you (or your capsule) have been slowed sufficiently from air-drag tht the chute won't rip to shreds upon opening. So now we're almost proposing a 9-person Apollo capsule analog to save a Shuttle crew.

If you plan instead to wait until the Shuttle has gone subsonic and is more or less gliding stable, then most of the "it just broke up and destroyed everything" scenarios have already happened.

14
Did the U.S. Space Shuttles have a way for crew to bail out?

8
Were ejection seats on the Space Shuttle a practical safety system?
4
Were shuttle and ISS spacewalks always done with two astronauts?
4
Why would a space shuttle have flown a normal first-stage and early-second-stage ascent trajectory during an RTLS abort?
11
Why didn’t the space shuttle’s engine-out checklists include steps for attempting a relight?
19
After the loss of Challenger, why weren’t Galileo and Ulysses launched by Centaurs on expendable boosters?
6
What were the space shuttle’s emergency procedures for an SRB or ET separation failure?
18
Challenger Shuttle: could the crew have survived?
14
Did the U.S. Space Shuttles have a way for crew to bail out?
34
What kind of "safe" was carried on the Space Shuttles?