Is a polar geosynchronous orbit described by Viviani's curve?

This answer to Is there a name for the great circle where latitude and longitude are equal? says (in part):

More generally, a clélie is the name given to any spherical curve where the longitude $\varphi$ and colatitude $\theta$ have the relationship $\varphi=c\theta,\quad c>0$, and the curve of Viviani corresponds to the locus of a geosynchronous orbit, $c=1$.

Is it really true that a polar geosynchronous orbit (displayed in a synodic or rotating frame) is described by Viviani's curve? Can this be demonstrated mathematically? 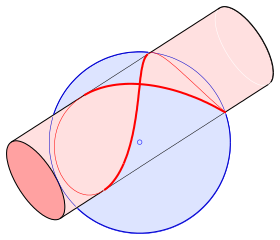 Brief answer: yes, it's possible. Here's a somewhat scrappy answer: this is pretty much a transcription of what I wrote down when working it out, so it's a bit messy: sorry.

First of all I'll use what I think is the mathematicians' version of spherical polar coordinates (apparently physicists use the two angle names swapped). So starting from a right-handed cartesian coordinate system $(x, y, z)$, the spherical polars are $(r, \theta, \phi)$, where

So let's set up an inertial coordinate system whose origin is the centre of the Earth (so this system is not rotating with the Earth). Obviously we'll take the Earth to be perfectly spherical, its density will be a function only of $r$ and the orbit of the satellite will be perfectly circular.

The satellite will orbit about the $y$ axis, so the coordinates of the satellite, if we pick $t=0$ suitably, are

OK, so now pick an Earth-based coordinate system, which does rotate with the Earth, $(R, \Lambda, \Phi)$. Here:

Again I've ignored a boring constant which defines the planet's angle at $t = 0$.

So we can project the satellite's motion down onto the surface of the Earth, and the projected path, in the Earth-based coordinates, is then

So then the trick is to project this last curve down onto the $X$-$Y$ plane (using capital letters for Earth-centred coordinates again). Using polar coordinates $(\rho, \Lambda)$ in that plane (I'm running out of variants of '$r$' here), then

So the projection of the curve followed by the satellite on the surface of the Earth looks like $(R_E \sin\omega t, -\omega t)$. To see that this is a circle, change to cartesian coordinates $(X, Y)$:

(I confess at this point to have lost track over whether these are the same $(X, Y)$ as above, but it does not matter).

And now we can use some trig identities:

And that means that yes, it's Viviani's curve.

Is it really true that a polar geosynchronous orbit (displayed in a synodic or rotating frame) is described by Viviani's curve? Can this be demonstrated mathematically?

So, we can conclude that the satellite follows a Clelia curve with $|\phi| = |\theta|$ . I'll leave the proof that this Clelia curve is actually a Viviani's curve to the maths' textbooks.

Not the answer you're looking for? Browse other questions tagged orbital-mechanics mathematics geosynchronous or ask your own question.

45
Are there any satellites in geosynchronous but not geostationary orbits?
14
Is an Earth synchronous (?) polar orbit possible?
10
Why do rockets launching to the ISS from Florida point at 45 degrees to reach a 51.6 degree inclination?

10
At which point would two GSO/GEO satellites with similar orbital elements be closest to each other?
30
Why is geosynchronous orbit an altitude, rather than a velocity?
1
Equation for orbital period around oblate bodies, based on J2?
4
Is Dawn's upcoming low periapsis orbit for XMO7 "resonant"?
10
Does the "17" really mean anything with respect to GNSS orbits being rational factions of a sidereal day?
8
How do stable equilibrium points work in GEO? If all geosynchronous spacecraft suddenly lost stationkeeping, would most "fall into" one or the other?
5
Difference between rotated frame and rotating frame