I don't understand this and must ask a probably very stoopid question here:

The Oberth effect says that a rocket is much more efficient when (and in the orbital direction of) a payload when it already has the highest speed. This AFAIK is because force, or "work", is a function of the distance moved and not of the time spent, while instead the force from a rocket engine is a function of time. So the faster a rocket is, the larger is the distance over which a rocket engine produce force during its fuel=time window.

This is obviously anti-intuitive to everyday human experiences. Something which is already fast, such as a fast car or airplane, is less, not more, easy to accelerate further for the same amount of fuel consumed.

What causes the Oberth effect? Is it directly given from Newtonian mechanics? If so, why did Oberth "discover" it 300 years afterwards? Has it got something to do with microgravity or rocket reaction propulsion? If we imagine a maglev train in a vacuum tube on Earth (i.e. no friction, no air resistance, no diminishing engine efficiency), would it get more and more energy efficient the more it is accelerated, because of the Oberth effect? 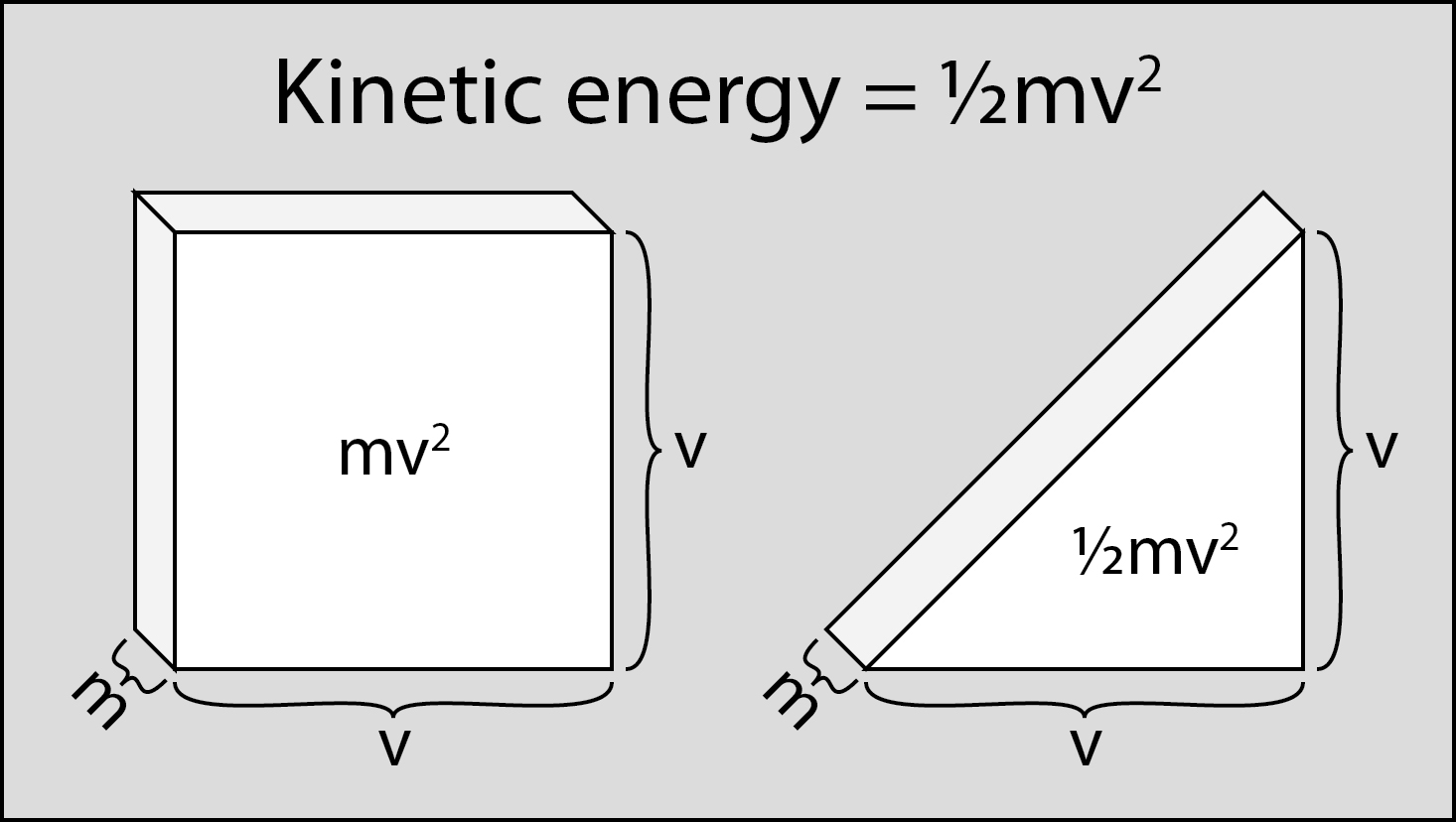 When you add to that velocity v, you get a bigger square: 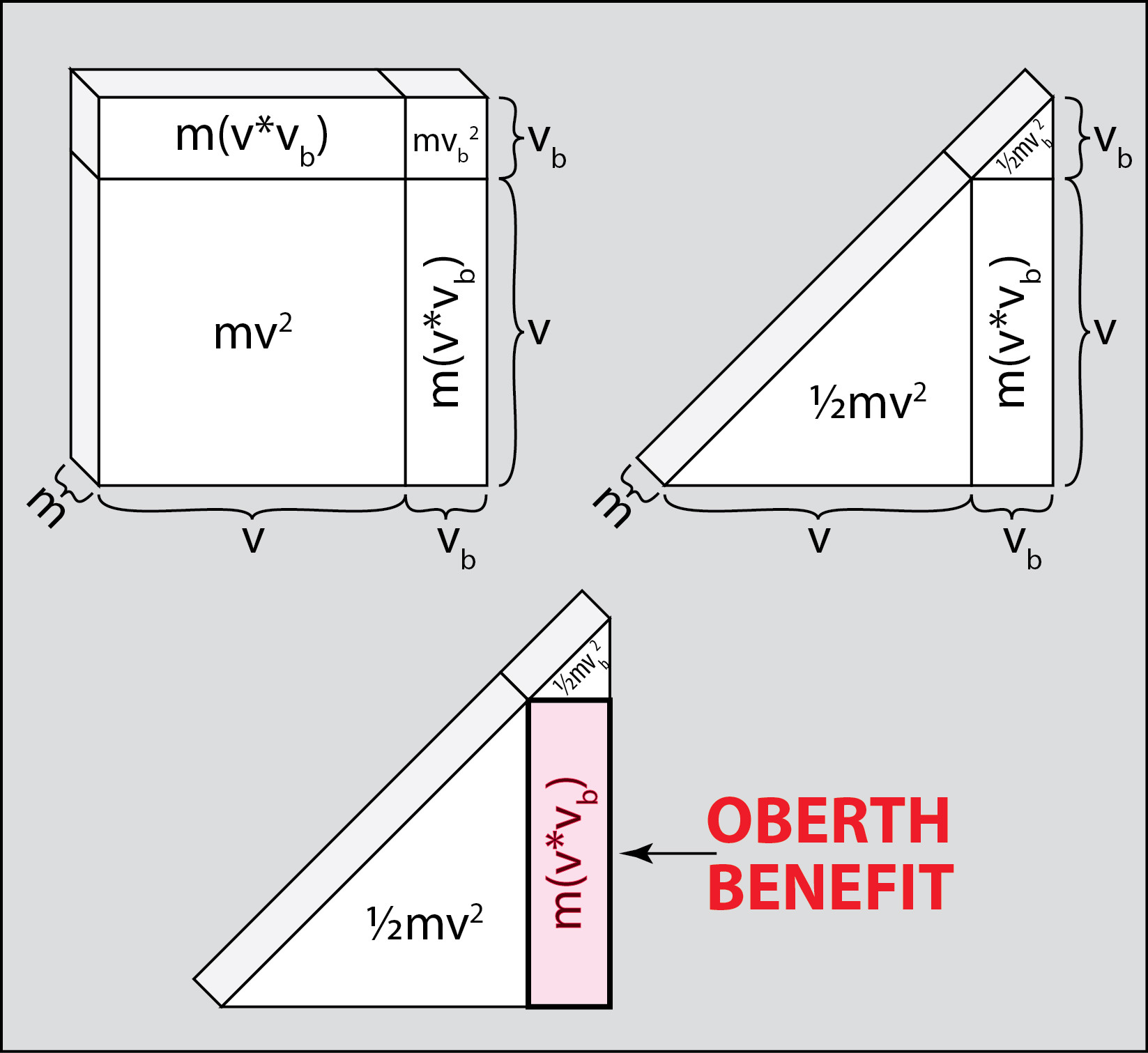 Here Vb is velocity imparted by your burn.

The basis of the Oberth effect is that kinetic energy goes up at the square of velocity but a rocket burn provides the same delta-v no matter what speed the rocket is moving at.

Assume a vehicle in orbit about some gravitational body. The Oberth effect says that the way to get the biggest increase in energy from a maneuver that changes the vehicle's velocity by some $\Delta v$ is to perform that maneuver at periapsis (i.e., when the vehicle is going fastest with respect to the gravitating body). The total mechanical energy before the maneuver is $E_0 = \frac{v^2} 2 - \frac {\mu} r$, where $\mu=GM$ is the gravitational parameter for the planet/star. Assuming an impulsive maneuver, the total mechanical energy after the maneuver is $\frac{(v+\Delta v)^2} 2 - \frac {\mu} r$, or $E_0 + \frac{\Delta v^2} 2 + v \cdot \Delta v$.

Mechanical energy is a constant over the orbit, and $\Delta v^2$ will be the same wherever the maneuver is performed. The only thing that does change is that last term, $v \cdot \Delta v$. To maximize the change in energy we want two things to be true: Velocity $v$ needs to be at its maximum (i.e., periapsis) and the $\Delta v$ to be applied along the velocity vector.

Something which is already fast, such as a fast car or airplane, is less, not more, easy to accelerate further for the same amount of fuel consumed.

A car that's going fast is already in a high gear where you naturally get less torque. It's also using a good deal of power just to keep going the same speed. Let off the gas and the car will slow down. There's not much power left for acceleration. A plane that is already going fast (with respect to the airflow) similarly is using power just to maintain speed. Spacecraft operate in vacuum, and it doesn't matter how fast a vehicle is already going when a vehicle performs a maneuver. For a rocket, delta V is delta V. It is independent of the current velocity.

One needs to be careful here. Imagine a rocket located in deep space, far removed from any gravitating bodies, about to test fire its thrusters. Suppose a number observers will watch this test, with different observers moving at different velocities relative to the rocket. Ignoring relativistic effects, all observers will agree on the rocket's change in velocity. The observers will not agree on how much the rocket's energy has changed. Some may even see the rocket as losing energy.

If we imagine a maglev train in a vacuum tube on Earth (i.e. no friction, no air resistance, no diminishing engine efficiency), would it get more and more energy efficient the more it is accelerated, because of the Oberth effect?

The Oberth effect isn't about efficiency so much as it is about effectiveness. An impulsive maneuver any along the rocket's orbit will instantaneously change velocity by the same amount, regardless of where the maneuver occurs. (For a non-impulsive burn, acceleration will be the same regardless of where the maneuver occurs.) The effectiveness of that change is the issue.

There are bound to be inefficiencies in a maglev system, even with a train running in vacuum. These inefficiencies will inevitably vary with velocity. In other words, acceleration from a given amount of power will be a function of velocity.

Not the answer you're looking for? Browse other questions tagged orbital-maneuver physics rockets oberth-maneuver or ask your own question.

9
Is a braking maneuver more effective at periapsis?
4
Chandrayaan-2; time taken to get to the Moon
2
Can someone help Scott Manley explain this Snoopy-capturing maneuver?