Can you make out the shape of the ISS with the unaided eye as it passes overhead?

Someone claimed to me that they could see the actual shape of the ISS as it passed overhead without use of any optical device. I would think this isn't possible since it is only about 100 meters wide but over 370 km in altitude. I read through this question already but I wanted to know if it was possible to discern the solar arrays or general shape of the station (assuming you're in a decently remote area).

Edit: This was claimed to have been observed recently, so it wasn't a case of a shuttle rendezvous with the station.

Having observed the International Space Station numerous times passing over the early night skies, on a clear night and when my eyes are rested (I stare a lot at monitors like I'd guess most of us here) having normal visual acuity (20/20 vision), I can assure you that your friend's claims are quite impossible even for an experienced amateur astronomer with many tricks up his sleeves, such as knowing how to use averted vision and observing the station when it barely reflects any light (usually farthest East during its early night sky when it would most likely start entering the Earth's shadow), to reduce atmospheric diffraction of high-contrast close bright sources on a dark background reducing into a single point of light: 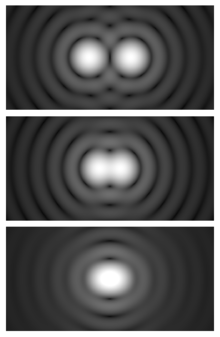 But before we even consider what other limitations to discerning features of a distant object might there be, let's first see what's still reasonably plausible for a human eye. So the question is, what's the human eye's resolution and the minimum spacing between two bright objects at the ISS orbital altitude (370 km or 230 mi)?

According to Human Photoreceptor Topography, Curcio et al., 1990 (PDF) that lists several sources as well as own measurements of the spatial density of cones and rods in whole-mounted human retinas, the greatest cone density recorded was 324,100 cones/mm2. That gives us acuity (or row-to-row spacing we need to discern at least two individual features) of 86.3 cycles/°. So for our best case, with a great eye, neglecting any atmospheric effects, the ISS right above us when it's closest, and optimal contrast with the background sky, we get minimum separation of objects of 74.83 m. If there was no air between the observer and the station!

So while 74.83 m seems just about right with the ISS truss length at 109 m (and solar panel arrays stretch a bit further than its truss, so their two sides' center spots would indeed be separated about that much), we shouldn't forget that there is about as much matter in between the observer and the subject that the observer is looking through, as if he was looking through roughly 10 meters of water. So indeed, the two sides of the ISS would be quite impossible to discern, even from a high altitude observation point, no air or light pollution, and extremely clear night.

It is however still possible that your friend isn't making anything up, saw an iridium flare of two closely following satellites flying in formation, and confused them for the ISS. Those are not that rare, I've seen two such double iridium flares just last month, and I can assure you that I was not that bored to constantly look at the night skies. Those double (or sometimes triple, quadruple,...) flares of satellites flying in formation can look something like this (long exposure taken with a zoom camera): 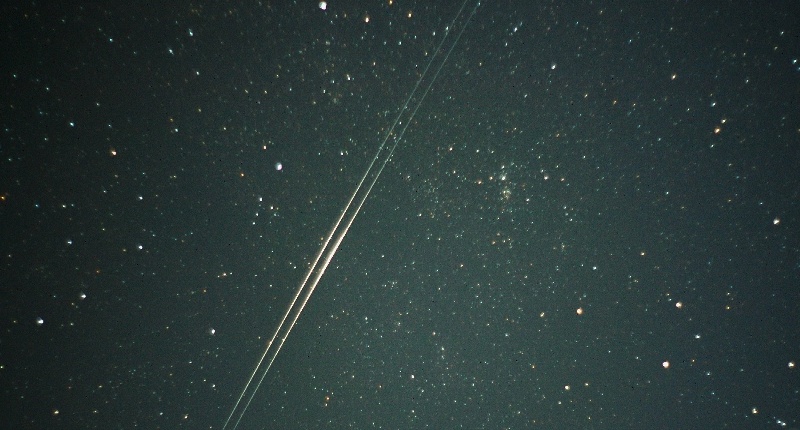 Inexperienced observer could easily confuse these for a single object, since they appear to move as if they were connected to each other, like the ISS solar panels are via its truss. They move exactly like you'd expect of Low Earth Orbit satellites (like the ISS) to move, which is of course because they are. And they can be as bright as the ISS. But they do keep a bit larger distance to each other than the ISS's roughly 100 yards. Actually, there's a lot less space between the ISS solar panel arrays, since that's approximately its total length.

Human vision has an unaided resolution (typically) of around 0° 4'.

Each "pixel" is roughly 430 m. That the station is visible at all is a simple matter of brightness.

To get a visible shape reliably would require a roughly 10x scope, at which point the image would be between 1 x 2 pixels and 3x3 pixels, depending upon where exactly it falls - sufficient, over time, to infer shape.

Even at the fovea, where peak individuals have been noted to have as narrow a discrimination as low as 0° 0' 21" of arc resolution, the peak resolution would be about 21 m per pixel. Still only about 4x5 pixels worth, at the very peak.

Note also: human shape discrimination isn't a continuous field of uniform resolution, but a variable field ranging from about (typically) a ≤1° zone of 1' resolution through an outer band of ≥1° per cone at the very edges. To make out the station at peak is barely doable, but only if looking right at it and then only while it remains within the narrow view of the central fovea.

In addition to the other answers: you could actually test this yourself.

If you assume an average distance of about 370km, that would scale down to roughly 170m.

While this won't take atmospheric effects into account, it still should be somewhat accurate.

1
Is it possible to see ISS solar arrays with naked eye, from earth?
45
Can I see the ISS from the surface with the naked eye?
21
Is it safe to observe the ISS with the naked eye?
22
Why does the International Space Station have a downward facing light?
10
What is a "Double Iridium Flare" and how close can the two satellites be?