Why is there a Saturn V in the background of this Gemini-Titan launch?

In this photo, a Gemini-Titan is lifting off in the foreground, while a Saturn V is visible in the background. 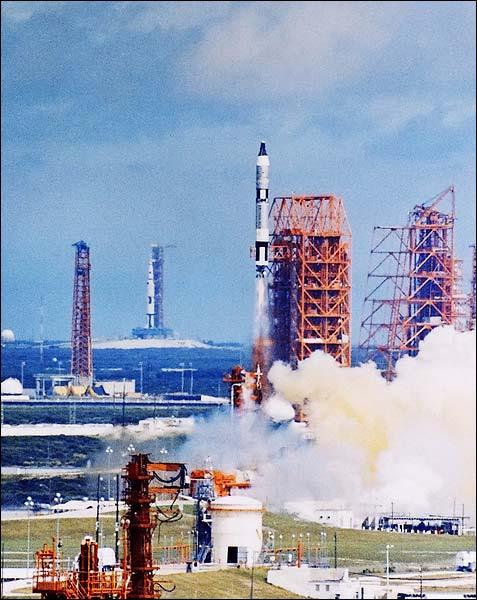 The last Gemini flight was in late 1966, but the first flight of a Saturn V wasn't until November of 1967. Why was a Saturn V assembled on the launch pad a year before it was to fly?

The photo is of the launch of Gemini 11 on September 12, 1966. The Saturn V in the background is SA-500F, a "Facilities Integration Vehicle". This was a nearly complete Saturn V that was used to test integration with the launch facilities at Kennedy Space Center:

Tests included the mating of the Saturn's stages in the Vehicle Assembly Building (VAB), the fit of the service platforms, the launcher-transporter operation, the propellant loading system, and the test connections to the mobile launcher and support equipment.

Its three stages duplicated the flight configuration, ordnance, and umbilical connections of their live counterparts. Although inert, the retrograde rockets, ullage rockets, and shaped charges had the dimensions of the live ordnance to let the launch team practice ordnance installation. The first stage only had one real F-1 engine, and the inter-tank section of the first stage had a different paint scheme than flight vehicles. The third stage had a paint scheme partially matching the Saturn 1B, for which it was originally made.

The SA-500F was on the pad at Launch Complex 39 from May to October 1966, with a brief return to the VAB in June to avoid Hurricane Alma. After it was "de-stacked" on October 21, its stages met separate fates; the first stage was put into storage and eventually scrapped; the second stage replaced the destroyed second stage of the SA-500D dynamic test article after a test stand accident, and is now part of the Saturn V display at the US Space & Rocket Center; the third stage went on to become a dynamic test article for Skylab, and was scrapped some time later.

8
Why were ejection seats used in Project Gemini instead of a tower escape system?
16
In the Saturn V launch sequence, what defined COMMIT, and what happened between COMMIT and LIFTOFF?
31
Why was this Saturn rocket elevated for launch?
4
How many people spoke to Apollo 8 from outside the US?
14
Why was the Saturn V considered to be human-rated after Apollo 6?
20
Why weren't Gemini capsules given names?
5
Was lunar module “pilot” Harrison Schmitt legally a “pilot” at the time?
3
How to identify an object in orbit last night?
27
How did they access the LM to mount the flag package while the Apollo stack was already on the launch pad?