How difficult is it to convert a hypergolic based Moon human lander to a cryogenic one?

Recently a study performed by Aerojet Rocketdyne indicated that in order to achieve a 2024 landing using storable propellants will be required. Given that NASA is looking to reduce program risk in any way possible to achieve 2024,(seen in the removal of Gateway from the necessary path) it seems likely that they will favour a hypergolic based lander if it can reduce risk of missing the 2024 date.

However NASA is also looking to make the architecture sustainable, and part of the requirements of the HLS is that it can be iterated upon to make it a sustainable way of reaching the surface by 2028. From what I can tell cryogenic fuels are better for this, as they are able to be produced by in situ resource utilisation (ISRU). (though this is speculative)

So could a lander system be designed initially using hypergolic fuel switch to a cryogenic fuel cycle like hydrolox without major redesigns of the craft?

There will likely be significant differences in the required tankage, if nothing else.

The paper Lunar Lander Conceptual Design shows a comparison between landers with similar payload requirements and different engine systems. Note the different in tankage and propellant weights for the two options. 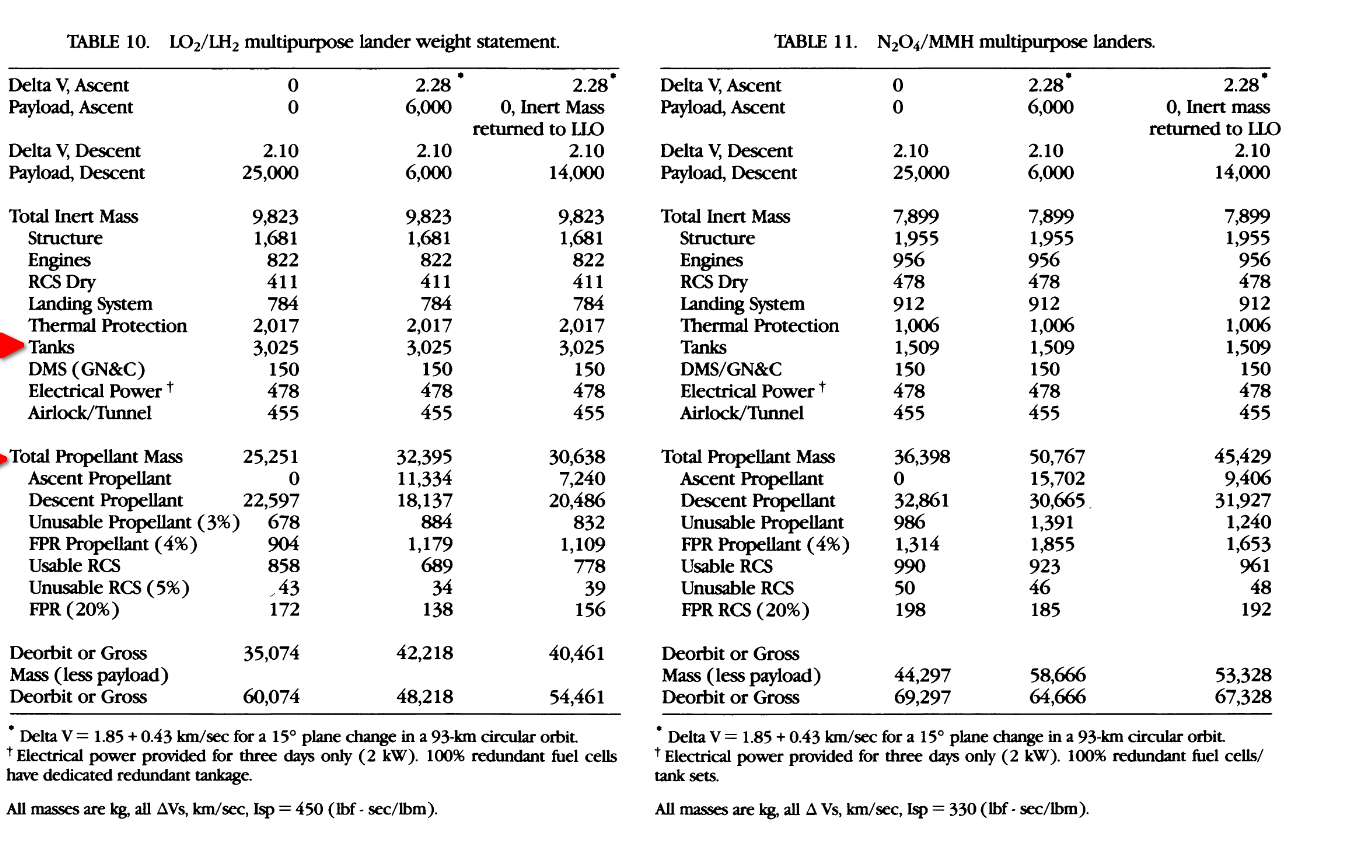 A lander with storable propellants needs to keep them at close to room temperature, for a minimum of several days. A hydrolox system will take up much more volume due to the low density of LH2, and that big LH2 tank has to be kept at around 20 K.

You are going to need a major structural redesign just to deal with the greater volume of the liquid hydrogen tank, and major changes in thermal balance and insulation to deal with the fuel being nearly 300 K cooler than the rest of the craft and keep it from boiling off too quickly. And then you're going to need completely different engines, since piping LOX and LH2 into a pressure fed hypergolic engine isn't going to do anything useful.

The cryogenic version is going to be a new craft, at most reusing parts of the hypergolic design that aren't related to propulsion.

Apart from the mechanical aspects of tankage, ullage, ignition, and the like, there's a significant safety issue. Unless you're starting a Moon colony, the "and return them safely to Earth" bit is pretty important.

Hypergolic engines can be made extremely simple and reliable -- the Apollo LM ascent engine was basically a pair of valves, a combustion chamber, and a nozzle. About the only failure mode was one or both of the valves failing.

Cryogenic engines are significantly more complicated -- at a bare minimum, you need to add an ignition system. The LM ascent engine as a single point of failure was considered acceptable because of how reliable it was. With a cryogenic engine, you're going to need to make plans for dealing with the engine failing to ignite.

The Apollo Lunar Module used a propulsion system ignitable in zero gravity. To seperate fluid and pressurizing gas within the tanks for fuel and oxidizer, an elastic diaphragm was used.

But at cryogenic temperatures the use of an elastic diaphragm is very difficult if not impossible. Especially at very low temperature of liquid hydrogen.

The combination of a hypergolic engine with a cryogenic engine to settle the cryogenic liquid gases in the tanks before starting the cryogenic propulsion would be too complicated, heavy and unreliable.

Storing hydrogen and oxygen as supercritical fluids as done for the fuel cells of the Apollo Service Module would require very heavy tanks for high pressure and a new engine design to use supercritical or gaseous propellants instead of cryogenic liquids.

A very simple and very reliable propulsion system with redundant plumbing and valves would be needed for a manned lunar lander. Hypergolic systems did work very well during the Apollo and Shuttle missions.

Not the answer you're looking for? Browse other questions tagged lander cryogenics hypergolics artemis-program or ask your own question.

6
Why can’t cryogenic propellants be storable, at least on the ground, via refrigeration?