How to estimate that receiving GNSS signals Earth while orbiting the Moon will still provide locations to about 200 meters of uncertainty?

IEEE Spectrum's Can Astronauts Use GPS to Navigate on the Moon? NASA Scientists Say Yes says:

Kar-Ming Cheung and Charles Lee of NASA’s Jet Propulsion Laboratory in California did the math, and concluded that the answer is yes: Signals from existing global navigation satellites near the Earth could be used to guide astronauts in lunar orbit, 385,000 km away. The researchers presented their newest findings at the IEEE Aerospace Conference in Montana this month...

Cheung and Lee plotted the orbits of navigation satellites from the United States’s Global Positioning System and two of its counterparts, Europe’s Galileo and Russia’s GLONASS system—81 satellites in all. Most of them have directional antennas transmitting toward Earth’s surface, but their signals also radiate into space. Those signals, say the researchers, are strong enough to be read by spacecraft with fairly compact receivers near the moon. Cheung, Lee and their team calculated that a spacecraft in lunar orbit would be able to “see” between five and 13 satellites’ signals at any given time—enough to accurately determine its position in space to within 200 to 300 meters. In computer simulations, they were able to implement various methods for improving the accuracy substantially from there.

All of the GNSS constellations fit within a 60,000 km sphere close to 400,000 km away from the Moon, which puts them in a 8 degree wide circle. No wonder the resolutions would be hundreds of meters at best, even with higher gain antennas than we use on Earth.

But how can that figure of "within 200 to 300 meters" be estimated? Is there some way to show quantitatively that the same effects that results in several meters of uncertainty on Earth naturally translates to several hundred meters at the distance of the Moon?

The DOP calculation is well described on wikipedia and here I am using the positional DOP (PDOP).

PDOP values have no units and are just ratios of positioning error to measurement noise [1]. GNSS modules often give an accuracy specification in meters and the product of this specification and the PDOP give the positional accuracy. Importantly, PDOP is independent of the quality of GNSS receiver used, it is only dealing with geometry. The wikipedia article gives an interpretation guide that puts a threshold of ~50 on usefulness.

I ran the simulation with 100,000 points and this is what the distribution of PDOPs were: 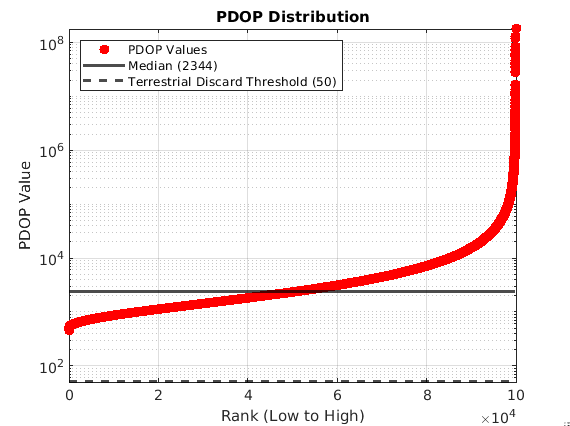 Median values of PDOP are typically in the low 2000's which puts the required terrestrial accuracy specification at around 10 cm. This doesn't seem too far fetched, and is routinely achieved on Earth (albeit with augmentations like base stations), from GPS.gov:

High-end users boost GPS accuracy with dual-frequency receivers and/or augmentation systems. These can enable real-time positioning within a few centimeters, and long-term measurements at the millimeter level.

The 200-300 meter accuracy can be estimated by finding the typical (median) PDOP at lunar distances and multiplying by a specified positional terrestrial accuracy of ~10 cm.

Not the answer you're looking for? Browse other questions tagged the-moon navigation gps gnss cislunar or ask your own question.

19
What is the deepest position in space we can get a GPS signal?
5
Is there a way (working or in development) to track satellites in lunar orbit like we track objects in Earth Orbit?
13
Will Glonass, Galileo, or BeiDou-2 satellites provide better cis-lunar navigation than GPS?
3
Lunar satellite navigation system
1
Has GPS been used beyond GEO?

6
Is NICER/SEXTANT the first civilian "spacecraft" to determine it's own position in space without GPS or uplinked data?
3
Lunar satellite navigation system