What is the MXP-351 storable bipropellant?

Masten Space Systems has a proprietary hypergolic bipropellant called MXP-351 intended for use in the XL-1 lunar lander. We seem to know the following information:

Since it's proprietary, it's probably impossible to pin down the exact composition, but can we narrow down the possibilities? I assume NTO, nitric acid, and perchlorates are too toxic, so the possibilities for oxidizer seems to be really limited-- maybe hydrogen peroxide?

Until Masten Space Systems reveals the exact composition of the propellants, we can only speculate on the combinations they used. Based on what you have presented in question we can rule out options one by one, but we cannot be 100% sure – especially for fuels because if we miss the oxidizer, we’ll miss the fuel as well.

The smoking gun here is a sentence “prepared propellants sitting in open containers don't require a respirator”. It's a phrase often used by authors to promote propellants which may be toxic, but have a low vapor pressure (meaning they don’t fume) – therefore, they would not poison those who work with it by inhalation, even if they work without protective equipment. It’s often used as an advantage for HTP: although its fumes are toxic/irritant, the compound has low vapor pressure, and therefore will cause no harm to workers.

When we speak about storeable non-cryogenic hypergolic oxidizers, there are essentially 4 options:

The first two acids have “fuming” in their names, suggesting that they have very high vapor pressure. At the same time, these fumes are toxic irritants. Dinitrogen tetroxide is a liquefied gas which boils at 21 °C – and it is very toxic as well. These first three oxidizers are actually in practical use today, and many studies are searching for replacements. Therefore, I find only hydrogen peroxide as a viable option to satisfy all requirements from question. Plus, Masten Space Systems confirmed that they use same precautions for handling their propellants as for handling HTP.

HTP is a good choice due to its moderate toxicity, high density, low vapor pressure, and exothermic decomposition to water and oxygen. Pure hydrogen peroxide is the most stable, but has freezing point -0.43 °C, and there is low confidence in storing pure peroxide safely, sans additives, for years. Because catalytic decomposition is not in consideration, I think that small amounts of freezing depressants and stabilizers would improve the use of peroxide in space – providing stability for multiple years without significant impact on the fuel/oxidzer’s vacuum ISP. To achieve short ignition times, many studies show that the concentration of HTP should be in 94-98% range. It is possible to use sodium salts as stabilizers (e.g. sodium stannate together with sodium nitrate) – a combination known to significantly increase the storage life of HTP. Persulfates, ammonium nitrate (AN) and ammonium dinitramide (ADN) could also possibly be employed in deep space missions as freezing-point depressors for HTP – although they will increase ignition times and lower the ISP due to the resultant sub-optimal oxygen balance. Regenerative cooling of the rocket engine is out of question if AN and possibly ADN are used, because they can decompose explosively. Considering that the Masten Space lunar lander is not designed to survive lunar nights, mixing in several percent of water with a proper selection of storage materials of 1 class compatibility – along with proper passivation of these materials and good thermal isolation – may be just fine.

Regarding fuels which are hypergolic with HTP, there are two types: catalyst-driven fuels, and reaction-driven fuels. In first, a catalyst dissolved in the main fuel decomposes hydrogen peroxide into oxygen and water, and then the hot oxygen reacts with the main fuel. A list of possible catalysts: 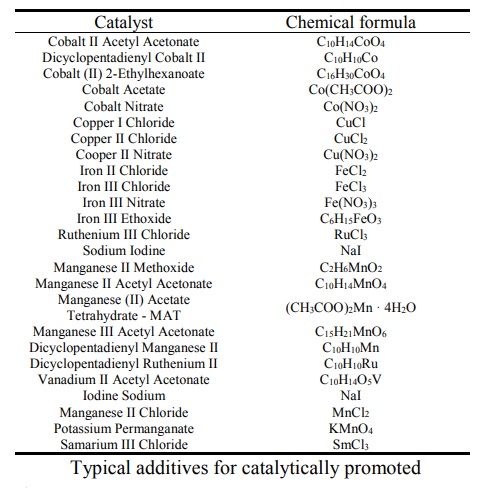 In reaction-driven fuels, the hydrogen peroxide reacts directly with either the fuel itself or reducing reagents dissolved in the fuel. Reducing agents are highly energy-dense, and increase the energy output of the primary fuel, but generally have poor solubility in the mix. These solutions are usually transparent liquids. A list of reducing reagents:

Theoretical ISP of MXP-351 is 322s – which is very close to MMH/NTO ISP (96%). This is pretty high ISP for a hypergolic and could not be achieved easily using HTP. The fuel must have at least one of these requirements: a high hydrogen content, a high positive enthalpy of formation (achieved through nitrogen energy carriers e.g. N-N, N3 or high strain energy between carbon atoms), or a composition of hydrocarbons of B, Al, Li, Si – which are energy-dense when they combust with oxygen. Also, the fuel must not degrade when reagents are added during storage. In the case of reaction-driven fuels, they shouldn’t be sensitive to moisture.

I found are several proprietary fuel blends mentioned in research papers that are close to this level of ISP: 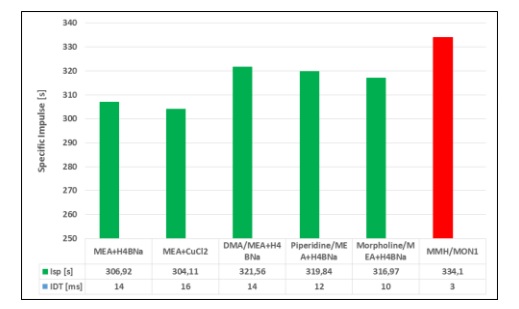 And at the end, there has to be space left for the notion that Masten Space Systems, with their inventiveness and creativity, didn’t follow any of these recipes, and came up with their own unique combinations – and therefore rightly do not want to reveal the specifics of their invention.

4
What is the spherical tank in this drawing of the BFS?
20
What was the reason to use different fuel for the Apollo Service Module propulsion system and reaction control system?
19
Does the Soyuz spacecraft use chemically stabilized hydrogen peroxide (H₂O₂) to remain ISS-dockable for 200+ days?
9
Why can’t cryogenic propellants be storable, at least on the ground, via refrigeration?
7
What is Tesseract's "secret sauce"? (green propellant)
18
Is the EU really banning "toxic propellants" in 2020? How is that going to work?
5
Why does it take Spaceway 1 (satellite) two or three months to dump 73 kg of bipropellant?
9
Using water as a high density storable hydro-lox propellant
3
What is the products of a catalyzed reaction between Hydrogen Peroxide and Ethanolamine with Copper(II) Chloride?