On what kind of martian soil or rock will the Perseverance rover drop its helicopter?

The image below is cropped from the high resolution version of NASA's Mars Helicopter and Perseverance Rover PIA23824 and shows the helicopter in it's stowed position on the underside of the rover next to one of the rover's wheels.

The Mars Helicopter, visible in lower center of the image, was attached to the belly of NASA's Perseverance rover at Kennedy Space Center on April 6, 2020. The helicopter will be deployed onto the Martian surface about two-and-a-half months after Perseverance lands.

For more information about the mission, go to https://mars.nasa.gov/mars2020/.

Question: What are the constraints on the soil or regolith at the "drop point" where the helicopter will be allowed to fall to the ground and I assume after the rover drives a safe distance away, will have to take off from? Can the soil be too coarse or too fine? Or will they look for a clean, flat rock surface instead? 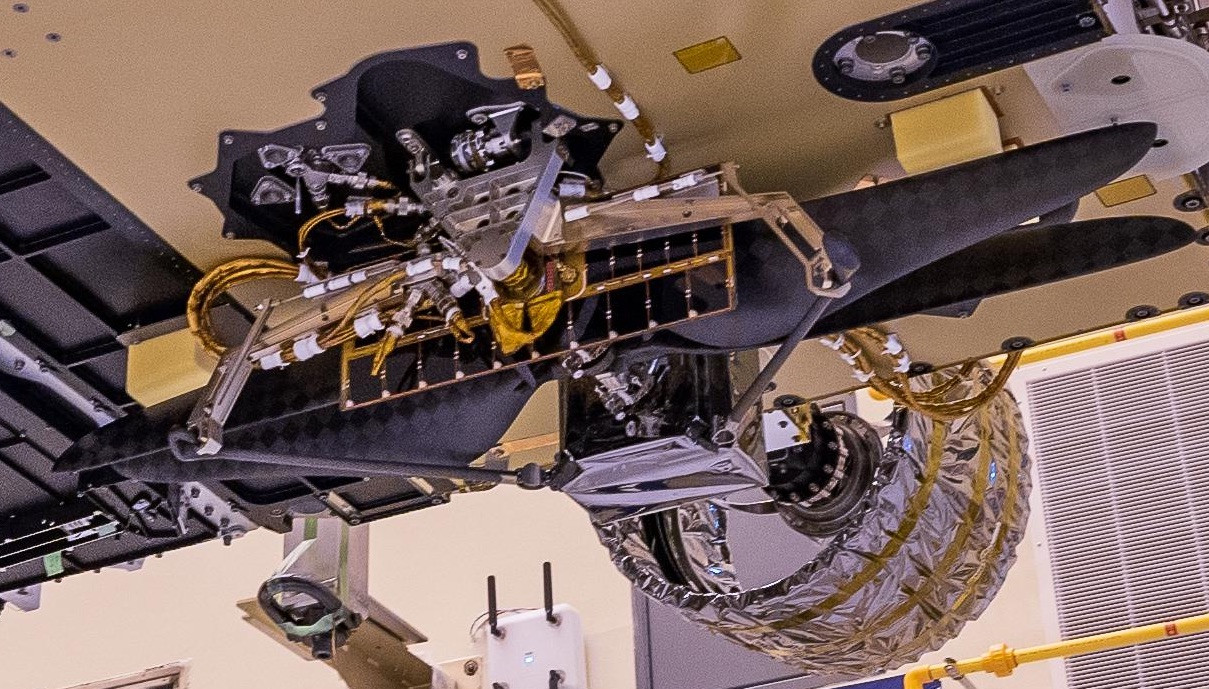 click for full size or visit the NASA page linked above

On what kind of martian soil or rock will the Perseverance rover drop its helicopter?

A flat surface made from pebbly regolith and some small exposed flat rock, but with enough texture for the helicopter's navigation cameras.

The first image shows a detailed image of the soil under the rover where the cover was dropped, the second shows the "runway" where Ingenuity's first flight(s) will be executed, from the

So that area naturally needs to be flat and it needs to have few obstacles; rocks and the like, that could pose a danger to the helicopter on landing.

And that area should be situated within a larger flight zone. The flight zone is where the flights themselves will happen… and we’re looking for something that has enough texture. That means things that the helicopter can look at with its cameras while it’s flying in order to keep track of where it is at.

So we began to look for an airfield and a surrounding flight zone, first using satellite imagery, and then as it became available, images taken by the rover itself, after it landed.

These areas would have to have low slopes and sufficient surface texture for accurate tracking by the demonstrator’s navigation filter during flight and few rocks higher than 5 cm to interfere with its landing. The rover would need to image the area being considered at higher resolution than from orbit using stereo rover Navigation camera images to determine if it meets the requirements. If the area for landed helicopter operations is a patch about 10 m × 10 m and outbound sorties lengths are 100 m, then analysis of orbital images and stereo digital elevation models indicates that the rover would need to traverse less than 200 m in over 90% of the landing ellipses to find suitable areas for deploying and flying the helicopter

The debris shield, a protective covering on the bottom of NASA's Perseverance rover, was released on March 21, 2021, the 30th Martian day, or sol, of the mission. The debris shield protects the agency's Ingenuity helicopter during landing; releasing it allows the helicopter to rotate down out of the rover's belly. This image was taken by the WATSON (Wide Angle Topographic Sensor for Operations and eNgineering) camera on the SHERLOC (Scanning Habitable Environments with Raman and Luminescence for Organics and Chemicals) instrument, located at the end of the rover's long robotic arm. 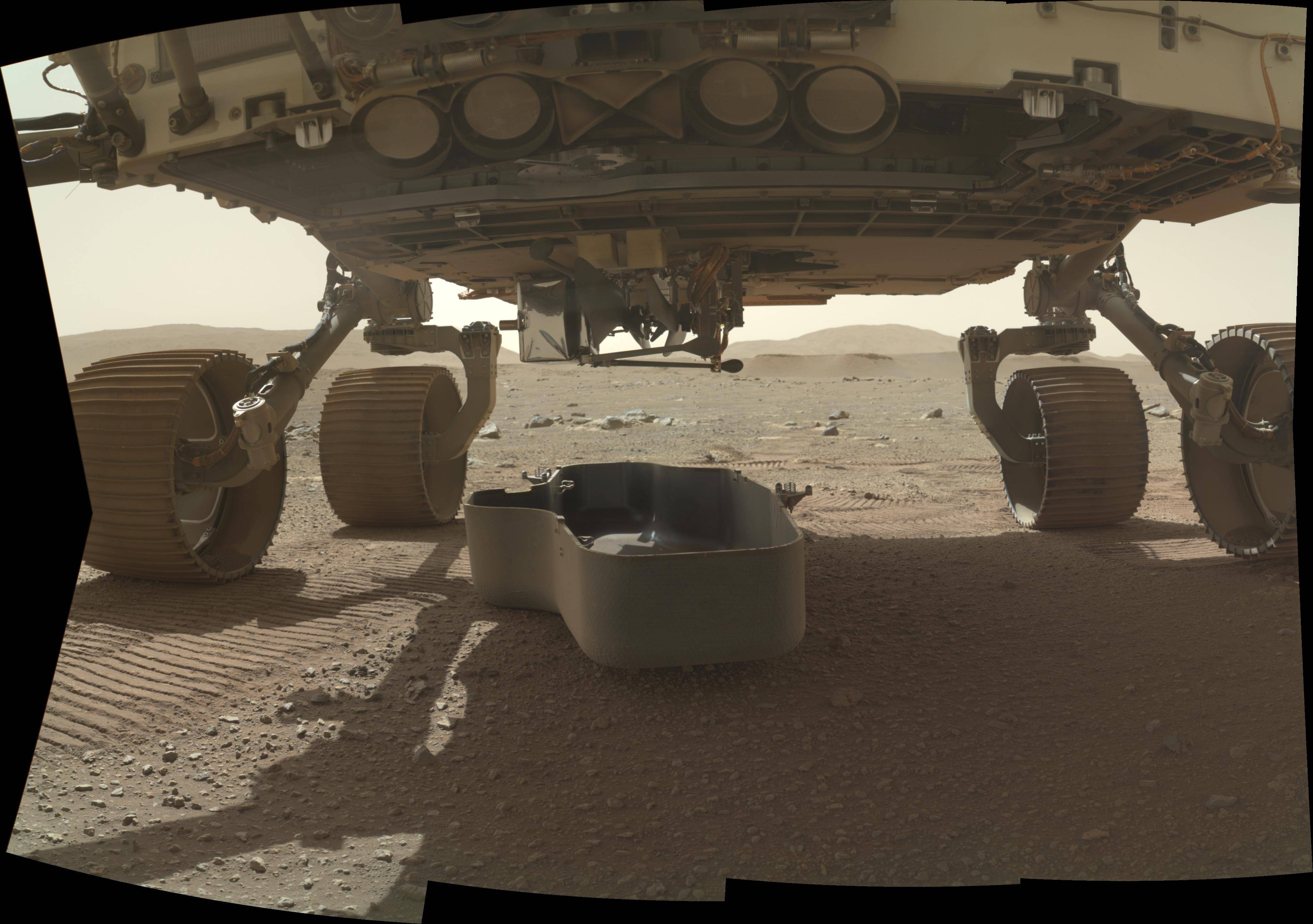 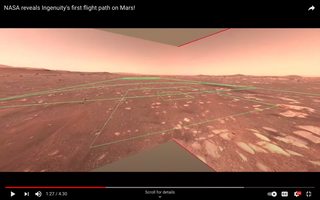 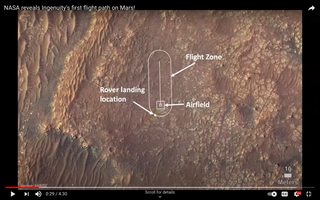 Not the answer you're looking for? Browse other questions tagged mars rovers regolith perseverance helicopter or ask your own question.

3
Why not a landing platform with solar cells on the Mars 2020 rover for the helicopter scout?
9
Why does the Perseverance rover have such complicated shaped spokes in its wheels?
7
Perseverance Rover to drive carefully for months while helicopter hangs from underside?
12
Why make Ingenuity survive some "brutally cold Martian nights" before its first attempt at flight?
2
Are the Perseverance rover's "drivers" working on Martian sols or Earth days right now?
4
Are Perseverance's wheels really this big?
8
Why is there a black donut in Perseverance's SkyCam? Is it always used to block the Sun? (sky cameras on Earth don't) How does it work?