Why must “Mercury’s core (be) partially molten” to explain its weak magnetism?

Earth’s magnetic field is generated by the fast spinning of its liquid iron core. As for Mercury, scientists used to think that the core, due to the planet’s small size, must have cooled down and solidified since the planet’s formation. Is that really the case? Johannes Benkhoff explained:

Mercury’s core must be partially molten to explain this magnetism. We can also measure tides on the surface of Mercury, suggesting there must be liquid inside the planet. As Mercury orbits around the sun and interacts with its gravity, we expect a bulge to form and change its size while moving around the sun.

Question: Why must "Mercury’s core (be) partially molten to explain this magnetism"? If Mercury's core solidified, why couldn't have a frozen-out residual magnetization 100 times weaker than Earth's? It's core is huge compared to the diameter of the planet, so even a weak residual magnetization would be detectable in orbit near the surface.

Even iron that cools on Earth has residual magnetism, this is how we know it's field has reversed so many times. 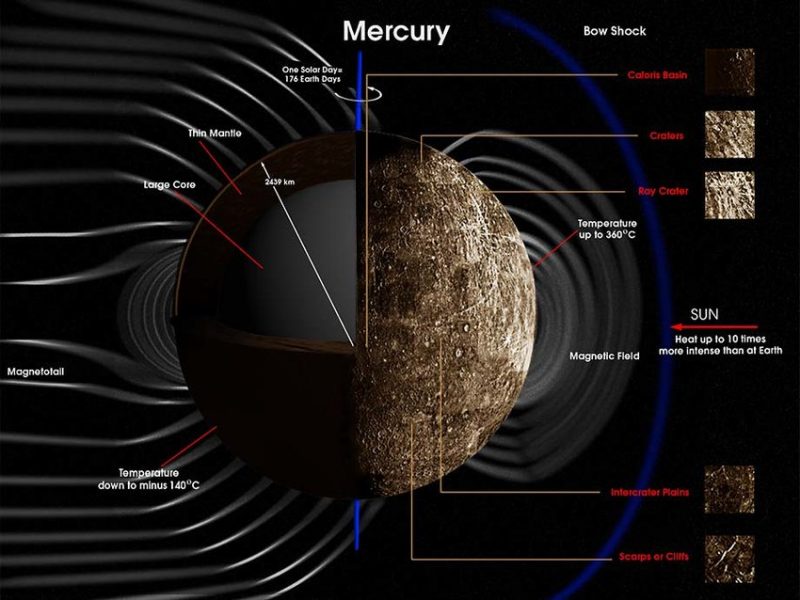 Mercury’s magnetic field and the strong asymmetries introduced by its interaction with the solar wind. Image via ESA.

tl;dr: because any solid iron would still be above the Curie temperature and so unable to retain any residual magnetization.

The magnetic phenomena associated with liquid metal in (the cores of) planets is a bit different from what we see in a solid metal. Solid iron is ferromagnetic up to a temperatures of $770°C$ or so, depending on impurities, but planetary cores are too hot for that and thus a solid core can have only random magnetic fields that don't give a macroscopic ferromagnetic behavior. Breuer et al. presents a model in which the internal temperature rises above $1500°C$ within the mantle, implying that the core has also remained that hot and thus solid iron would not be ferromagnetic.

When you have liquid metal, or any electrically conductive liquid, things change. The flow of an electrically conductive fluid can amplify these random magnetic fields and produce a macroscopic magnetic field. This can happen even when the conducting liquid is not ferromagnetic, which includes the case of iron under the hot conditions in the core of Mercury (or Earth). This effect demonstrated here with sodium; even a modest liquid flow can generate magnetic fields. Thus when magnetic fields emerge from the interiors of planets, the most likely source is not a seemingly ferromagnetic solid metal but the flow of an electrically conductive liquid. The model of Mercury presented in Ref. 1, above, also predicts a partially moten core (the amount of melting depends on the sulfur level in thd core). David Hamman points out in comments that space exploration probes have found independent evidence for molten core materials on several bodies, including Mercury.

Note that the liquid must be "electrically conductive", but not necessarily a metal. An example of a nonmetallic conducting fluid could be a salty ocean such as that appearing to exist in Europa; Galileo actually detected a magnetic field around Europa which adds evidence for this ocean. At Mercury, however, the only likely conducting fluid is the metal in the cores so the magnetic field is taken as evidence for molten metal in this core.

Not the answer you're looking for? Browse other questions tagged planetary-science magnetic-field mercury bepicolombo or ask your own question.

14
How will Juno establish existence of solid core within Jupiter and determine its size?