Listening to the mission control audio loops on Apollo In Real Time in the immediate aftermath of the Apollo 13 explosion, I hear flight director Kranz asking about "delogs":

From the context I assume it might be something to do with reviewing telemetry data, but I have never come across the term "delog" in my Apollo studies before.

Kranz keeps returning to the topic:

At the shift change, with Kranz's team handing off to Glynn Lunney's, he mentions the delogs again:

What's a delog, and why is Gene Kranz concerned with it half an hour after the explosion?

While the Mission Control Center's (MCC) Real Time Computer Complex (RTCC) was designed, as the name says, to receive and process data to the consoles in real time, it also recorded the voice and telemetry data ("logging").

"Delogging" was the the process of going back into the recorded data and extracting desired parameters for a specified time period.

I couldn't find a reference for the Apollo MCC, but here is one describing the logging/delogging functionality for the early Shuttle MCC.

5.3.2.2.10 Logging. The checkout software logging function shall provide the capability for recording data on magnetic tape for historical and/or analytical purposes. This function shall pro­vide a means for selectively logging data at each of the data mon­itoring points within the checkout system. Logging shall be se­lective in nature; such that hardware interface, data flow (input and/or output), and data type parameters may be specified. Appli­cation tasks shall initiate data logging requests to the logging task to perform the required logging functions. All-tape control and data blocking functions shall be performed by the logging task, while all logging control and data building functions shall be performed by the applications tasks. The checkout system shall use the ALT NIP TPC logging software.

5.3.2.2.15 Delogging. The checkout software delogging function shall provide the capability to selectively delog the contents of checkout system log tapes that have been created as described in paragraph 5.3.2.2.10. This function shall be performed as a back­ground delogging task and requires no application software inter­action. Delogging shall be selective in nature, such that data type, data format, and start/end time parameters may be specified to control the format and content of the delog line printer out­put. The TCOS shall use the NIP operational delog software.

Kranz is enquiring about going back into the recorded data from the time of the explosion and pulling data from it. From this Apollo Experience Report, it sounds like back then the delog consisted of printed replicas of the controller's screen formats at 1 Hz intervals.

For special events and particular problem times, printouts (DELOG) can be made of the display television formats by personnel in building 30.These will cover the complete format page once each second.

The Apollo 13 Final Report Panel 3 Flight Operations and Network Addendum 1 mentions such a delog (this is likely the exact one Kranz was talking about, since it appears to be the time of the explosion):

A study of a RTCC DELOG during this time frame revealed the following: 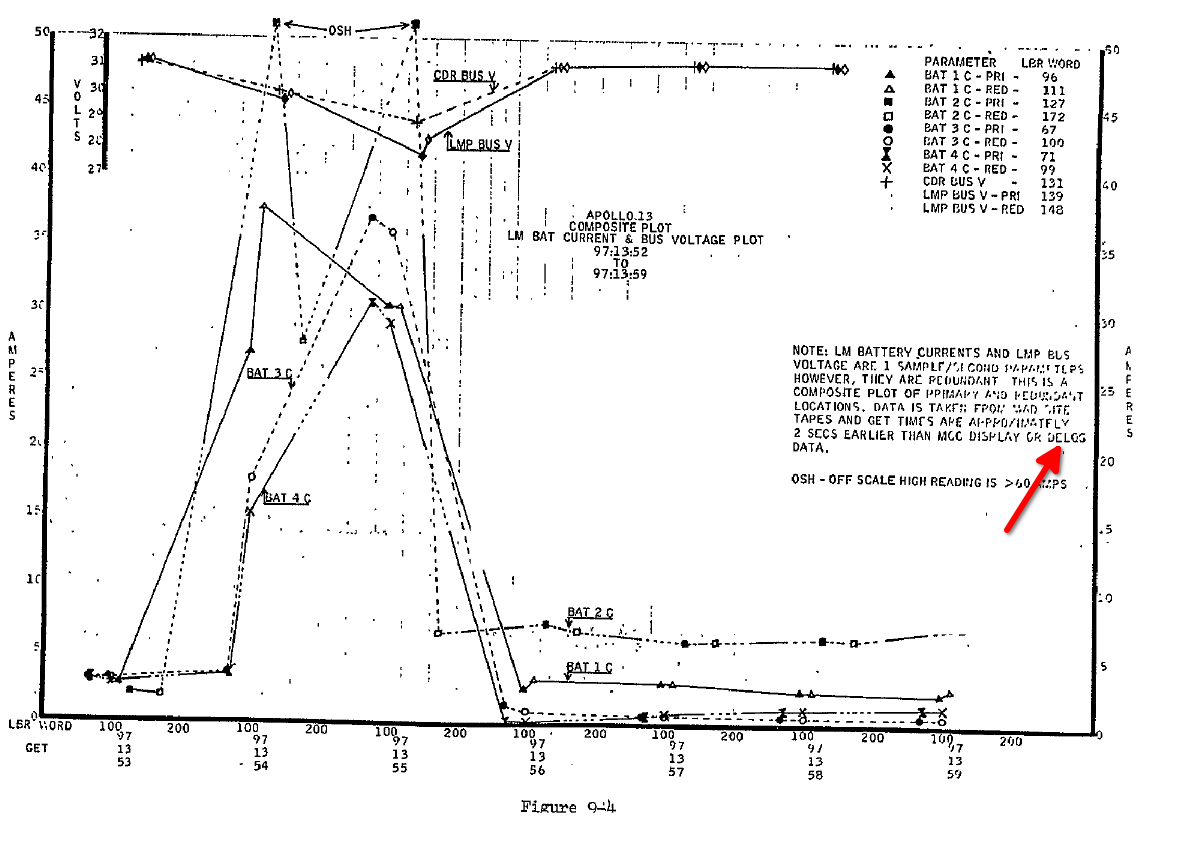 This MCC Progress Report from 1969 mentions that the function has been added, but gives no details.

Not the answer you're looking for? Browse other questions tagged apollo-program apollo-13 mission-control or ask your own question.

20
Could an Apollo LM land uncrewed?
16
Was there any “practical” advantage to having different crews for each Apollo landing?
5
How did the Apollo Service Module reenter?
7
What Soviet signals (if any) attempted to scramble communication and sabotage Apollo missions?
13
Reentry without pressure suits in Apollo: was there a formal risk assesment?
5
How hot was the surface of RTG radiator which powered ALSEP on Apollo-12?
16
Apollo altitude vs rate-of-descent schedule
3
Confusion with Apollo CSM attitude maneuvers (roll, pitch and yaw) during coasting to/from the Moon
4
Why did Charlie Duke catch the brass ring?