Were more lunar module LiOH cartridges just a spacewalk away?

The modularized equipment stowage assembly (MESA) was a drawer in the base of the lunar module descent stage which stored equipment and supplies.

The modularized equipment stowage assembly (MESA) is located on quad 4 of the descent stage. It is deployed by the extravehicular astronaut when the LM is on the lunar surface. The MESA contains fresh PLSS batteries and LiOH cartridges, a TV camera, tripod, cable, tools for obtaining lunar geological samples, containers in which to store the samples, and other scientific devices. It contains a folding work table that also serves as a bracket on which the equipment transfer bag, used to transfer the PLSS batteries and LiOH cartridges to the cabin, is hung.

During Apollo 13, an explosion in the service module caused the command module to lose electrical power. This required using the environmental control system of the lunar module to remove carbon dioxide from the air. However, the LM contained only enough LiOH canisters to remove the CO$_2$ of two astronauts for two days, rather than three astronauts for four days. There were square LiOH canisters from CM, but they did not fit into the holes for the round LM LiOH canisters, and an adapter from materials on-hand was infamously made.

Did Apollo 13 have additional LiOH canisters outside in the MESA that could have been used to scrub the air instead of adapting the CM canisters? 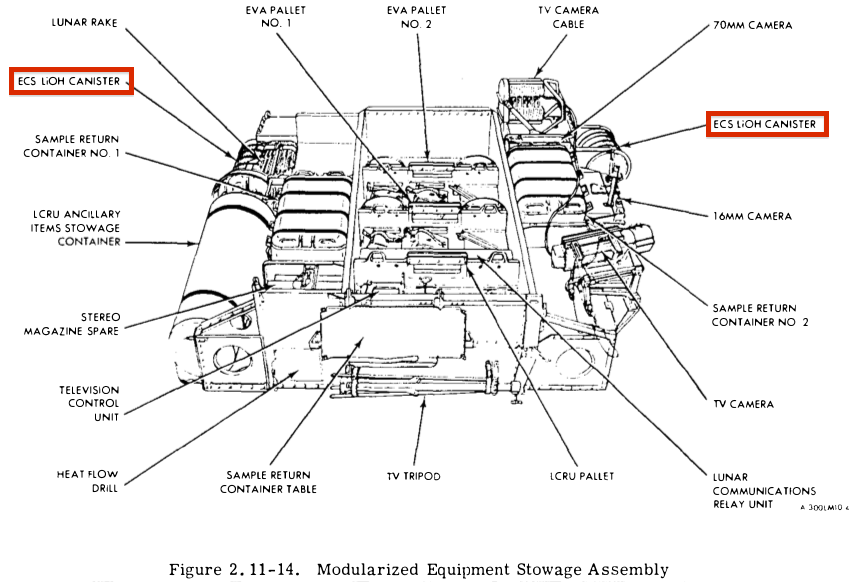 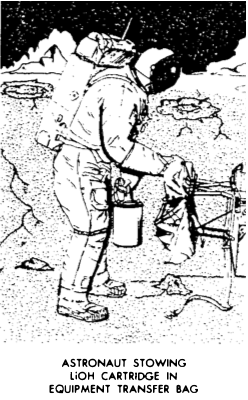 It probably woudn't have been too hard to rig something to use the cartridges while installed in the PLSS packs, but that leads to the other problem: duration. The PLSS cartridges were only rated to provide four astronaut-hours of absorption. They're probably good for at least three times that if astronaut is relaxing rather than bouncing around on the Moon, but even using both cartridges already in the PLSS packs and both cartridges on the MESA, that's only another 16 hours of carbon dioxide absorption.

According to the Cortright Report - Apollo 13 Review Board (5-33), when the the LM was jettisoned, it had 124 hours of Oxygen remaining. That is probably plenty to have done an EVA, but was unnecessary since they found a more conservative plan by adapting for the CM LiOH cannister.

On the same page of the report, it shows the LM had 4.5 hours of electrical power and 5.5 hours of water. I do not know what an EVA would have meant to power or water.

Not the answer you're looking for? Browse other questions tagged lunar-module apollo-13 enviromental-control-system or ask your own question.

30
Was the Apollo 13 CO2 problem a matter of capacity, or of rate?
18
What did the Apollo missions do with old LiOH canisters & the water they produced?
25
Were the Apollo CO₂ scrubber canister designs unified after Apollo 13?
16
Could the Apollo 13 crew have survived the CO2 issue using their spacesuits
5
Why did Apollo 13 need to scrub the air in the LM?
6
Why were these Apollo 13 items moved to the lunar module before jettison?