Do we sufficiently understand mechanics of Lagrange point stationkeeping for EML2 rendezvous and assembly?

I've been watching some recorded videos from the April 22 - 24, 2014 Humans2Mars conference (videos and live streams, when available, are on the National Institute of Aerospace channel on Livestream), in particular the Mike Raftery's (Boeing; Director, ISS Utilization and Exploration) presentation on a concept manned mission to Mars that was prepared by Boeing and Energia, starting roughly 15 minutes into this video. This slide caught my attention: 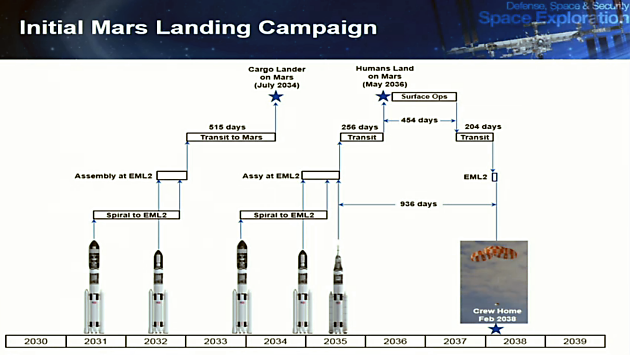 As you can see, two mission stages call for an orbital assembly at Earth-Moon L2 Lagrange point (EML2), but all the component parts are supposed to spiral to EML2 beforehand.

Now, we know (with some trial and error, failed rendezvous attempt of Gemini 4 with spent Titan II launch vehicle's upper stage, and then first successful rendezvous of Gemini 6 with Gemini 7, and later first docking of Gemini 8 with unmanned Agena Target Vehicle) that the dynamics of the in-orbit rendezvous and docking aren't exactly intuitive. You can't simply apply thrust in the velocity vector to catch up with your target vehicle, because that will add energy to your orbit and you'll end up increasing your altitude and with it distance to the target. And we also know that stationkeeping in Lagrange points isn't anything like orbiting around some massive body and halo or Lissajous orbits are the usual approach to maintaining one's position relative to L-points. So here's my question:

With Lagrange point stationkeeping requiring entirely different approach to maintaining attitude than when in orbits around parent bodies, do we sufficiently understand flight mechanics of EML2 rendezvous and assembly / docking? Have we already done anything like it, run extensive physics simulations, or will proof of concept missions be required before risking billions of dollars of hardware on a manned mission to Mars and do that first as soon as it's required, if it indeed called for EML2 assembly?

I'm interested in any considerations to EML2 docking that are different to orbital docking.

Some aspects of EML2 docking will be much easier. Some will be a bit harder. Some, we'll have to completely rethink.

On the plus side, the EML2 region is much closer to flat space than is low Earth orbit. Docking will be much more intuitive. That pesky orbital mechanics that makes docking in LEO non-intuitive is pretty much a non-issue. On the downside, this gravitational flatness means NASA won't be able to take advantage of orbital mechanics. New far-field rendezvous techniques will have to be invented.

For example, suppose the HTV, Dragon, or Cygnus is approaching the ISS on the r-bar, and suppose the astronauts or the mission control don't like what they're seeing. The simplest solution is tell the vehicle to play 'possum. This is a passive abort. Orbital mechanics naturally takes the vehicle down and in front of the ISS. The ISS has a 24 hour period (mandated by the ISS Visiting Vehicles IDD) before the ISS has to worry about that misbehaving vehicle colliding with the ISS. Passive abort won't work for EML2 rendezvous and docking. Active abort will always be needed, and that will impact the redundancy design of the active vehicle.

Update
Suppose you're in the same orbit as a target vehicle in low Earth orbit but are trailing it by a bit. You fire the thrusters to move towards the target. For a short time, low Earth orbit acts like flat space; you do move towards the target. Then, oops, orbital mechanics starts to rear its ugly head and you start rising above it and falling behind.

The gravity gradient is much smaller in the vicinity of EML2 than it is in low Earth orbit. This diminished gravity gradient is one of the ways in which the EML2 looks "flat". Another way in which it looks flat is from the perspective of gravitational acceleration. It's small. Finally, from the perspective of an Earth-Moon rotating frame, the EML2 point is flat. The region about it is close to flat.

What this means is that a spacecraft has a long time between performing an impulsive burn and seeing gravity perturb the flat space response to that impulsive burn. Near-field rendezvous is "simpler", more intuitive.

The downside is that rendezvous is "simpler". NASA's astronauts were indeed confused by those non-intuitive behaviors during the first Gemini missions, but that was fifty years ago. People have learned how to deal with those behaviors since then. In fact, they've learned how to take advantage of them. There are lots of ways to take advantage of a gravity field. Phasing orbits rather than Lambert-based approaches. Passive aborts rather than active ones. Twice Orbital Rate V-bar Approach (TORVA). We'll have to make far-field rendezvous much slower and we'll probably have to burn more fuel to do rendezvous in the EML2 region.

10
If Space Adventures actually does a Soyuz around the Moon, will this be the first real Earth Orbit Rendezvous launch?
2
What do the green lines represent in this Lagrange Point animation?
22
Why was orbital rendezvous considered so controversial?
6
Did the astronauts of Gemini 4 have any realistic rendezvous simulator training of orbital mechanic effects?
7
How did mission control work for the concurrent Gemini 6A and 7 missions?
4
Question about orbital mechanics and trajectories for a space infrastructure project/climate adaption idea
4
Can mascons have Lagrange-like points? In principle? At the Moon?
2
Code to generate Sun-Earth L2 halo orbits for given epoch?
18
Is there something inherently more difficult about servicing satellites in the 2nd Sun-Earth Lagrangian point?