I was contemplating on how a de-orbit may be abandoned post completion of the orbit burn, say, from LEO. A situation in which this might be necessary would be detecting a breach in the heat shield after the burn or any other emergency situation.

Are there standard procedures to abort de-orbit? Or is the fate of the crew sealed once the burn was complete?

For the shuttle, technically the deorbit burn could be aborted, but the window to do so was extremely limited.

Once the deorbit burn was started, one of the key parameters monitored by the crew was the current height of perigee "HP" displayed on the maneuver display. This was a number in nautical miles and would have started out roughly equivalent to the height of apogee "HA".

The deorbit burn was not intended to reduce the Orbiter's velocity to a small value, but rather to change its orbital parameters, so that its orbit intersected the sensible atmosphere. Specifically, it significantly lowered the orbital perigee. 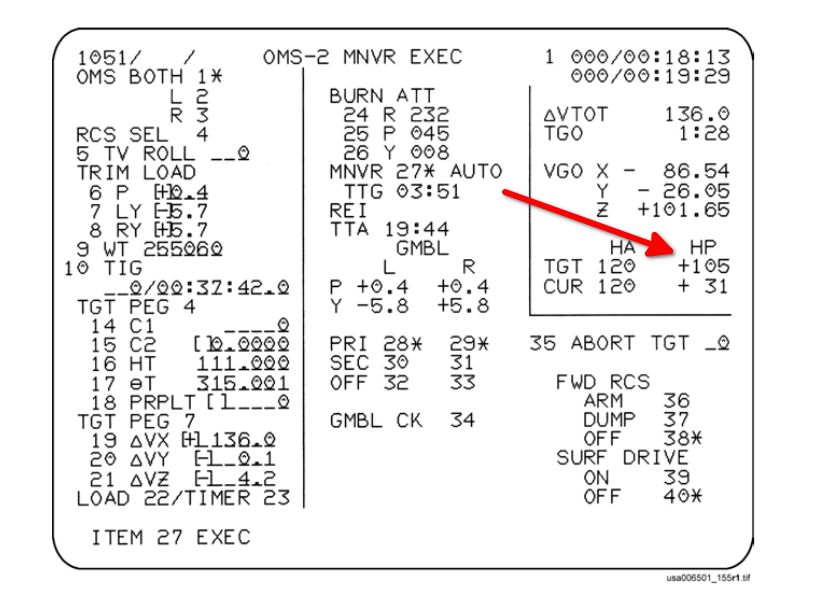 As the burn progressed the HP got smaller and smaller. Before the burn, the ground would have read up to the crew a key number, "safe HP", which the crew would enter into the Deorbit Burn pads.

As long as the "current HP" was greater than "safe HP" the burn could be aborted. This can be seen in the Deorbit Burn Flight Rules card in the Entry Checklist. POST TIG means after ignition, the few problems serious enough to stop the burn are listed in the right hand column. 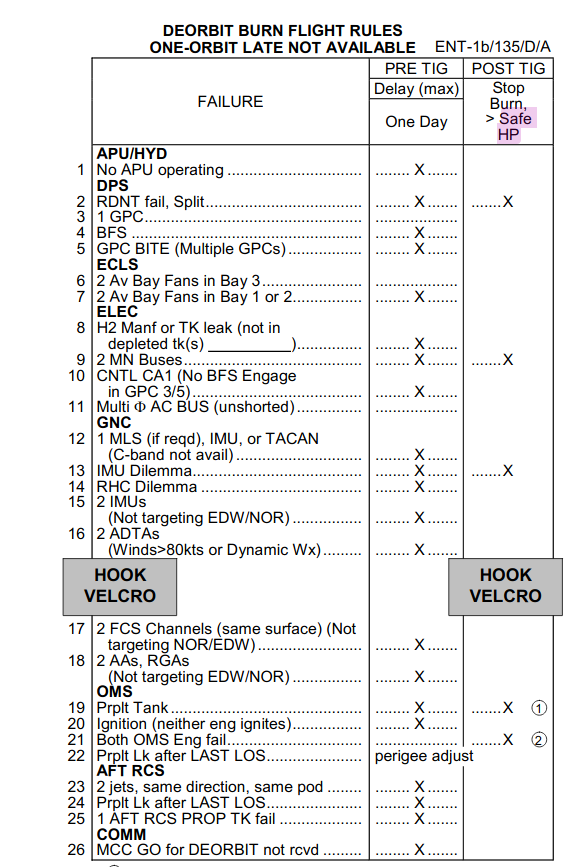 Below "safe HP" the vehicle is committed to entry. If the deorbit burn fails for some reason below safe HP, it must be continued by some of the many redundant means available: single Orbital Maneuvering System (OMS) engine completion, crossfeed, Reaction Control System (RCS) completion.

If while perigee is still above SAFE HP a failure occurs that severely impacts OMS capability, the crew will stop the burn. SAFE HP guarantees at least 24 hours of orbit time, which MCC can use to properly retarget the deorbit burn and assess the impacts of the failure.

On the other hand, if the failure occurs below SAFE HP, the crew must do what they can to complete the deorbit burn, which includes using the aft and forward RCS and possibly a recovery prebank.

Safe HP was generally around 80 nm if memory serves.

It's less efficient to circularize when you're not at periapsis but it can be done and in the case of aborting a de-orbit the inefficiency isn't all that great anyway since you're near periapsis. The limiting factor is that fuel is a very expensive commodity, rockets don't carry much extra. Once your periapsis is in the atmosphere you won't have the fuel to raise it and then lower it again.

Not the answer you're looking for? Browse other questions tagged orbital-mechanics space-shuttle low-earth-orbit abort or ask your own question.

31
How could a 90 m/s delta-v be enough to commit the space shuttle to landing?
10
What, if any, abort options would the crew of Columbia had on reentry during STS-107, assuming they became aware of the damage during that phase?
8
What is making the glow from this image of STS-135 going home, de-orbit burn or re-entry?

15
Minimum Orbit Altitude
8
What is the problem with aborting a Space Shuttle launch?
10
How was the Space Shuttles rollover maneuver achieved?
4
How can I design a finite thrust maneuver to approximate an impulse thrust maneuver?
5
Maneuver to the optimal point of a given orbit
4
Why would a space shuttle have flown a normal first-stage and early-second-stage ascent trajectory during an RTLS abort?
3
How does one calculate the argument of periapsis of an orbit after an arbitrary maneuver?
6
What were the space shuttle’s emergency procedures for an SRB or ET separation failure?