Did any part of the Apollo 13 LiOH adapter return to Earth?

During Apollo missions, carbon dioxide expelled by the astronauts' breath was removed by lithium hydroxide cartridges in command module and lunar module. Apollo 13 infamously had a problem with adapting the CM cartridges for the LM, and engineers back in Houston improvised an adapter from materials available on the spacecraft:

Did either the adapter -- or parts of it -- return back to Earth? If so, are they on display somewhere? Leftover pieces of the above items which were not used for the actual adapter don't count.

This is the last day of a series honoring the 50th anniversary of Apollo 13, "NASA's finest hour". The mission splashed down safely on April 17, 1970. 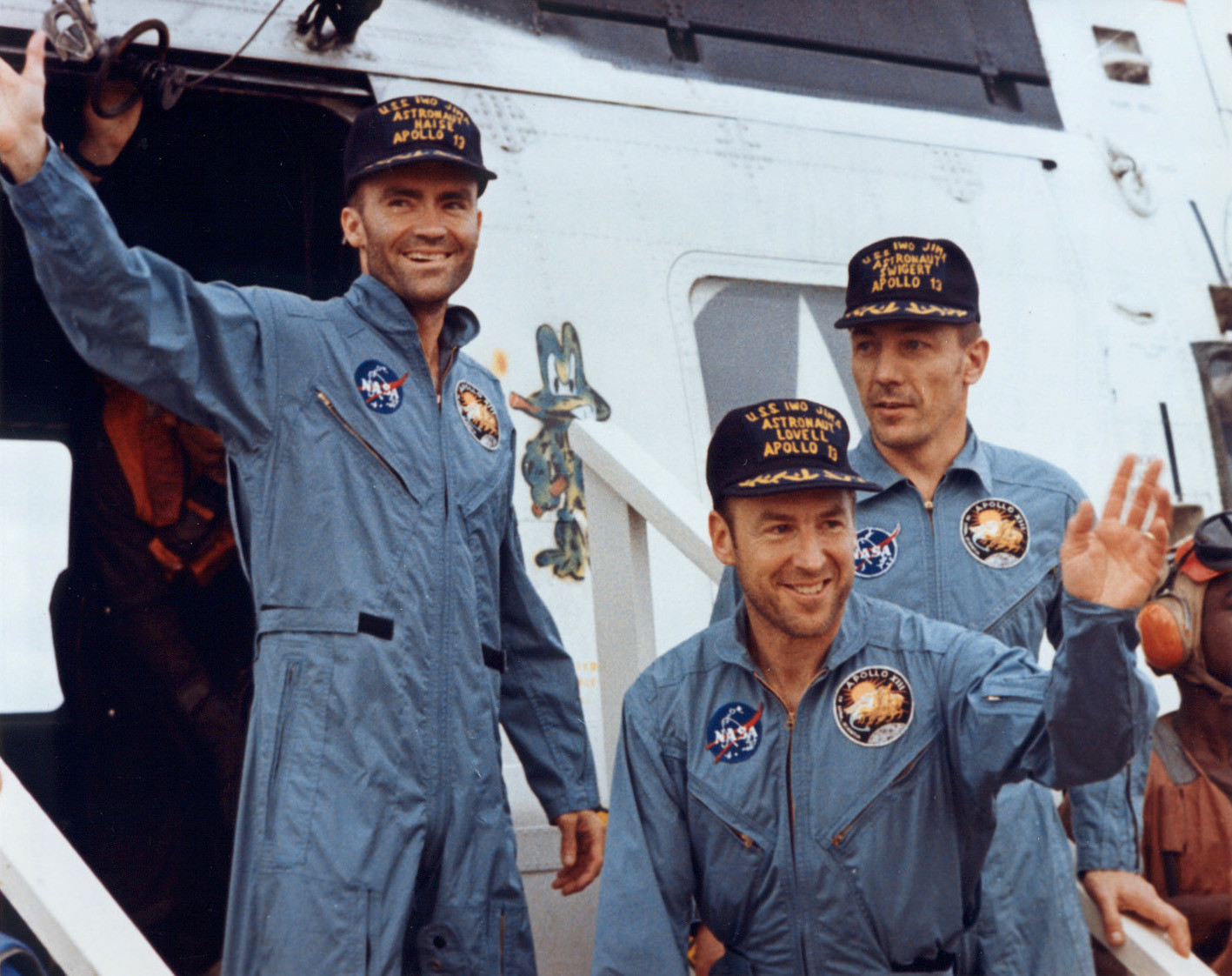 Probably not, I think.

121:57:59 Brand: Okay, and finally, four LiOH cans, the ones used in the LM, and those can go in the jettison bag in the LM. Okay, a couple of notes. After loading the ISA, recommend secure it to the right hand restraint system. [Long pause.]

I believe the "four LiOH cans, the ones used in the LM" are the hardware from the scrubbers; each incorporated a single CM LiOH canister, and then a second one was taped onto it later in the flight. It can't refer to the original LM LiOH canisters, as there were only two of those.

It doesn't say specifically what happened to the rest of the hardware, but given they were taped together into a single unit, it would make sense that the whole thing was left in the LM. There is a mention of various bits and pieces stowed in the CM for balance purposes, but none of it sounds like the adapter.

According to this NASA page a replica was build in 2012. 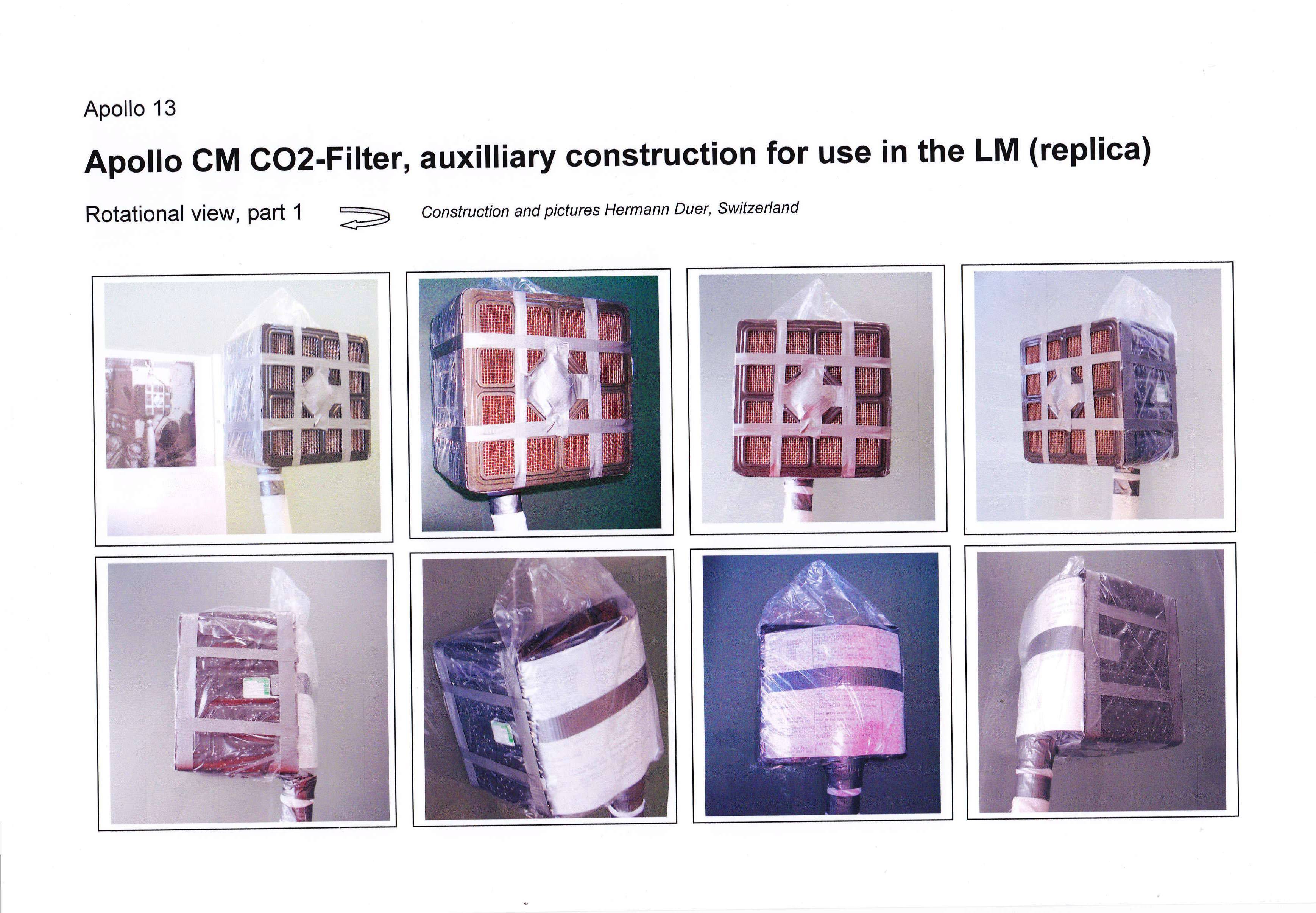 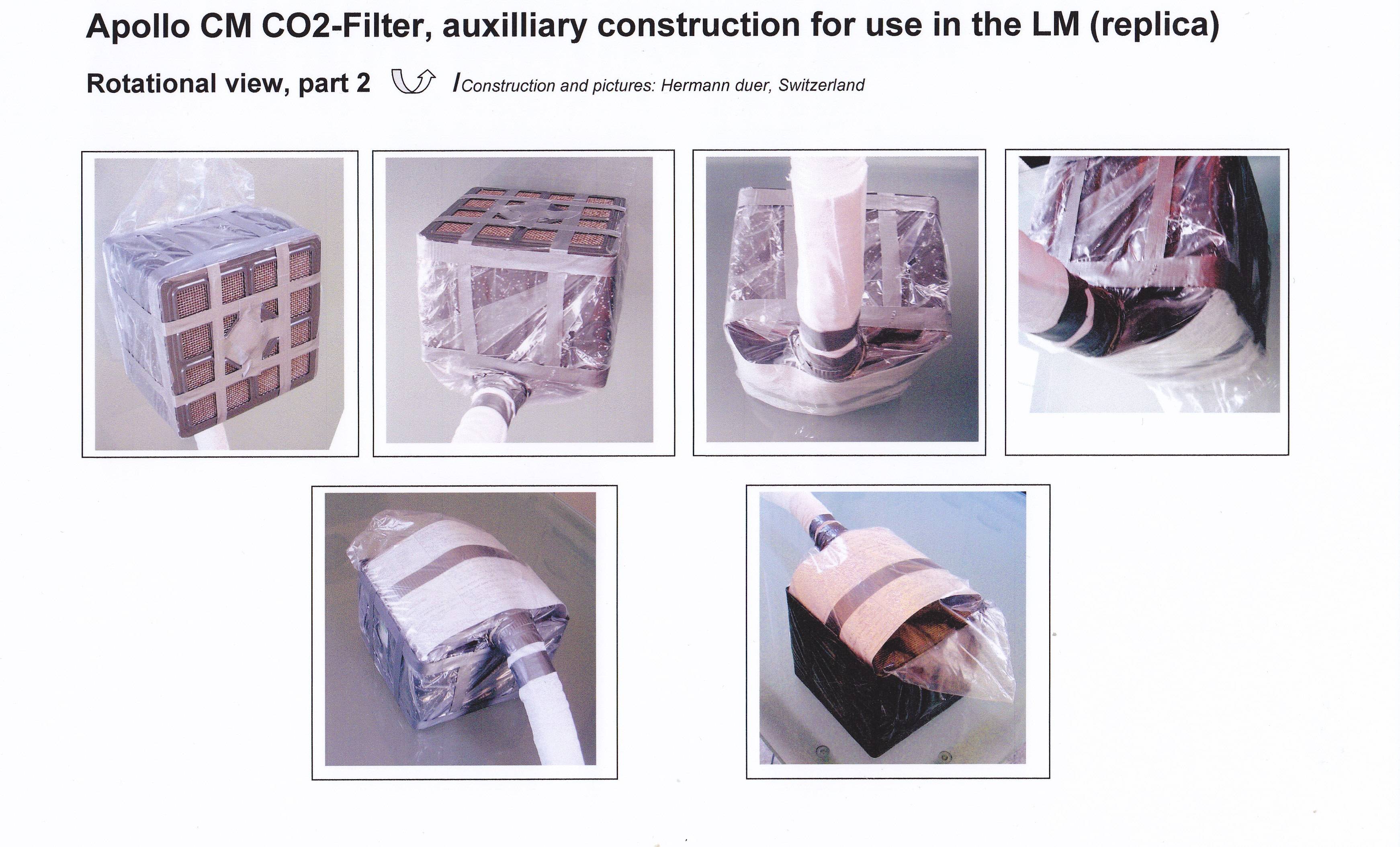 In 2012, Journal Contributor Hermann Dür decided to make a replica of the adapter built by the Apollo 13 crew, using a Command Module Lithium Canister he has in his personal collection, together with other suitable materials. He used the images above for guidance, but primarily followed the instruction given to the crew by CapCom Joe Kerwin. Before we present the relevant air-to-ground, the two following images show the replica viewed from all sides.

A return to Earth of the original adapters is not mentioned there. Two of them were built and they stacked two cartridges to use four cartridges altogether. If an adapter did return within the CM, it would have been noted on this page.

Not the answer you're looking for? Browse other questions tagged apollo-13 equipment enviromental-control-system museum-exhibits or ask your own question.

5
Why did Apollo 13 need to scrub the air in the LM?
1
Does the Smithsonian get priority over NASA artifacts?

31
Was the Apollo 13 CO2 problem a matter of capacity, or of rate?
11
Why was 65 volts used for ground support equipment?
24
Did Apollo 13 “barbecue roll” under the propulsion of the lunar module?
7
Were more lunar module LiOH cartridges just a spacewalk away?
13
Why did Apollo 13 need to ration water?
6
Why were these Apollo 13 items moved to the lunar module before jettison?
12
How were the Apollo 13 CM and LM able to undock without the engines of the SM?
38
Did Apollo 13 produce any scientific results?
4
Why were the openings of the LiOH canisters in Apollo different shapes in the first place?
2
Did the LiOH cartridges for the Space Shuttle cabin and spacesuit share the same shape?