What kept crosswinds from pushing Apollo rockets into their own gantry?

Watching this unnamed Saturn V launch (Apollo 13?), I see the gantries pull away, and the rocket takes 13 seconds to clear the tower.

That seems like enough time for crosswinds to act on the rocket, and push it the fairly small distance into the gantries or tower.

I'm aware that the rocket makes a 1.25 degree adjustment away from the tower, but it does not seem like that would be enough; in the video, the rocket still comes quite close to the tower. Further, I understand that maneuver is open-loop, a preprogrammed maneuver; there's no feedback to increase the angle to respond to higher-than-expected wind force.

What prevented crosswinds from pushing the rocket toward the tower? Is it a matter that they didn't launch with unfavorable winds? Is the considerable mass of the Saturn V simply too much for the wind to move appreciably?

How does this work for space launches in general? 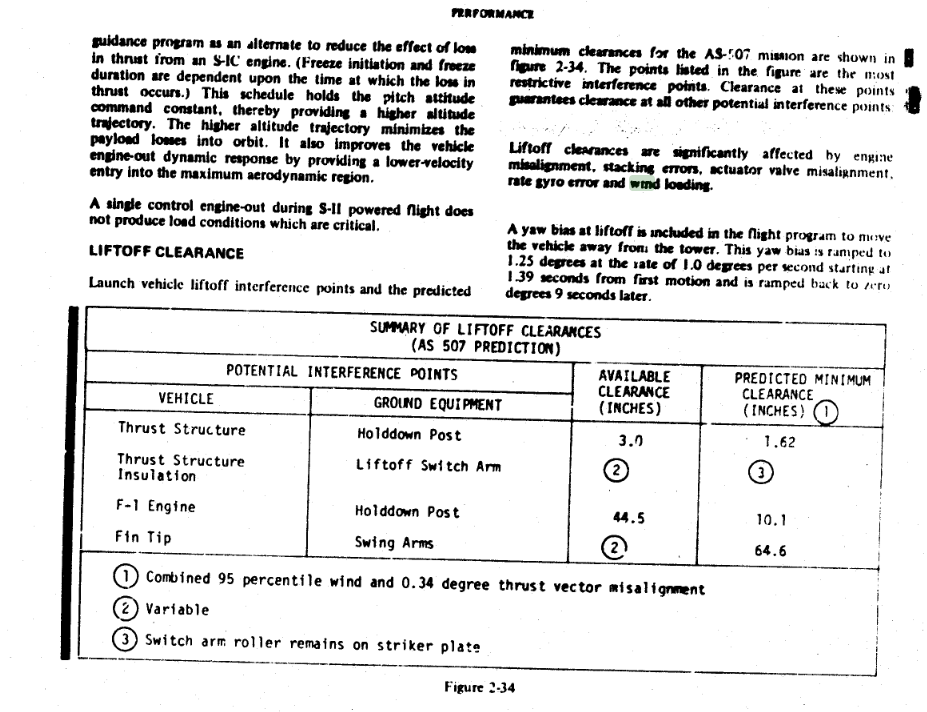 A word on the 95th percentile - It would be impractical to design the system for every wind ever encountered at the launch site. A statistical line must be drawn to set a barrier between launch probability and cost of the system. Apparently Apollo chose 95%. Most Shuttle systems were designed to a three-sigma (99.7%) probability.

How does this work for space launches in general?

For shuttle the winds were extensively measured prior to launch and simulations were run using the winds of the day to make sure it was OK. In fact the steering and throttle commands were calculated on the day of launch based on the winds.

Shuttle's LCC on ground winds was

For launch, the allowable peak wind speed observed at the 60-foot level of the fixed service structure depends on the wind direction and ranges from 19 to 34 knots.

tl;dr You choose the wind conditions to design your system for based on a statistical study of the wind conditions at the launch site, your tolerance for scrubbing based on winds, and your budget. Then on the day of launch you measure the winds of the day to ensure that the design criteria are not exceeded.

This is a fun example to try to estimate from first principles. I'm going to ignore the 1.25 degree tilt. I'm just going to estimate how far the center of mass could get blown by the wind. Most of the mass and surface area is in the first two stages, so let's say the thing is effectively a cylinder with a height of $L=70$ m (not the full height of the vessel). The coefficient of drag for a cylinder depends somewhat on Reynolds number, but is probably about $c=0.5$ here. The radius of the lower stages is $r=5$ m. It takes $t=13$ s to clear the tower. The mass is $m=3\times10^6$ kg. Let $\rho$ be the density of air. A comment by Uwe says the highest actual wind speed at launch was about $v=10$ m/s, and he points out that they would probably orient things so that the prevailing wind was away from the tower, but let's say that we get a gust in the wrong direction that lasts for the full time $t$ and has this strength.

In this model, the horizontal motion is

Organic Marble's answer shows that the clearance between the fins and the swing arms is bigger than 1.6 m; this figure is the "predicted minimum clearance," so the actual clearance would be bigger. (The much tighter clearances in the same document are for the holddown posts, but the vessel clears those very quickly.) So it seems like this deflection by the wind is on the right order of magnitude to cause a disaster, but presumably these people, who were aeronautical engineers, calculated this really well and were able to set the weather criteria for an appropriate level of risk.

Not the answer you're looking for? Browse other questions tagged launchpad apollo-13 or ask your own question.

4
Why doesn't the USA use structurally stronger rockets for the more important launches?
6
Saturn launch precautions for clearing tower?

11
Puzzler: Precisely what maximum distance from the Earth did the Apollo 13 astronauts achieve?
4
Purpose of Initial yaw Maneuver?