How close would the Tesla Roadster with Starman have to get to Earth in order to become attracted and fall on Earth?

In 2091 the Tesla Roadster is said to maybe get closer to Earth than the Moon is. At Starman's current speed, would its location in 2091 be sufficient for the Earth to re-attract the Starman to let it reenter the Earth's atmosphere? How close must the Tesla be in order to get attracted by Earth strong enough to fall on Earth? And as for falling onto other planets: is the critical distance determined by the distance according to the Earth's and their masses times the Earth's? Such as: Mars has about 0.11 the Earth's mass so the critical distance for Mars would be about 0.11 that of Earth for the Tesla to get attracted by Mars?

According to Keplerian orbital mechanics, it will never come so close to earth "to get attracted by Earth strong enough to fall on Earth" (unless it will hit the earth directly).

Everything entering Earth's Hill Sphere from "outside" is on a hyperbolic orbit, so it is going to pass earth no matter how close it passes Earth (here also: except a "direct hit").

EXCEPT: You take into account Earth's atmosphere: Earths atmosphere can slow down an object.

This is not directly connected to Earth's mass but to atmosphere density. So for earth, the minimum altitude is about 80 km (depending on many factors). For mars it will be much lower due to less atmospheric density. For the moon, you can theoretically pass a millimeter above surface without touching it (assuming it's a perfect sphere).

Just one additional clarification: of course earths gravity affects the objects path, and of course more mass means the object is affected more. An object that collides with earth would not do so without first being affected by the gravity of earth or other celestial bodies. BUT the point is: objects from "outside" move in hyperbolic orbits. As long as the periapsis (closest point) does not hit earth nor it passes the dense part of the atmosphere, it will always pass.

How close would the Tesla Roadster with Starman have to get to Earth in order to become attracted and fall on Earth?

tl;dr: If Roadster approached the Earth with $v_{inf}$ of 3000 m/s and an impact parameter of about 24,000 km from Earth's center (about 3.8 Earth radii), Earth's gravity would deflect it just enough for a grazing collision.

From Wikipedia's Hyperbolic Trajectory; Impact parameter and the distance of closest approach

See also What's the planetary exploration word for “impact parameter” (distance of closest approach if gravity were “turned off”)?

With Earths standard gravitational parameter $GM$ of 3.986E+14 m^3/s^2 and an approach velocity of 3000 m/s we can find out what impact parameter $b$ would result in a distance of closest approach $r_p$ equal to Earth's radius.

On earth when things fall into things they start from rest, or from a low speed.

"Falling into" isn't exactly the right way to think about moving bodies in the solar system because they are all generally going fast with respect to each other.

When Roadster was launched from Earth Elon Musk mis-tweeted that it had achieved 12 km^2/sec^2 excess C3 ("energy") relative to Earth after launch. He got the number wrong but the point is that once Roadster had this positive energy relative to Earth it could never "fall back" to Earth.

See Starman/Roadster in a=1.795 AU orbit, now what's the method to this madness? and this answer.

So Earth orbits the Sun at about 30 km/sec and when Roadster passes 1 AU from the Sun it will be going 33 km/sec (also around the Sun) in roughly the same direction, so if it was moving towards Earth it would slam into it at about 3 km/sec.

It's true that if it were going to miss the Earth by a diameter or two, then Earth's gravity could "pull it in" somewhat so that they still hit. We would probably call that a deflection rather than a "falling in".

Now the deflection could happen just before impact, or hundreds or thousands of years earlier! For more on that see 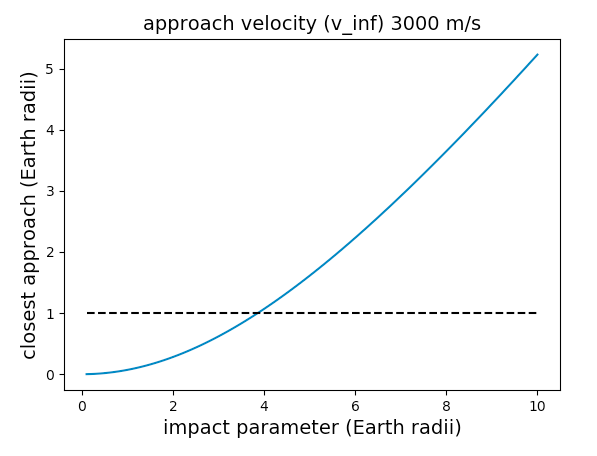 First of all, the 2091 date is based off an old set of orbital predictions, the next time it will be close to Earth is actually 2047. For more information, see the article I wrote for Ars Technica.

For it to orbit Earth, you would have to have a particularly close flyby of the Moon, which changed the orbital energy just right to orbit the Earth in a pretty unstable orbit. To hit Earth, it would have to be within about 100 km of Earth, close enough where the atmosphere would start to slow it down, and really more like 80 km.

I don't know exactly how close it would have to pass by the Moon, but I'm guessing really close if you want to do it in one go, or somewhat less close but more times.

22
Starman/Roadster in a=1.795 AU orbit, now what's the method to this madness?
15
Nuances of the terms (mean / osculating / Keplerian / orbital) elements
4
What's the planetary exploration word for “impact parameter” (distance of closest approach if gravity were “turned off”)?
10
Do all dangerous asteroids first pass through keyholes?
3
How and/or why did Elon Musk mistweet Roadster's C3 so badly?
1
Gravitational keyhole for spacecraft flyby?

6
Could daily variations of weight on Earth really be 0.003%?
6
Can someone explain to me what will cause Starman’s orbit to change to match the orbit that has been posted?
10
How close will the Tesla Roadster with Starman actually get to Mars?
3
Will the Tesla Roadster/Falcon 9H 2nd stage ever be a navigation hazard to cis-lunar space?
6
How long will we be getting data (pictures?) from Starman and his Tesla?
33
Why does this plot show Starman's speed relative to the Sun fluctuating so often?
4
What is the closest distance SpaceX's Tesla Roadster (Starman) will ever be to Mars?
3
How and/or why did Elon Musk mistweet Roadster's C3 so badly?
13
At what minimum distance does the Earth appear star-like to the naked eye?