Could a carbon arc lamp help to propel a spacecraft through interstellar space?

I would like to know, on a theoretical basis, if the electron flow entering into the anode of a carbon arc lamp would impart enough kinetic energy to the anode, and thus to the spacecraft, to help propel it through interstellar space.

The electron flow would be move in the same direction of the spacecraft as illustrated by the photo below: 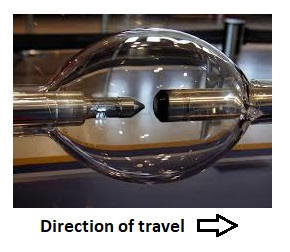 I understand that a single carbon arc lamp, or even a large array of these lamps, would not produce enough force to accelerate a spacecraft up to the velocity needed for interstellar travel, yet I think that these lamps could provide a continuous force over a long period of time that will reduce the need for carrying a large supply of chemical propellant for the spacecraft's primary propulsion system.

As far as what would be the power source for these lamps, I think the most ideal power source would be an onboard nuclear reactor.

Could a carbon arc lamp help to propel a spacecraft through interstellar space?

Yes! But perhaps not precisely in the manner you envisioned.

First, as has been discussed in the comments, the electrons emitted by the cathode can't be re-absorbed by the anode, or else no net momentum will be imparted to the craft.

If the electrons are instead emitted out the back of the craft, a 'la an electron gun, a small thrust will indeed be produced. Either because of the light weight of the electron (mv momentum vs mv^2 energy), losses due to synchrotron radiation, or some other physical effect, this force will almost certainly be negligible. A useful thruster will probably look much more like a particle accelerator.

If you were to measure this force for long enough, you may be surprised to find the needle drift from 'infinitesimal' all to way to 'decisively zero'. For, having gradually emitted negative charge, the craft will start to charge positively, and eventually will attract all the electrons back!

However, an arc lamp doesn't just involve electrons. Rather, the electrons slam into gas atoms or the carbon electrodes, producing a superheated soup of positively charged atoms. If this plasma is ejected appropriately, a significant thrust can be obtained without charging the craft.

Now we find that our arc lamp somewhat resembles a number of real-life propulsion systems: if using a gas source, it's probably most like an arcjet; if the carbon electrodes are used as the fuel, it could be a type of solid-fuel PPT.

Pure supposition on my part: the photon pressure produced by the mere light itself could also be harnessed - arclamps are very bright! A solar sail could perhaps be usefully driven by an inappropriately large lamp.

1
Would an incandescent light bulb be more efficient than a laser for photon propulsion?

13
Could radiated heat propel space-craft in outer space?
21
Can ion thrusters be scaled up?
1
Could a spacecraft be propelled by a 180 degree deflection of two charged particle beams?
28
Would a grinding machine be a simple and workable propulsion system for an interplanetary spacecraft?
1
Could a CubeSat be propelled by this low-tech electromagnetic propulsion system?
5
Could the helical engine work?
2
Using recent technology, how much electrical power could a nuclear reactor launchable by a low-level heavy-lift vehicle be developed to produce?
3
Could the kinetic energy in the Sun's solar wind power an ion propulsion system for an interplanetary spacecraft?