Does NASA have spacecraft that are specifically made for orbiting around the Sun?

Does NASA have projects with spacecraft which are specifically made for orbiting somewhere around the Sun? If yes, what can they be used for?

I suspect you mean objects that haven't left the solar system (and what is the boundary?) and that aren't orbiting another planet.

Every object en route to another planet that has left the Earth's sphere of influence and has not yet entered the target planet's sphere of influence is orbiting the Sun. Whether the Pioneer 10, Pioneer 11, Voyager 1, and Voyager 2 missions count is a matter of debate. Dawn is en route to Ceres. Rosetta is en route to 67P/Churyumov–Gerasimenko; the encounter will be later this month. New Horizons, while on an escape trajectory, hasn't reached Pluto's orbit yet. India's Mars Orbiter Mission and the US's MAVEN satellite are both en route to Mars.

There are also a number of vehicles in pseudo orbits about the linear Sun-Earth Lagrange points (SEL1 and SEL2). These Lagrange point orbits are becoming the go-to place to put orbiting observatories.

In addition to these, a number of satellites have intentionally been placed into heliocentric orbits with the intent to study either interplanetary space or the Sun itself. These include

STEREO A and B are the only two that are currently active.

In addition to the definition given by David H, I would add Ulysses, which is specifically observing the sun from out of the plane of the ecliptic and might mean what the questioner is asking for.

Ulysses made two passes around the sun, one over each pole, and its mission is officially over after the second pass. In order to get out of the plane of the ecliptic, it did a gravity assist at Jupiter, so it could come back towards the sun, over the top/bottom. Pretty amazing orbital mechanics management to do that.

Wikipedia has a nice graphic of how that orbit was managed: 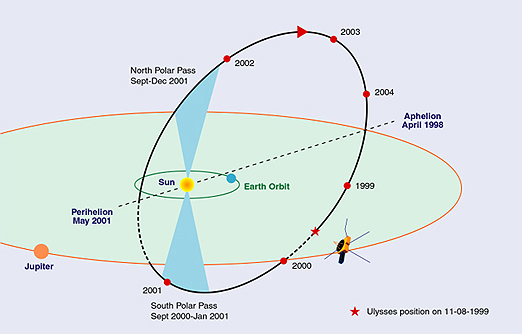 Not the answer you're looking for? Browse other questions tagged orbit spacecraft the-sun or ask your own question.

11
Have any spacecraft been launched or proposed to make a survivable close encounter with the Sun?
4
What are the problems with using the sun for Oberth maneuvers?
9
How was this image of the sun taken and what does it show?
18
Why does NASA's Juno spacecraft only have a one year primary mission?
1
What thermal effect does the Sun have on spacecraft that are roughly the same distance from the sun as the earth is?
3
Why does a spacecraft have angular velocity relative to Earth?
3
Name for point in a satellite's orbit around a planet when the satellite is furthest from the sun
2
How low does OSIRIS REx's record-setting orbiting around Bennu go?
7
How could a satellite follow earth around the sun while staying outside of earth's orbit?
1
Does the Earth's orbiting the Sun influence spacecraft in Earth's orbit?