What's is this very CGI looking clip in this NASA video of the Alpha Magnetic Spectrometer installation?

This is the NASA video AMS Time Lapse Installation a time-lapse of the Alpha Magnetic Spectrometer (AMS) installation at the International Space Station. At about 01:30 in the video, there is about 1 second where it jumps to a some computer simulation.

What is being shown exactly? Is it CGI or CAD or something else? 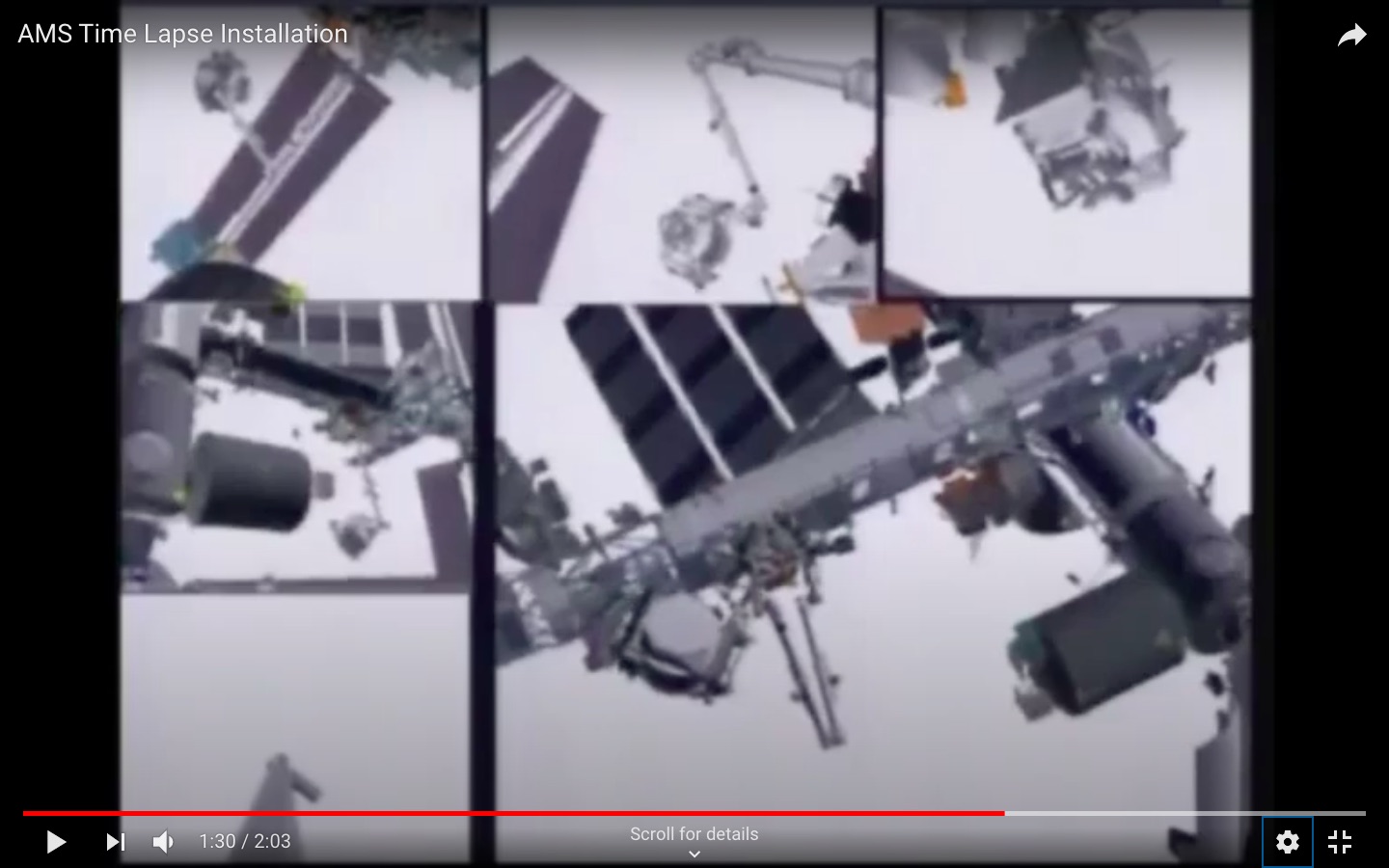 Here is a screenshot of a MAGIK video used when we were working on the Docked Late Inspection failure response on STS-131: 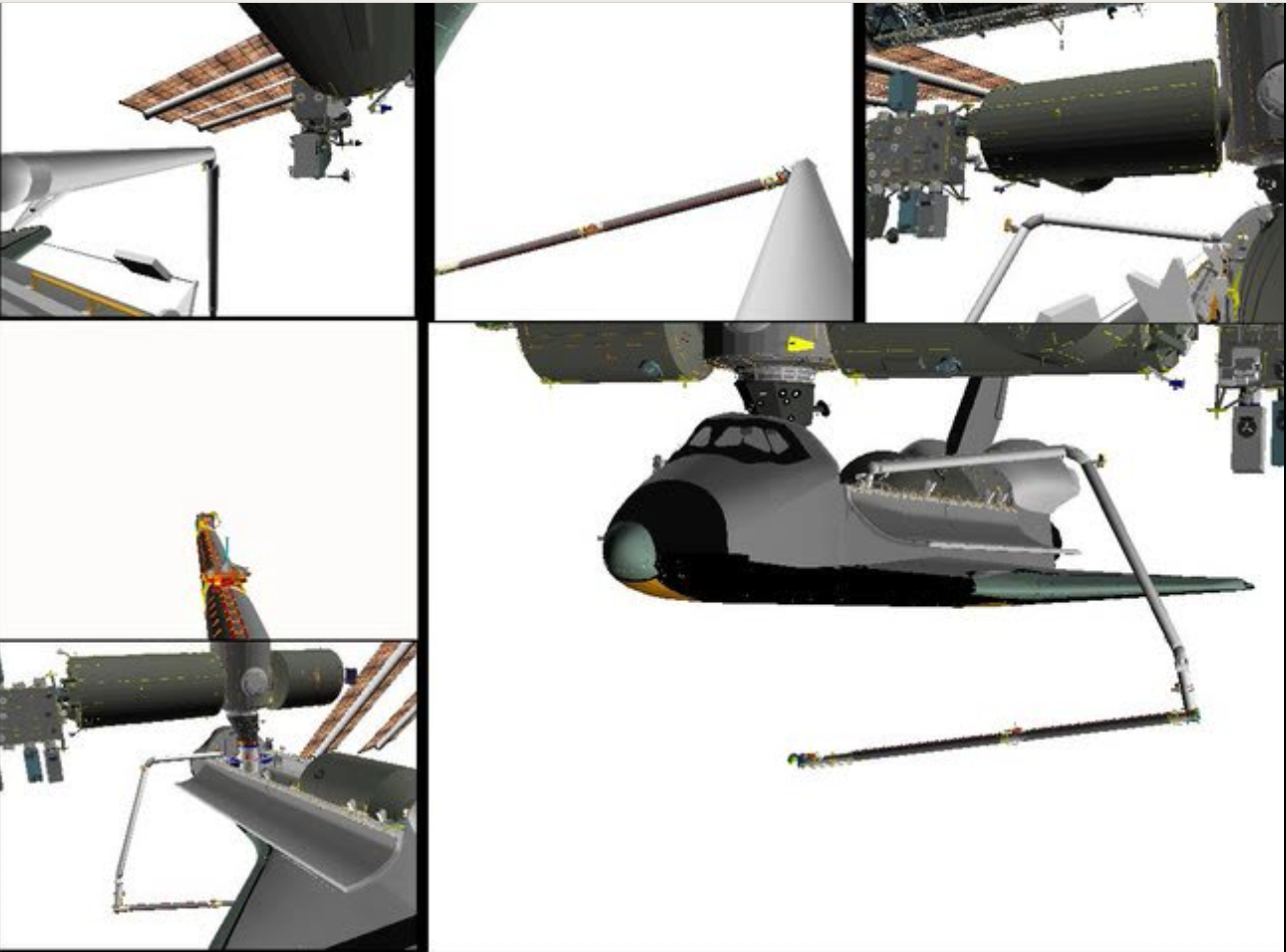 The small squares are views from different cameras and the large view in the lower right is a "God's-eye view".

Basically the tool is used when planning an operation to figure out the joint angles that will be used by the manipulator arms to achieve the mission goals while obeying all the restrictions such as joint angle limits, clearance-to-structure rules, availability of camera views, etc.

The tool and its use are described in ISS ROBOTICS ANALYSIS AND OPERATIONS although annoyingly, most of the pictures do not render in this paper. I had to scroll down to about page 20 to find one that worked. Also this paper is from 2002 and the graphics kept getting better, as you can see when I worked there in 2010 they were quite a bit better.

The NASA/Boeing Robotics Analysis Team’s purpose is to provide NASA with efficient and thorough analysis of robotic operations on the ISS, such as assembly operations, EVA/SSRMS tasks, operations viewing, Space Vision Systems (SVS) operations, and SSRMS capture and berthing. The team is called the MAGIK Team due to their main robotic kinematic analysis tool named MAGIK which stands for ...The team uses this tool almost exclusively to perform their main analysis task of investigating kinematic feasibility of the ISS RMS assembly operations.

A much older but more detailed description of MAGIK is here.

MAGIK can be used to analyze the kinematics of any space station robotic operational scenario. It serves as a proof- of-concept tool for planned robotic operations. Starting from engineering drawings, models can be built to the desired level of fidelity, manipulators can be accurately modeled kinematically, and man-in-the-loop simulations can be running within hours. The ability of engineers using MAGIK to answer the "what if or "is it possible to" questions - quickly and accurately - continues to amaze even those who are familiar with its capabilities.The following sections give examples of space station analyses that have been accomplished using MAGIK in the areas of robotic assembly and maintenance, simulated viewing, astronaut training facility test setup, dexterous manipulator tasks, control algorithm development and testing, collision detection, evolution concept evaluation, servicing facility functionality, and in-space assembly of large space vehicles.

Not the answer you're looking for? Browse other questions tagged iss identify-this-object simulation video alpha-magnetic-spectrometer or ask your own question.

4
Is the ISS going to yaw and assume the XPOP attitude for Nauka docking?

48
What caused this bright light from the ground at night seen from the ISS?
7
What are these antenna-like structures seen in Oleg Artemyev twitter video?
5
Was there once a semi-serious space-art project planning to use solar reflectors to put a spot of light on the crescent Moon?
9
Are mechanical pencils used on the ISS?
11
Were the Apollo broadcasts recorded locally on the LM?
36
Why is my Earth simulation slower than the reality?
8
Why does the Alpha Magnetic Spectrometer (AMS) on the ISS use carbon dioxide for coolant?
3
What are the "25 bespoke tools (that) had to be developed" to install a new coolant system for the Alpha Magnetic Spectrometer (AMS)?
11
What's the small white gadget with two black buttons in this video of the International Space Station?