Who are the actual lead designers of manned spacecraft?

By "lead designer" I mean a person who oversaw the preliminary design phase for a manned spacecraft, being intimately involved in and ultimately responsible for crucial design choices and compromises. It is a shame that we know the names of space entrepreneurs and CEOs making financial decisions but often fail to honor the memory of the engineers who did the actual work.

Please note that I intend to make full use of recent changes in the "Community Wiki" rules. In case you haven't noted, you can edit your answers an unlimited number of times, all the votes accruing to your reputation.

Please also note that unless there's a verifiable tie, I will not upvote later answers copying names from other posts.

For your convenience, here is the list of manned spacecraft (different generations of the same spacecraft count, but I'm not listing all the Soyuz versions here, for instance):

This answer is about OKB-1 (later known as TsKBEM, then NPO Energia, today known as RSC Energia) spacecrafts. I plan to edit, to make it more exact and detailed.

The chief conceptual designer was Konstantin Feoktistov. The administrative chain of all the people "responsible for the design" looked like that:

One needs to understand, that the initial designs were the ones of the soviet lunar programs. Including such complexes as Soyuz A-B-V, for example. And N1-L3, where L3 = 7K-LOK + LK. 7K-LOK is a kind of Soyuz with the familiar Landing and Orbital modules, but a larger Service Module. 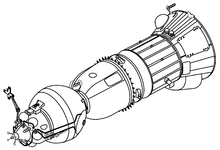 The family included such spacecrafts as Soyuz 7K-L1 which were sent to fly around the moon under the names of Zond-5,6,7,8.

The only structural part all those Soyuz variants have in common is, probably, the landing module. The design works, including the search for the optimal shape, landing schemes, of the Landing Module were headed by Vladimir Timchenko

After the concept of the landing module was ready, there was a joint team of Departments 9 and 11 headed by Feoktistov to work out the designs of 7K (i.e. Soyuz).

Good source is the following writeup: Memories of the Soyuz lander module creation (in Russian).

Salyut re-used Almaz hull design, fitted with Soyuz guidance and control systems. Soyuz-T is a member of Soyuz family adapted to be a ferry serving the station.

The same RSC Energia '46-49 gives the list of conceptual designers of Mir station, it doesn't go into finer details.

The role of Konstantin Feoktistov

One could note that the only name really belonging to all of the above lists is Konstantin Feoktistov. He has participated in the Sputnik designs. And retired from RSC Energia in 1990, 4 years after Mir launch. In different roles he was creating them all. I am surprised his memoir book is not present on Amazon in English translation.

The following is the relevant administrative chain of Buran proper, not the whole Energia-Buran complex. The whole complex as well as Energia rocket herself were designed mostly in NPO Energia.

Some sources claim, that the essential part of the conceptual design works were done by Lozino-Lozinsky himself. However strange that may sound.

The information is rather sparse, though, so probably the real key people are somewhere down the administrative chain.

There are lists of all the people responsible for Buran airframe though, such as at the bottom of this page. So the right person is definitely there.

This answer is about spacecrafts designed in OKB-52, later known as TsKBM, then as NPO Mashinostroeniya.

The design of TKS should have been conducted by someone in Fili branch of TsKBM (later known as KB Salyut, today part of Khrunichev).

33
How do manned spacecraft achieve an airtight connection while docking?
41
Why are there no more manned missions to the Moon?
7
What feasibility studies are being conducted by ISRO concerning manned flight?
15
Who really coined the phrase “Light the Candle!” to commence with a rocket launch?
12
Why does NASA use the position title “Pilot”' for crew members who are not in charge of piloting the spacecraft?
11
How much manual flying is done in a modern manned spacecraft?
4
What attitude have past and modern manned spacecraft maintain(ed) relative to Earth?
4
Who are these people inside Apollo Command Module (presumably posing for advertisement photoshoot)?
0
Would a manned spacecraft on a Mars mission need large windows?