Why was ISRO's CARE reentry demonstration at 5300 m/s so slow?

This community wiki answer to What are some details of ISRO's Gaganyaan Mission currently says:

Crew Module Atmospheric Re-entry Experiment (CARE) was launched on 18 December 2014 at 04:00 UTC. The crew module was separated at the intended height of 126 km and a speed of 5300 m/s. It entered a coast phase during which it performed three axis control manoeuvres in order to ensure zero degree angle of attack at reentry.

The ballistic reentry started from an altitude of about 80 km. At this altitude, the propulsion was shut down. The heat shield experienced temperatures around 1,000 degrees C and the capsule experienced deceleration of up to 13 g.

5300 m/s at 126 km is not a typical reentry condition, it is too slow. Usually reentries are from LEO starting around 7800 m/s with a small deorbit burn of order 100 m/s just enough to get the spacecraft to encounter the atmosphere 180 degrees later. (See answers to How hard do you have to throw something off the ISS to make it deorbit? and also Circular to elliptical orbit delta V requirements)

The difference in kinetic energy between 5300 and 7800 m/s is the ratio squared, or only about 46%. Why so slow? Was there no launch capability to do it at a realistic velocity and therefore kinetic energy to dissipate, or was the capsule not yet ready to dissipate a full reentry's kinetic energy, or did this speed satisfy the specific mission requirements and a more realistic speed would have been less instructive?

I wanted to add some more information this answer. The Launch vehicle that carried the boilerplate was itself on its maiden flight, the GSLV Mk.III LVM3-X . It had a Dummy 3rd Upper Cryogenic Stage which was filled nitrogen to simulate the actual weight. Instead of sending a Dummy Payload, the CARE mission was undertaken. The Launcher could only perform a suborbital hop. Nevertheless, the CARE mission did produce the required data. like this one

One obvious question is how will this test satisfactorily validate the Re-entry performance of the module when the test conditions aren't at par with actual scenario? Specially the case with ablative thermal protection.

SRE-1 was designed to demonstrate the capability to recover an orbiting space capsule. It was also intended to test reusable Thermal Protection System, navigation, guidance and control, hypersonic aero-thermodynamics, management of communication blackout, deceleration and flotation system and recovery operations. The information obtained from this technology and experiment is being applied to the design of India's Gaganyaan crewed orbital capsule. 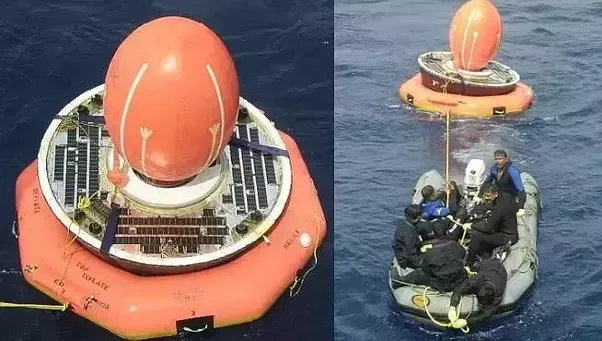 Today, January 22, 2007, the re-orientation of SRE-1 capsule for de-boost operations commenced at 08:42 am (IST). The de-boost started at 09:00 am with the firing of on-board rocket motors and the operations were completed at 09:10 am. At 09:17 am, SRE-1 capsule was reoriented for its re-entry into the dense atmosphere. The capsule made its re-entry at 09:37 am at an altitude of 100 km with a velocity of 8 km/sec (29,000 km per hour). During its reentry, the capsule was protected from the intense heat by carbon phenolic ablative material and silica tiles on its outer surface.

Therefore ISRO has already tested orbital reentry and is confident with its Systems.

The simple answer is: it was just a partial test.

Specifically, the test objectives were:

Launching on a vehicle that, were its upper stage not replaced with liquid nitrogen ballast, would have been capable of achieving a real orbit seems a bit wasteful to me, but then again it was also that vehicle's maiden flight (i.e., the vehicle was also being tested), a suborbital hop is safer for existing space infrastructure in the event of a loss of control, and an easier re-entry test makes it more likely that the other mission testing objectives could be met (for being less likely to fail).

Not the answer you're looking for? Browse other questions tagged reentry mission-design testing isro capsule or ask your own question.

26
How hard do you have to throw something off the ISS to make it deorbit?
3
Circular to elliptical orbit delta V requirements
2
What are some details of ISRO's Gaganyaan Mission?
2
Cost of making a capsule boilerplate

20
Why is it that during reentry phase a capsule cannot communicate with mission control?
13
Re-entry Heat Shield Alternative
12
ISRO's space plane on top of of a rocket - how unstable was it?
8
If there was a non-rotating skyhook in Earth orbit, what would re-entry be like after dropping from its foot?
2
Why is ISRO's PSLV named “Polar”? Are there challenges for other inclinations?
4
Why is ISRO Launch Escape System so SLOW?
19
Why can't you just parachute down right from orbit?
7
What is the orbit and expected lifetime of Crew Dragon trunk?
2
Did the Apollo Command module really “skip” within, or off of the atmosphere as a part of it's reentry program?