I'm very new, so I hope this question is within the guidelines of this group.

I remember an interview with Sally Ride where she mentioned using a larger habitat/space station that was put into a useful elliptical orbit with a useful eccentricity, and then using smaller space ships to dock with this larger one. (The advantage is the reusable station is big and can provide a better and safer habitat for the astronauts.)

I've been looking for a reference to this interview, but I haven't been able to find it.

So I've been trying to work out what sort of thing she meant, and this is what I've got so far.

Suppose we had a station whose orbit had half the orbital period of the moon. (Perhaps using an ion engine during an unmanned phase to establish that orbit.) 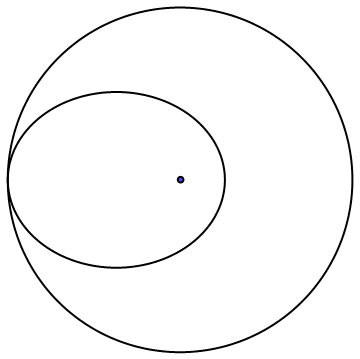 I haven't seen anyone else at NASA mention this sort of station. What would be the pro's and con's of this? Is anyone aware of any careful analysis of the usefulness of an orbit like this (or something similar)?

Similar solutions have been proposed for going to Mars as well. The upside is that you have a large vehicle for the long term (and dull) part of the mission that's safety critical - moving your people across deep space.

Downsides - you have to launch your station, that's hard. You have to resupply it in the short window it's near Earth. It has to payback it's initial cost quickly - if you're only going to use it a dozen times, and it costs 100 billion dollars... you'd be better off doing a custom build each mission, and upgrading it as you learn things.

Not the answer you're looking for? Browse other questions tagged orbital-mechanics mission-design future-missions or ask your own question.

11
Mars Orbit Upon Intercept
4
Calculating the periapsis radius of a flyby manoeuvre without knowledge of the eccentricity of hyperbolic trajectory
4
Deriving the changes in Keplerian Elements induced by small impulses
5
Simulate celestial body motion on hyperbolic trajectory (2D)
3
How does one calculate the argument of periapsis of an orbit after an arbitrary maneuver?
3
Why is Wikipedia's delta-v from the Moon to Mars transfer so much lower than mine?
1
Given r/a, what are the limits on the direction that an orbiting body could be moving (e.g. solid angle vs r/a)?
3
Why is the bend angle of a hyperbolic trajectory giving different results?
5
What does a low thrust apoapsis raising look like?
1
Why did my vis-viva math solution get so close despite being wrong? Under what conditions would it have been a good approximation?