Why Are EPIC/DSCOVR Images delayed for a day?

Images from Himawari 8 come down every ten minutes and look like they might about 20 or 30 minutes old, almost real time.

Images from the EPIC camera on DSCOVR always seem to be from yesterday.

The following site says they're delayed.

"new images will be available every day, 12 to 36 hours after they are acquired by EPIC"

Why are they delayed? I'd like to see fresh images that show close to real time weather on Earth.

I'd like to see fresh images that show close to real time weather on Earth.

It's important to remember that there are already plenty of satellites that show "fresh images that show close to real time weather on Earth", and that the Earth-facing EPIC camera is not part of the spacecraft's primary mission.

...(i)mages from Himawari 8 come down every ten minutes and look like they might about 20 or 30 minutes old, almost real time

as do images from most weather satellites?

Solar data from DSCOVR which is mission-critical is downlinked in near real time. From Spaceflight 101's Deep Space Climate Observatory:

Data from the Plasma and Magnetometer instrument suite is downlinked to Earth in real time to support the operational task of the DSCOVR mission. The NOAA Space Weather Prediction Center will use real time data products for operational space weather monitoring and the generation of watches, warnings and alerts that are communicated to the general public via various channels including the NOAA website. A number of institutions will have access to raw data from DSCOVR in real time such as the National Geophysical Data Center. Level 1 and 2 data products are made available to commercial service providers, agency partners, international partners, operational partners and US Air Force branches via the External Space Weather Data Store. The General Public will have access to legacy DSCOVR data products via the NOAA web portal.

The primary objective of the sensor complement is to measure the solar wind (np, vp, tp) and the interplanetary magnetic field at 240 RE forward of the Earth.

The DSCOVR solar wind/IMF data will be downlinked to the Real Time Solar Wind Network (RTSWnet). 57)

Secondary mission objectives: Earth observations. The Earth viewing instruments on DSCOVR have a continuous view of the entire sunlit face of the Earth.

57: Changing of the Guard: Satellite Will Warn Earth of Solar Storms

You can see that the EPICS image data is downlinked to Wallops, from which DSCOVR might only be high enough in the sky for 8 hours a day or less in the winter, depending on its position within its Lissajous orbit around L2. So image downlinking will not be real near time. 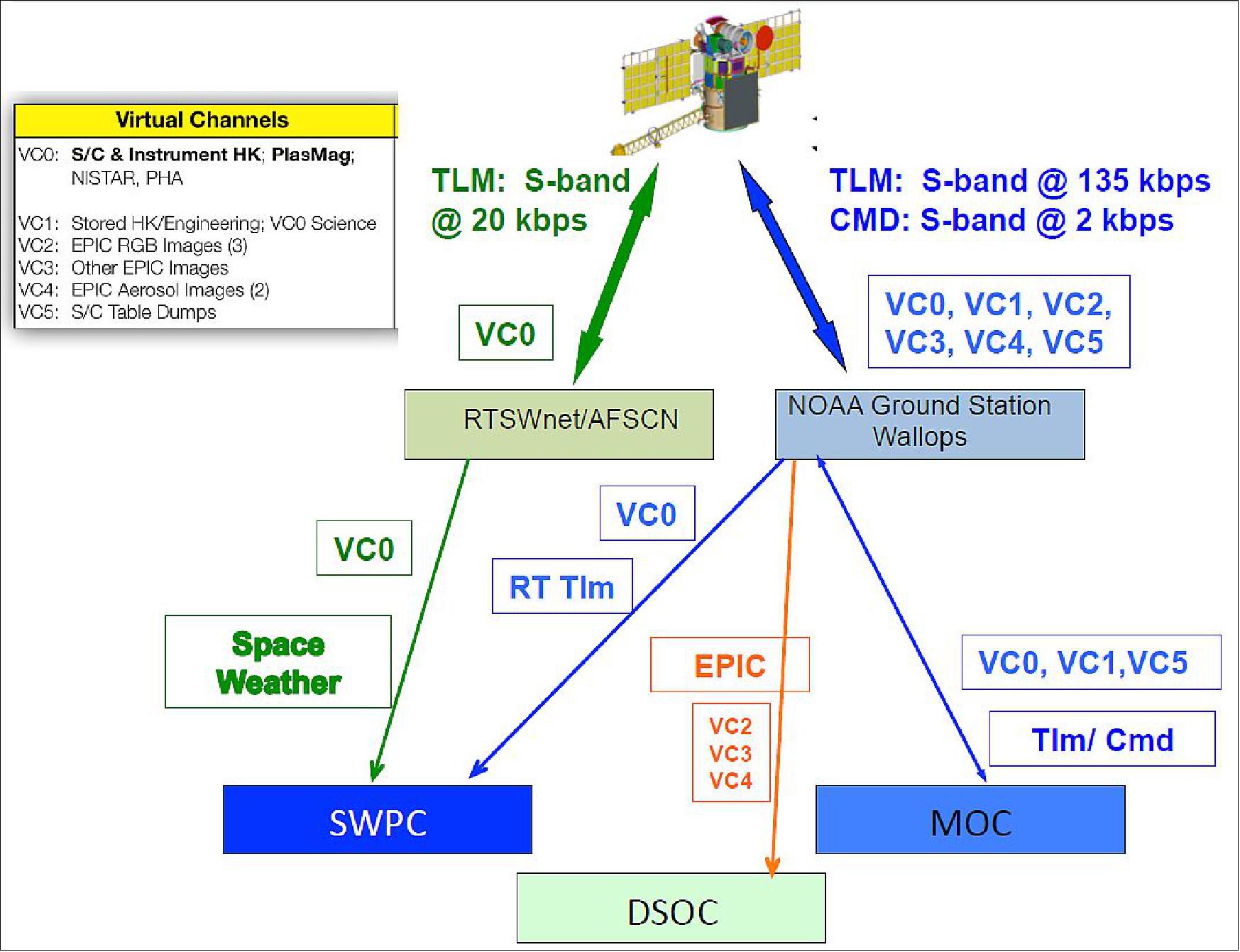 There is probably some aspects that relate to the firewalling and human review of data, but I can't address those directly. The Spaceflight 101 article also includes this diagram partially addressing this: 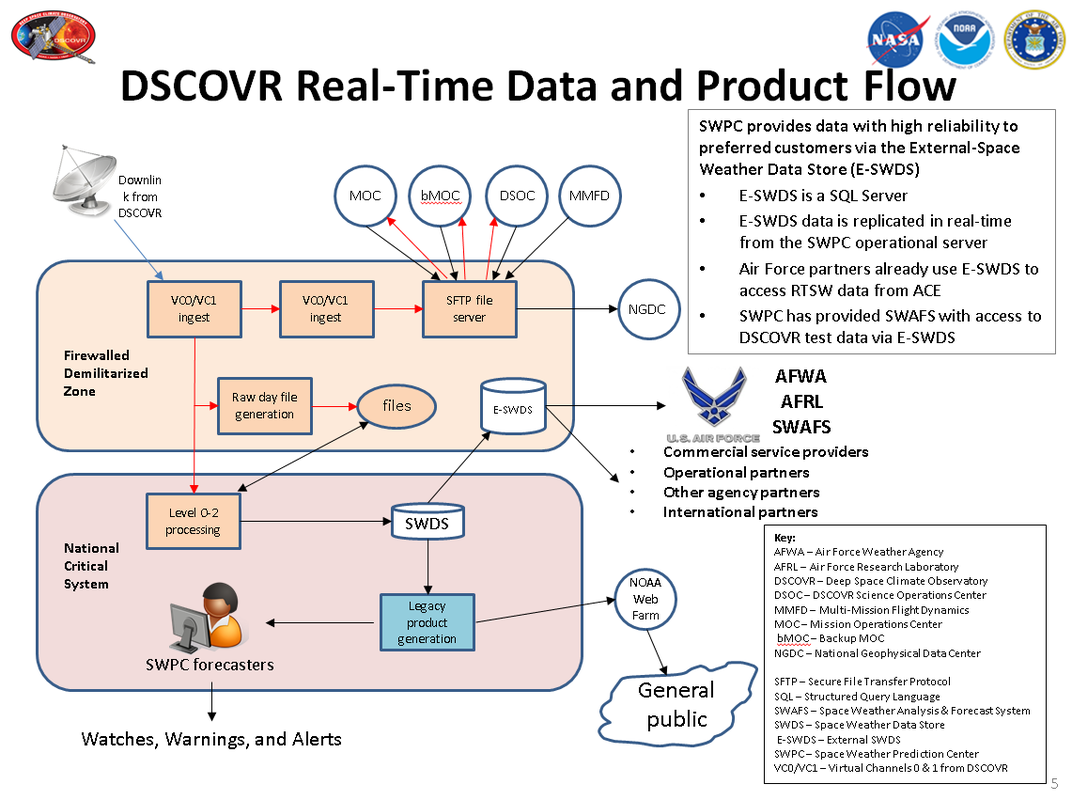 Not the answer you're looking for? Browse other questions tagged dscovr or ask your own question.

1
In terms of satellite networks What exactly are RTSWnet/AFSCN and CDAS (NEN, DSN as needed)? Are they like TDRS but for strictly military data?

10
Why does DSCOVR appear to be missing solar cells?
3
Why has no TLE been published for the DSCOVR satellite and the Falcon 9 R/B?
6
What is the timeliness of DSCOVR-EPIC image acquisition and public release?
9
Why is there a purple dot in the middle of this EPIC image?
4
How did DSCOVR use its ten thrusters for the long burn maneuvers MCC and LOI?
2
Why does DSCOVR's camera EPIC see at least 13 sunrises and sunsets per day?
1
How could the recently explained “glints” seen by DSCOVR appear so compact considering the finite size of the sun?
5
Why are images from DSCOVR EPIC unavailable for certain dates?