If the Earth spun clockwise, would Florida have still satisfied the requirements for the US launch center in the 1960's?

In a comment under the question If the Earth spun clockwise, how would that affect Space Exploration? I wrote:

Kennedy Space Center would be a lot closer to JPL; not sure what all happens with the Moon, if it doesn't also go the other way I don't think it would be where it is now.

to which was replied

KSC would still be in Florida, but on its west (Gulf of Mexico) coast.

I wrote KSP rather than Cape Canaveral because I was more confident that I wouldn't mipsell it, I probably should have written the latter. (See excellent answers to What is the difference between Cape Canaveral and Kennedy Space Center?).

Question: At the time of the build up of Cape Canaveral Space Force Station in the 1960's for the US space program, if the Earth rotated the opposite direction would the west coast of Florida have matched all of the constraints in terms of downrange safety for all inclinations the planners envisioned access to and provided ground tracks that allowed for tracking stations in friendly locations for the early crewed orbital missions, or would California have provided a location more suitable to their perceived needs for a space launch center at the time?

Cape Canaveral Space Force Station (with launch pads annotated including of course some built long after the 1960's). From NASA's PIA01918:

The John F. Kennedy Space Center, America's spaceport, is located along Florida's eastern shore on Cape Canaveral. Established as NASA's Launch Operations Center on July 1, 1962, the center has been the site of launching all U.S. human space flight missions, from the early days of Project Mercury to the space shuttle and the next generation of vehicles. 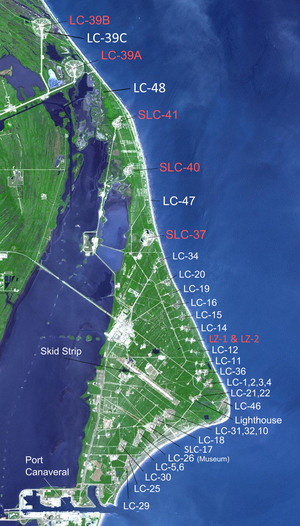 Like Cape Canaveral, it is on an island on the Florida coast, close enough to be reached by bridges. Its latitude is 2 degrees south of Canaveral (26°26′23″N versus 28°29′20″N), so actually slightly better. It's bigger in area than Canaveral (86 km$^2$ versus 5 km$^2$); plenty of room for the military, NASA, plus a nature preserve. 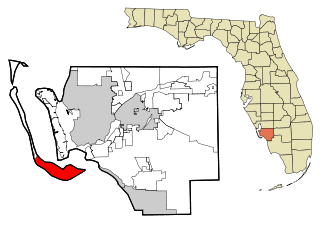 According to Wikipedia, it was sparsely populated until a bridge to the mainland was built in 1963:

Legendary pirates' dens aside, the first modern settlement on Sanibel (then spelled "Sanybel") was established by the Florida Peninsular Land Company in 1832. The colony never took off, and was abandoned by 1849. It was this first group that initially petitioned for a lighthouse on the island. The island was re-populated after the implementation of the Homestead Act in 1862, and again a lighthouse was petitioned. Construction on the Sanibel Island Lighthouse was completed in 1884, but the community remained small. In May 1963 a causeway linking Sanibel and Captiva to the mainland was opened, resulting in an explosion of growth.

Not the answer you're looking for? Browse other questions tagged launch range-safety ground-station united-states ground-track or ask your own question.

42
What is the difference between Cape Canaveral and Kennedy Space Center?
17
If the Earth spun clockwise, how would that affect Space Exploration?
10
What is the farthest distance a failed rocket has landed from its launch site?

8
Why did ISRO require additional tracking ships in the South Pacific for its MOM mission?
16
What is involved in clearing air space for an orbital launch?
17
Why do certain times of day have more launches than others?
11
How far south can one see a rocket launch from Cape Canaveral, Florida?
5
How does one dogleg from Florida to a sun-synchronous orbit?
1
First interplanetary launch from California! How far from Earth will InSight be when it separates from the Centaur 2nd stage?
2
Where can I find launch trajectory data of the space shuttle?
1
What were the two circa 1965 semi-polar missions launched from Cape Canaveral?
28
Would it have been possible to launch rockets in secret in the 1960s?