Did they mount the Apollo Mobile Service Structure (MSS) to the launch pad using nuts and bolts to be prepared for a storm?

The Mobile Service Structure (MSS) was used for every launch preparation of the Saturn V. It was removed some hours before launch. The MSS is the white tower on the left side. 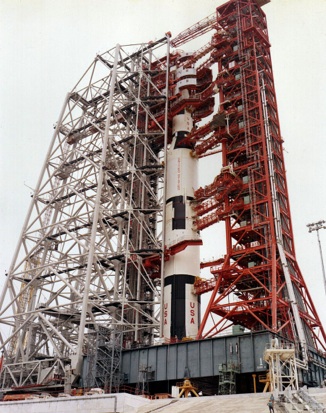 The MSS was moved and removed using the same crawler as the Saturn and the red launch tower. Did they mount and dismount the MSS to the launch pad each time using nuts and bolts?

This is a followup question to this posting.

apollo-program history saturn-v
Share
Improve this question
asked May 2 '20 at 16:16

The A11 press kit has some information about the MSS:

So the MSS is secured to four mount mechanisms. But no details about it. 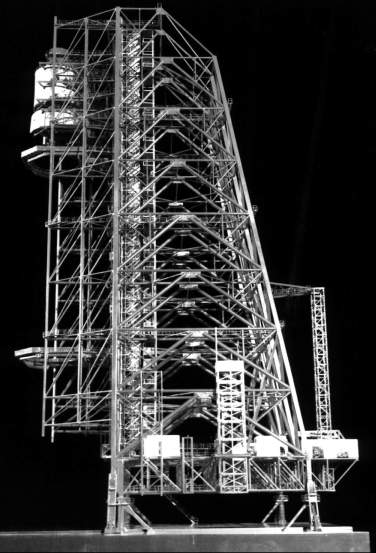 Wind loads were a second major concern for the tower's designers. On 28 March representatives of the Marion Power Shovel Company, the Corps of Engineers, LOC, and Rust agreed to design for a maximum wind velocity of 100 kilometers per hour. When resting on its supports at the launch pad, however, the arming tower was to be able to sustain considerably higher winds. NASA officials cancelled the latter requirement two weeks later: in the event of a hurricane, the tower would be removed from the pad area.

Not the answer you're looking for? Browse other questions tagged apollo-program history saturn-v or ask your own question.

27
How did they access the LM to mount the flag package while the Apollo stack was already on the launch pad?

16
In the Saturn V launch sequence, what defined COMMIT, and what happened between COMMIT and LIFTOFF?
19
What was the reason to use different fuel for the Apollo Service Module propulsion system and reaction control system?
26
How did sloshing prevent the Apollo Service Module from moving safely away from the Command Module and how was this fixed?
7
Was this 1969 space shuttle feasiblity study too optimistic?
9
Why did the Vertical/Vehicle Assembly Building have four doors?
7
Loading tanks for supercritical oxygen and hydrogen on the launch pad, how to achieve low temperature and high pressure?
10
How much of the Apollo gantry, tower, and pad were destroyed on each launch? How much could be reused?
27
How did they access the LM to mount the flag package while the Apollo stack was already on the launch pad?
11
Why were the Titans so expensive?