Has anyone ever flown to space in a vehicle they helped build?

So has anyone who had a hand in constructing a space vehicle actually had a chance to travel into space in the spaceship they helped build?

(Too long? Skip to the boldface at the bottom.)

Forgive my wordiness, but I appreciate that it has turned out to be extremely difficult to answer this question because the term “helped build” is not rigorously defined. Furthermore, space vehicles are very complex beasts, with millions of parts, some of are not unique to space vehicles. The fact is that a team of thousands of people contribute to the mission, and those that earn the title of astronaut along the way may have also contributed in a variety of subtle ways to that team and therefore to the overall mission which includes building the vehicle.

It’s hard to put a finger on exactly which kinds of contributions are most in the spirit of “built the vehicle”. I’m sure every contributor will claim that they couldn’t have built it alone, and that every team member’s contributions were important – critical even. I do not want to come across as thinking any less of any individual contributor. A traditional shout out often goes to the person who “sweeps the floors” as being just as critical as everyone else – and I believe this too. We’re all in this together.

“Did you build it?” is indeed a complex question full of nuance and ambiguity. So be clear in your answer what the contribution of the astronaut was. Each person will be their own judge of what is the most compelling contribution. But the yes/no answer to “did the astronaut help” is clearly not going to be the right way to address this question for reasons that have become evident in the comments: the definition of "helped build" can be broadened in most cases to encompass just about any team member including the astronauts themselves.

I absolutely love reading about all the contributions that humanity's space travellers have made to building the vehicles that put them above the Kármán line. Thanks for sharing that here, but allow me to offer a more tightly constrained qualification for an objective answer.

Here’s the litmus test I would apply: If a child saw the astronaut making their contribution to the vehicle, would the child be likely to describe that contribution as “building the spaceship”. The few young people I’ve consulted about this have responded by saying they expect someone who “helped build it” to be seen putting pieces of it together and I think that best guides the spirit of this question.

Yes, Konstantin Feoktistov flew on Voskhod 1 which he had helped build as an member of Korolev's design bureau. Flying a civilian engineer rather than a military pilot was a political decision by Korolev, and the Russian Space Agency heralded the flight as follows

The expedition made Mr Feoktistov the first spacecraft designer to have tested his brainchild under real conditions.

This mission was remarkable for the fact that it involved for the first time three men in space in one spacecraft. Which made for such a crammed capsule that the cosmonauts could not even wear spacesuits. A "courageous" gamble with great danger as evidenced by the fatal depressurizing of Soyuz 11 a few years later.

Notably, Feoktistov was part of the two cosmonaut party that visited the US as guests of NASA in the 1960s. They interacted extensively with their American counterparts, including Gene Cernan who mentioned this episode in his book Last Man on the Moon. Interestingly, in an illustration of common stereotypes Cernan described Feoktistov as a "thin, wimpy engineer" in contrast to the "jolly bear of a man" Georgy Beregovoy who was a fellow military pilot rather than spacecraft engineer.

There was the astronaut Walter Schirra introducing the usage of Hasselblad cameras for Mercury 8 (MA-8) in October 1962. Those cameras were used also for Gemini and Apollo.

Hasselblad and NASA’s journey together began in 1962 during the Mercury program. Prospective NASA astronaut and photography enthusiast Walter Schirra had his own Hasselblad 500C with a Planar f/2.8, 80mm lens. Knowing the high quality of the Hasselblad camera, Schirra suggested to NASA that they use a Hasselblad to document space since the previous camera model utilised delivered disappointing results. After buying a few 500Cs, a weight-loss program followed including removal of its leather covering, auxiliary shutter, reflex mirror, and viewfinder. A new film magazine was constructed in order to allow for 70 exposures instead of the usual 12. Finally, a matte black outer paint job minimized reflections in the window of the orbiter. The streamlined Hasselblad would find itself in the payload for Mercury 8 (MA-8) in October 1962. The successful, high quality images that Schirra captured across his six orbits of the Earth would spark a new chapter in the history of Hasselblad and a long, close and mutually beneficial cooperation between the American space agency and the Swedish camera manufacturer.

In the summer of 1962, Walter Schirra — who would soon become America's third man to orbit the Earth — walked into a Houston photo supply shop looking for a camera he could take into space.

He came out with a Hasselblad 500C, a high-end Swedish import that had been recommended to him by photographers from Life and National Geographic.

"He was sort of an amateur photographer," Jennifer Levasseur, a curator in charge of the Smithsonian National Air & Space Museum's astronaut cameras, says of Schirra. "Somewhere along the line, the decision was made that he could select what camera was flown on his flight."

Schirra's was a much more sophisticated — and pricey — choice than the simple Ansco Autoset that John Glenn bought for \$ 40 at a Cocoa Beach, Florida, drug store. Glenn used it to take pictures from orbit on Friendship 7 in February 1962. The Hasselblad retailed for about \$ 500 and used a much larger negative than Glenn's 35 mm camera. It also sported interchangeable, Carl Zeiss lenses and removable film magazines.

This covers a mission affecting action by an astronaut that historically altered what happened on his flight - but it's arguable whether it meets your criteria. John Glenn personally selected and bought a camera and took it back to have it modified to suit the mission needs. So he was hands on involved in the acquisition of a camera involved in the mission and no doubt the modifications made to it were made at his direction.

It has long been reported that for John Glenn's first orbital Mercury flight no photo taking capabilities were provided - an astounding omission if true. I have read that NASA separately provided a Leica camera - but do not know if it was used on the mission or why JG would have purchased the Minolta if another suitable camera was available.

John Glenn "went into town" Ansco Autoset 35mm camera - a rebadged Minolta Hi-matic.
This was "somewhat modified" to suit the mission needs. See photos below.
Some years back I bought an identical camera to the one that JG purchased to add to my camera collection. I think it cost me about $20 - I imagine that the original in the Smithsonian is priceless.

A Leica camera is also mentioned but the links are broken. It's suggested in the writeup that the Leica was used for the published eary shots - but JG mentions the Ansco in his accounts. 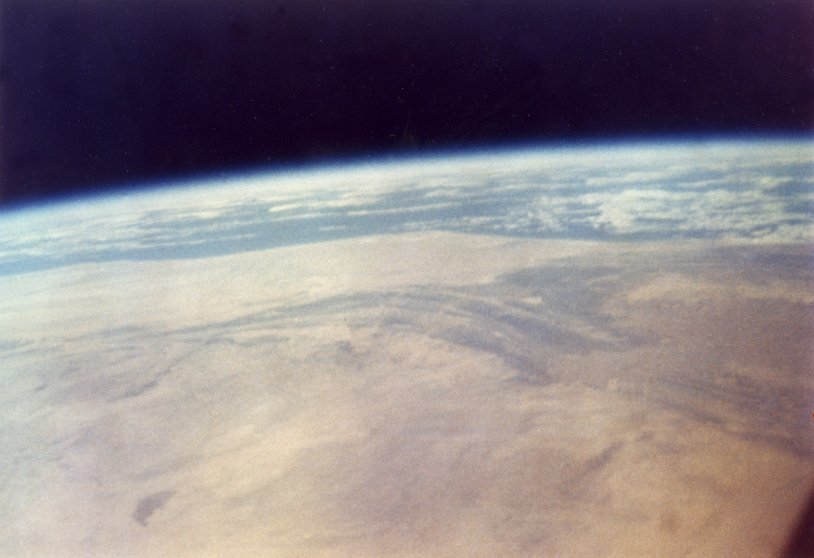 The camera, on display in the Smithsonian aerospace Museum. 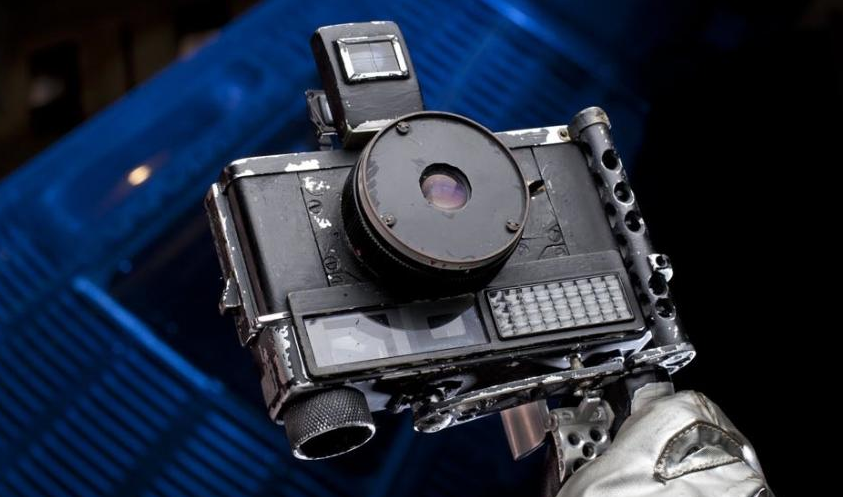 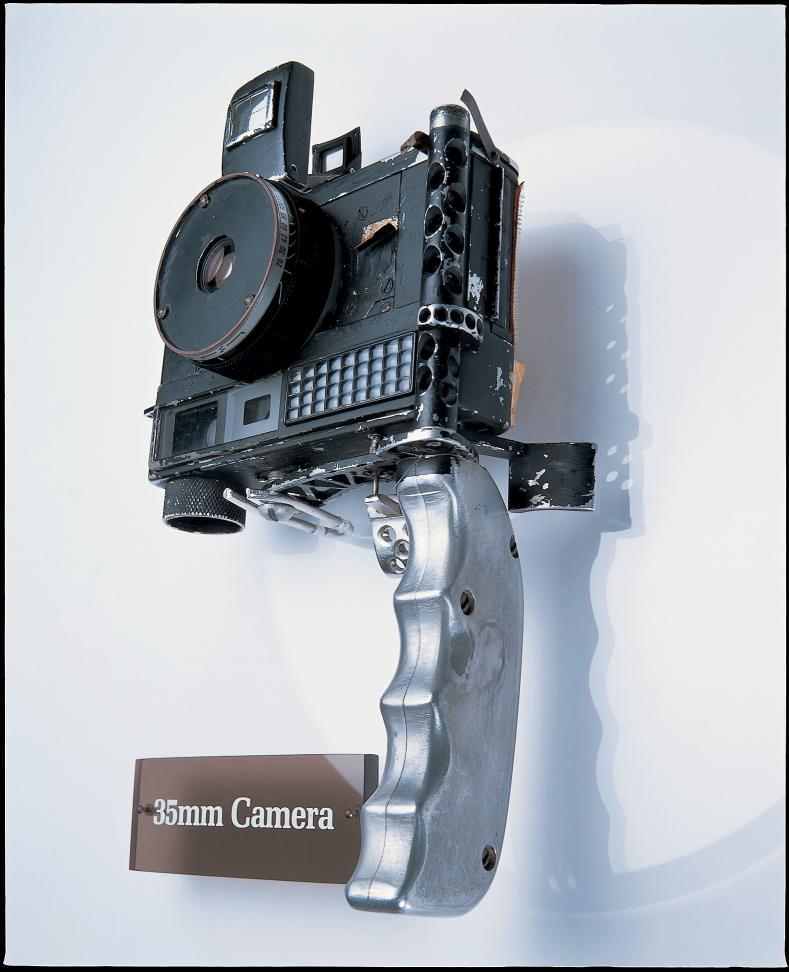 Not the answer you're looking for? Browse other questions tagged astronauts record or ask your own question.

30
How many astronauts have reported an alien encounter of some kind?
18
Who has been the closest to/furthest from the Sun?
18
How many astronauts never got to fly in space in their astronaut career?
3
How long can an astronaut stay in space and later have children?
13
What is the farthest that a "human satellite" has been from their spacecraft?
11
What is Astronaut Sunita Williams wearing on their wrist?
4
Is retired astronaut Scott Kelly now the same height as his brother?
3
Most noodle-like (highest aspect ratio) orbital launch vehicle ever?