How much lead time would a statite need to flyby an interstellar visitor?

The Dynamic Orbital Slingshot link shows the image below, which from an orbital-mechanical perspective is much better than the one shown in the Phys.org link!

Question: If an object approached the Sun from far away on a $C_3=0$ (zero energy, parabolic eccentricity=1) trajectory for example, and a statite† parked at radius $R$ wanted to pass by it at close range, how soon would it have to "release" and fall in a straight line to intercept it as a function of the object's perihelion. Would the distance that the object was detected $R_D$ have to be much farther than $R$ from the Sun for this to work?

If instead it used its solar sail throughout the trajectory rather than just "going ballistic", would the required detection distance be smaller? Could it be smaller than $R$ in this case?

†A static satellite would be "parked" far from the Sun by balancing the attractive gravitational force with a large, very low mass solar sail, roughly 650 square meters per kilogram at any distance since both forces scale as $1/r^2$.

where the factor of 2 comes from perfect reflection. See also Statites - Are they possible in anything but theory? 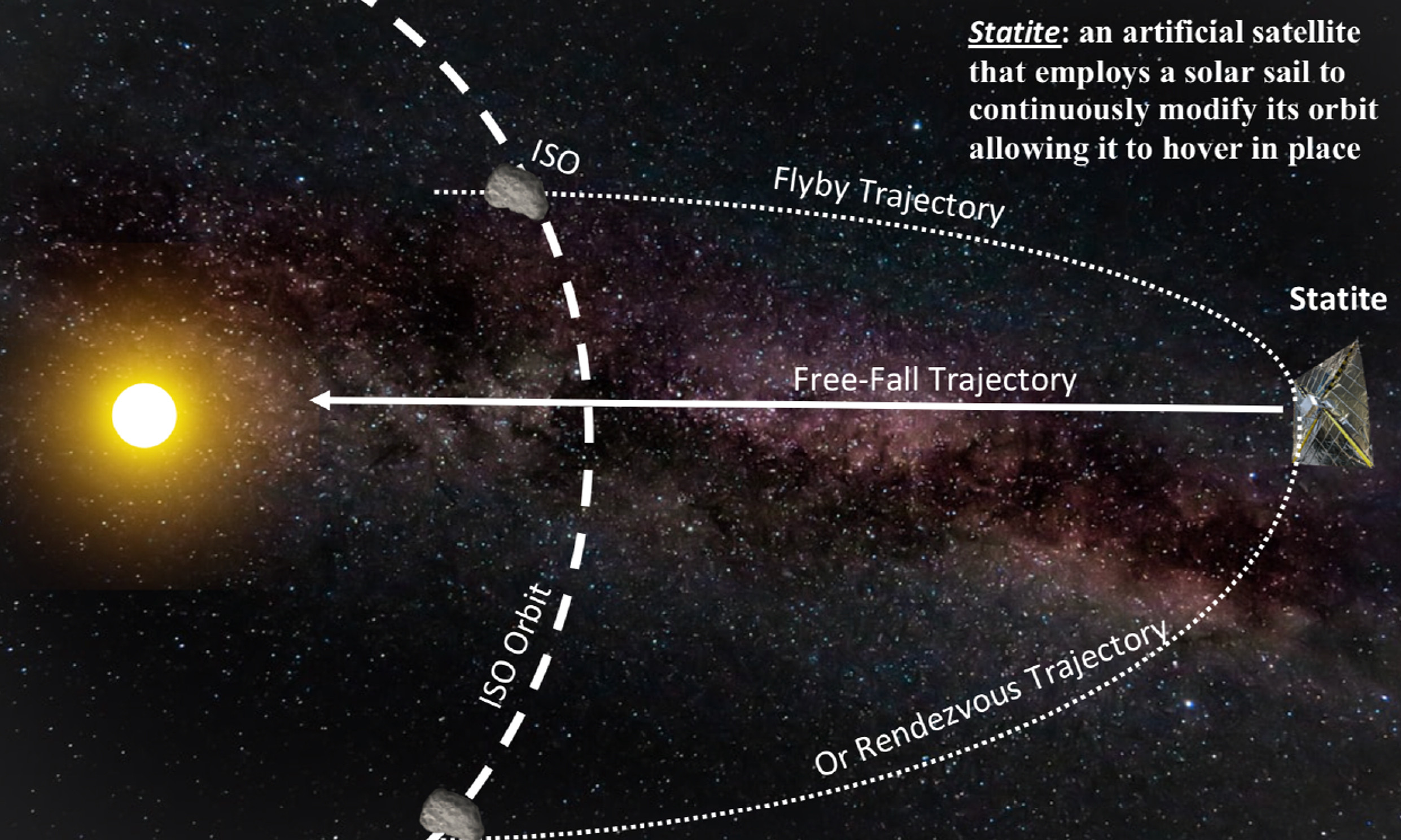 The formula above is for the free-fall time to a point source of gravity, with $\mu$ being the Standard gravitational parameter for the Sun.

So this could be applied to the trajectory of a "released" statite.

Filling in the numbers it appears that for $R$ being the radius of the orbit of Jupiter the minimum lead time would be more than 2 years !

Not the answer you're looking for? Browse other questions tagged orbital-mechanics rogue-planet static-satellite or ask your own question.

15
Has a solar sail been used on an orbital mission?
4
Statites - Are they possible in anything but theory?

4
How much delta-v would Hayabusa-2 need per day to remain 20 km sunward of Ryugu?
4
How would a Jupiter flyby have helped to get to the Sun? Why was it later ruled out?
2
Bombing the Moon: how much debris would there be in stable orbit?
5
How much harder would space exploration be if the Earth rotated like Uranus does?
8
What altitude would an aphrodiosynchronous satellite need?
6
Time to reach interstellar space
5
Orbital Mechanics and Launching into the Sun
2
How is delta-v calculated for an interstellar journey?
1
How to calculate time since ascending node crossing?