How much silver was left on the Moon by Apollo Lunar Modules?

Both the descent and ascent stages of the Apollo Lunar Module were powered by silver-zinc batteries. 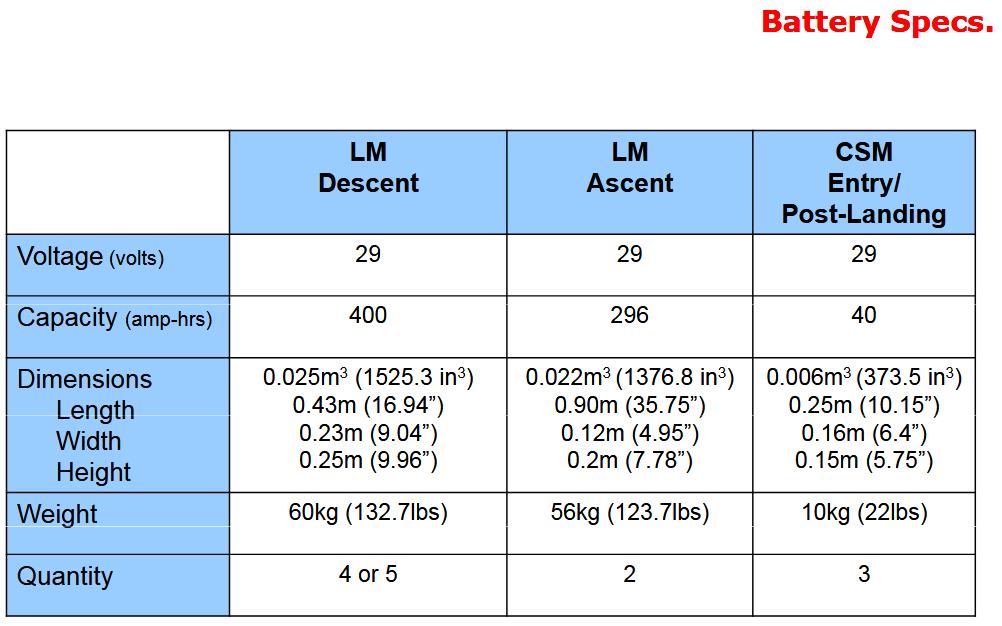 The total weight of these batteries were 296 kg and 356 kg for the extended missions with longer stay on the Moon.

How much silver was at least left on the Moon by Apollo LM batteries?

Well, as an approximate lower bound you can use the listed amp-hours of capacity and the battery chemistry to determine how many atoms of silver would be needed. To produce one amp-hour requires 3,600 Coulombs of charge. In silver-zinc batteries, each atom of silver is reduced twice, giving off two electrons.

Finally, we can calculate the minimum silver for each type of battery:

Having 20-30% of the batteries be silver makes sense, as there was also roughly the same amount of zinc in the batteries, as well as electrolyte and a casing.

Also, although they were not included in your question, the lunar rovers used silver-zinc batteries of 23 cells each, and the batteries of the 3 lunar rovers, at 242 amp-hours each, would add 34kg of silver total.

Not the answer you're looking for? Browse other questions tagged the-moon apollo-program battery or ask your own question.

20
Why choose to crash the Apollo lunar lander ascent stage after it ascended?
13
How much mass could the Saturn V rockets have landed on the Moon if nothing was coming back?
3
Can landing modules use left over fuel from earlier stages?
4
Was an elliptical orbit considered for the CSM when planning the Apollo moon landing missions?
5
How much wax is on the Moon? (Lunar Roving Vehicles)
12
Did the Apollo lunar module descent stage have a role as a sort of service module?
7
How long is the Apollo Lunar Module extraction window?
5
How many Lunar Surface Hasselblad cameras were left on the Moon?
6
How "hard" did Apollo 12 turn left just before it landed?
4
Did any Apollo missions have enough fuel left to bring back the LM ascent stage?