Did any of the Space Shuttle RCS covers ever stay on?

This dashcam video of the STS-133 launch shows some sort of plastic bag looking objects that blow off the nose of the shuttle in the first few seconds after liftoff. This answer says they are the RCS covers designed to protect the thrusters from dust, etc.

The video below is linked to just before the exact time the objects are first seen, which is about 45 seconds in.

launch space-shuttle protection
Share
Improve this question
edited May 14, 2020 at 9:49

The final version did (history below). They were made of Tyvek and had a pocket/parachute built in. I can't find a great picture but this at least shows the parachute. 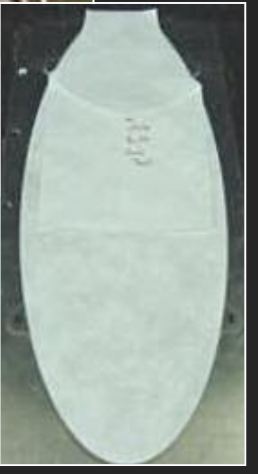 If they stayed on for the entire ascent, that would be OK. The first jet firing would dislodge them. The fear was that if they detached at the wrong time, they could damage the Orbiter tiles or windows.

After the STS-107 failure a huge effort went on in the Space Shuttle Program to examine all possible sources of ascent debris and reduce the risk wherever possible. Pieces of the original "butcher paper" covers had been found jammed in the front window seals. This caused a switch to the Tyvek parachute covers. That didn't go so well at first, on the first couple of flights after STS-107 some covers got caught at the edge of the thrusters and fluttered against the thermal protection system or released later than desired.

Not as far as I know, at least not after we started scanning the thermal protection system on orbit (again, this was after STS-107). But again, I don't think anyone would care if they flew to orbit, it was the critical release period during which they could theoretically damage the Orbiter that people cared about.

Here is the history of the covers from Wings in Orbit p. 174 which is also the source of the picture.

During operations, Orbiter engines needed rain protection after the protective structure was moved away and protective ground covers were removed. This requirement protected the three upward-facing engines and eight of the left-side engines from rainwater accumulation on the launch pad. The up-firing engine covers had to prevent water accumulation that could freeze in the injector passages during ascent. The side-firing engine covers prevented water from accumulating in the bottom of the chamber and protected the chamber pressure sensing ports. Freezing of accumulated water during ascent could block the sensing port and cause the engine to be declared “failed off” when first used. The original design concept allowed for Teflon ® plugs installed in the engine throats and a combination of Teflon ® plugs tied to a Teflon ® plate that covered the nozzle exit. This concept added vehicle weight, required special procedures to eject the plugs in flight, and risked accidental ejection in ascent that could damage tiles. The solution used ordinary plastic-coated freezer paper cut to fit the exit plane of the nozzle. Tests proved this concept could provide a reliable seal under all expected rain and wind conditions. The covers were low cost, simple, and added no significant weight. The thruster rain cover material was changed to Tyvek ® when NASA discovered pieces of liberated plastic-coated paper beneath the cockpit window pressure seals. The new Tyvek ® covers were designed to release at relatively low vehicle velocity so that the liberated covers did not cause impact damage to windows, tile, or any other Orbiter surface.

I don't have a great reference for the other stuff; I worked in the Space Shuttle Program Systems Engineeering and Integration Office during the 2nd return to flight era. While not directly involved with the debris issues, it was impossible to not hear about it.

There is some discussion of the Tyvek covers and problems with their releases in the book Return to Flight by James Peters. Here's one (context is the STS-114 flight):

One of the Tyvek covers on the forward reaction control system released much later than designed...They posed a transport and impact threat ... if the Tyvek hit a window with high velocity. They were designed to release during ascent before the vehicle reached 170 miles per hour...

The book is a very detailed accounting of the struggle to deal with ascent debris after the STS-107 failure. But unfortunately it does not include an index.

Not the answer you're looking for? Browse other questions tagged launch space-shuttle protection or ask your own question.

31
What are these membranes at the aft end of the Shuttle that get torn off during lift off?
16
Does any first-person video of a rocket launch exist?
5
Are nozzle plugs taken out before launch or are they ejected upon ignition?