How to simulate Earth's gravity in future colonies on other planets?

What would be a viable means to simulate and maintain Earth's gravitational acceleration in a future colony built on another planet?

I am mainly focusing on terrestrial planets, where a colony could be built on the surface, such as on Mercury, Venus, Luna, Mars, gas and ice giant moons, minor and dwarf planets where the gravitational constant is less than on Earth.

Or would it instead be a case of a specific physiological adaptation occurring over time to the lower gravitational effects on these planets?

There are a few potential ways to go about this.

1. Increase the mass of the planet

Obviously, if the mass of the planet is equal to that of earth's then you have the same gravitational attraction (provided the spin is the same, I'll get to that).

For planets with more mass than earth, you would need to decrease the mass to achieve this effect.

That's not easy though so an alternative is

This technology doesn't really exist, that I know of, but if one could apply a 'repulsing' effect from the ceilings on each person in the room then the added downwards force would feel like a stronger gravity.

Conversely, if you wanted to decrease it you would want to apply an attractive force towards the ceiling. But once again, these technologies don't exist yet, nor do I have any thoughts on how would create them.

To me, this seems like the most viable of the options. Have metallic flooring and boots that are magnetic using electromagnetic induction. This allows you to 'turn on and off' the magnetism. If you are being attracted to the floor by the magnets then you get the advantage of it feeling like a stronger gravity on your legs and holds you to the ground, but your body will still experience less weight and there will still have less weight on those objects that aren't being magnetized.

Centrifuges with long tethers (or airbeams) could be used also on the ground. Below is an illustration where the crewed part of the carousel is below ground for protection against radiation. According to the source the centrifugal radius would be 33 meter long to achieve 0.5 g (with 0.17 g given naturally on the Moon). 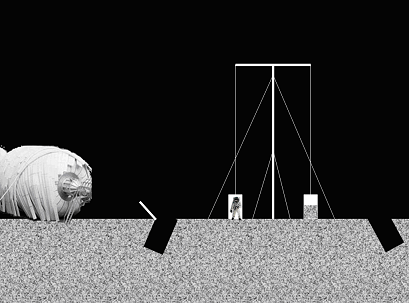 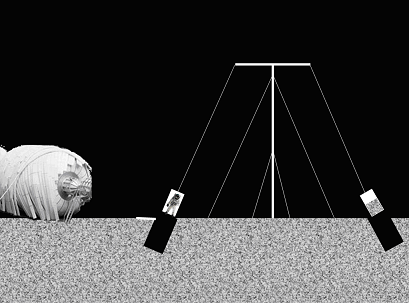 From www.cislunarone.com by Dr. Doug Plata.

Firm ground with useful gravity is indeed a rare resource in the Solar system. Mars and Mercury with 0.38 g might be enough for human health. If Lunar gravity is enough then we have half a dozen other bodies. But then there's Ceres with 0.03 g which certainly is useless.

A more phantastic idea is to build a tunnel inside an asteroid and spin it up so that you'd walk with your feet outwards on the inside of the surface. Future space exploration could be a funny thing!

I talk about this at What's the minimum spin hab?

We have two data points: 0 g and 1 g. We don't know the effects of partial g. Maybe Mars or Lunar gravity can keep us healthy. Or maybe not.

Valeri Polyakov spent 438 days in orbit yet suffered only minor bone loss. However he had a lot of self discipline and maintained a challenging exercise regimen.

Besides muscle and bone atrophy, drainage is also a problem. We rely on gravity to drain our sinuses, for example. I don't think a full g is needed for liquid to flow down hill. Besides helping with the body's housekeeping chores, partial g could also enable flush toilets, conventional showers, etc. Less troublesome hygiene would be a huge morale booster and improve health (in my opinion).

Looks like LocalFluff also talked about centrifuges. Here's my take, which is on similar lines.

It would be limiting for individuals to allow their physiology to weaken from lack of gravity (as long as a return trip to a higher gravity at a later date was possible or desired). It may be ok to let the plants and animals adapt, however, which reduces the scope of the problem to maintaining the health of human beings.

Carnival rides on Earth can create higher than earth gravity effects. NASA is already looking into applications of this.

One possible solution for a colony on a lower mass planet like Mars, where there is some gravity but it is still weaker than earth, is to provide centrifuge style exercise areas as big as ferris wheels that spin constantly (except for planned maintenance or no-use time periods).

A pod (that traces an identical circular path) could be spun up to speed to match the centrifuge and docked magnetically. The people inside the pod could be spun up to speed, dock, jog for an hour or lift weights or do squats, then get back in the pod and go home. All this, of course, would need to be refined a fair amount for safety and convenience. However, as long as the centrifuge had a ceiling that was no higher than, say, 12 feet, a person could safely fall to the "ceiling" in the event that the centrifuge lost power (due to the lighter gravity making a fall like this safer than it would be on Earth).

I would imagine that the exercise chamber, if designed like a ferris wheel, would have highest gs when a person standing still has their feet pointed at the Martian ground and the least gs when their feet point toward the Martian sky. So it would require an adjustment period so that people don't injure themselves by miscalculating the amount of gravity at any one moment (i.e. landing too hard). This assumes the exercise chamber doesn't have smart enough motor programming to speed up and slow down to manage the changing gravity.

That would help solve the problem of the whole-body effects of gravity, unlike wearing ankle weights. You could even choose your amount of gravity to be a little higher than earth if that would reduce the time needed for a person to stay strong.

Another NASA article on their explorations with centrifuges.

Creating artificial gravity on another planet or moon could be accomplished the same way it would be done in space, by moving a vehicle in a circle. It would be difficult to move a very large vehicle in a circle such as spinning it, but a smaller vehicle could travel in a circle on a banked track. The system might be similar to cars moving on a banked-track at a motor speedway. Maglev systems would probably work better because of less wear on wheels. The track would need to be about one mile in diameter so that occupants would not feel the Coriolis-effect of moving in a circle as in a small diameter systems. The slope of the track could be varied depending on the velocity required to produced a specific required gravity.

1
How can veriable artificial gravity be created in a full colony on another planet, or moon?

10
Back to Earth's gravity, what astronauts do?
14
Is solar system active cryovolcanism a potential viable power source for future colonies?
8
Adapting to Increased Gravity on Alien Planets
3
Objects speeding up due to planets gravity?
3
Does gravity affect sound on different mass planets?
3
Gravitational assists from bodies other than planets
11
Do any planets other than Earth have artificial satellites?
6
How would you move in low gravity without a suit?
1
The Earth's Moon versus Phobos and gravity