I am wondering if the kinetic energy of the Sun's solar wind could energize heavy ions to the point in which they would produce enough momentum to propel an interplanetary spacecraft.

To help illustrate how this ion-based system might work, I have created the following conceptual drawing: 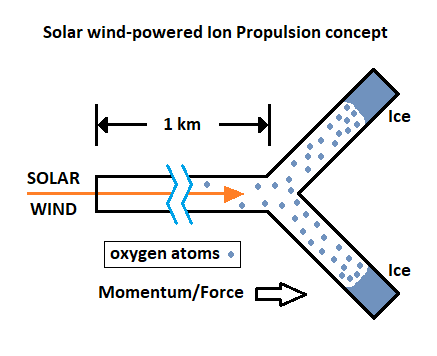 This drawing is showing a long pipe (1 kilometre long) that is connected to two additional pipes (unspecified length) via a Y-pipe fitting. All three pipes are 3 feet in diameter. The main pipe is open at one end and this end will be kept pointed directly at the Sun to allow the solar wind to keep flowing into the long pipe. The other two pipes are open at the Y-pipe junction area and are sealed at their other ends.

Ideally, the heavy ions needed for this system could be provided by using two blocks of ice (water). A mechanical device could be used to insert a block of ice into each pipe, which would be placed back towards the sealed end of each pipe.

I believe what should happen then is that the high-velocity elements moving within the solar wind will ricochet off the angled surface of the Y-pipe fitting and will then enter into the two pipes. These elements will collide with the ice, heating it up, and causing tiny bits of ice to begin coming off of it. These tiny bits of ice will make their way towards the Y-pipe junction area.

Once these tiny bits of ice enter into the oncoming solar wind, they will be broken down into hydrogen ions and oxygen atoms, and then the solar wind will push these two elements back towards the angled surface of the Y-pipe at which they will bounce off and into the two pipes.

The solar wind should transfer kinetic energy and momentum into these hydrogen ions and oxygen atoms, and when these two elements impact with the block of ice, they will transfer their gained momentum into the ice, and thus into the pipe holding the ice, and thus to the spacecraft causing it to be propelled forward. All the heated, ricocheting ions within the two pipes will keep causing the hydrogen ions and oxygen atoms to keep bouncing around and they will eventually come back down into the Y-pipe junction area, and the kinetic energy/momentum transfer process will be repeated.

I don't believe any hydrogen ions nor the oxygen atoms could travel all the way down the 1 km long pipe and out into outer space because the solar wind flowing in the pipe should slow them down to a stop and then reverse their direction back towards the Y-pipe junction area. This would be ideal because no propellant (ice) would be lost.

An alternative means of producing thrust would be to put a block of ice near the open end of the long pipe, and as exposure to the solar wind causes the ice to sublimate into a cloud of hydrogen ions and oxygen atoms, the solar wind will then accelerate them down the pipe and they will then bounce off the angled surface of Y-pipe junction, transferring kinetic energy/momentum to the spacecraft.

Would this engine produce any thrust? Yes, but not in the way you envision. Ice in a vacuum sublimates to steam, which will create a tiny bit of pressure (on the order of a few Pascals, barely enough to even measure). As the steam escapes down the tube and out into space, it will produce a slight thrust in the opposite direction. The fact that the sun is shining on the engine will produce some heat, which accelerates the sublimation and increases the thrust.

Now, even this tiny bit of thrust can be useful. Long-range probes can use tiny but continuous thrusts to steer themselves, and they can get a lot of speed that way. However, there are much more efficient ways of generating that thrust than lifting the tons upon tons of ice that such a probe would require.

The solar wind pressure is such a tiny force (average of 1-6 nanoPascals at 1AU, according to Wikipedia) that it won't have much of an effect on the operation of this engine. Furthermore, the amount of energy transferred would be the same as if it were a simple flat plate the same size as the cross-section of the engine.

2
Could chemical energy quicken ion propulsion?
3
Using interstellar medium as propellant for ion propulsion
23
Why are Ion Thrusters so energy hungry?
1
Why don't Ion thrusters use exothermic reactions directly to ionize the gas and Heat up the Plasma?
0
Could the interaction of the Sun’s solar wind and trapped plasma ions be used to propel a rocket through interplanetary space?
3
Could protons in the Sun's solar wind be used to create a photonic laser thruster for a spacecraft?
4
Capturing Hydrogen from the solar wind for Space Colony / Terraforming
2
Can I "tack" towards a laser beam from which I am powering my 100% efficient & massless ion engine?