Eccentricity has very little to do with launch windows in general, and the International Space Station's specifically. The ISS's orbit is very close to circular, with an eccentricity of 0.003 or less.

Two key factors determine when an instantaneous launch window occurs. One is the time at which the ISS's orbital plane crosses over the launch site, heading in the right direction. This occurs about once per day as the Earth rotates under the ISS's orbital plane. The other is when the ISS passes over the launch site. The launch vehicle needs to be launched slightly before or after this occurs, depending on phase loss during launch and phase gain while in transit to the ISS.

A vehicle with a non-instantaneous launch window needs to be able to make a plane change to put the vehicle on the same orbital plane as the ISS and needs to be able to accommodate the phase change due to launching a bit early / a bit late. The required plane change is typically performed very early in the launch sequence as even the slightest delay drastically increases propulsion expenditures. The vehicle launches toward what would be not quite the correct heading so as to meet the desired orbital plane and then turns to be at the right heading. The phase change is best handled by slightly changing phasing orbits. This is a bit difficult with trajectories that have no phasing orbits.

This chart shows the launch windows for shuttle mission STS-127 (a mission to the ISS) for a one-week period.

You can see the windows were 10 minutes long, not instantaneous. There was at least a flight day (FD) 4 rendezvous opportunity every day and most days had a FD 3 opportunity. The chart is a bit confusing because the Y axis is OMS 2 Phase Angle but you can read the GMT times of the windows off the chart itself. The window open times are approximately 24 hours apart but creeping up ~22 minutes each day for the FD 3 opportunities. 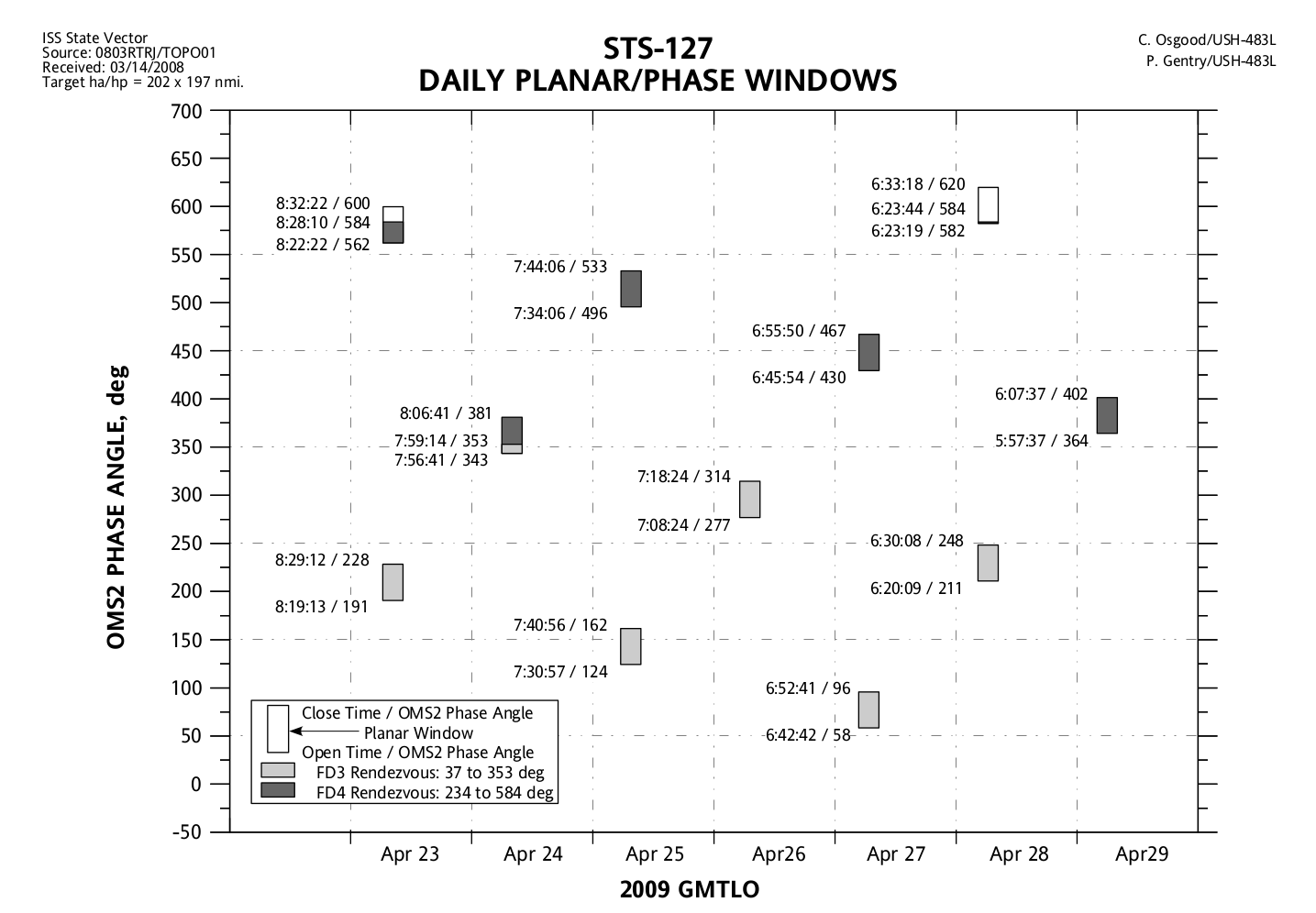 Chart is from the STS-127 Level A Groundrules and Constraints

Note: there is a good explanation of the Y axis in this answer

Not the answer you're looking for? Browse other questions tagged orbital-mechanics iss nasa roscosmos or ask your own question.

12
What decides if a launch has to be done instantaneously or during a window?
2
What exactly is “OMS2 Phase Angle”?

19
How much of an advantage do equator-proximal launch sites provide?
8
Gravity drag Delta-v calculation for launches to orbit
3
Could a rescue spacecraft be in an orbit with rendezvous windows for ordinary LEO, GTO or deep space launches?
5
Launch windows to Mars
2
Why does this site show Starman's position so far from what Horizons gives?
2
Are the proposed Launch UK facilities in the wrong places?
2
What exactly is “OMS2 Phase Angle”?