How do you determine (what is the formula?) the delta-V for a sub-orbital 'hop' from one location on the Moon to another? Is it different from a typical orbital calculation?

There was an earlier question about suborbital hops. I will reuse some of the diagrams and explanation from that answer.

In this particular Lambert Space triangle, both $r_1$ and $r_2$ would be the radius of the moon, 1738 km. The 3 points of the triangle would be moon's center and the departure and destination points on the lunar surface. $\theta$ would be the angle between the two points. 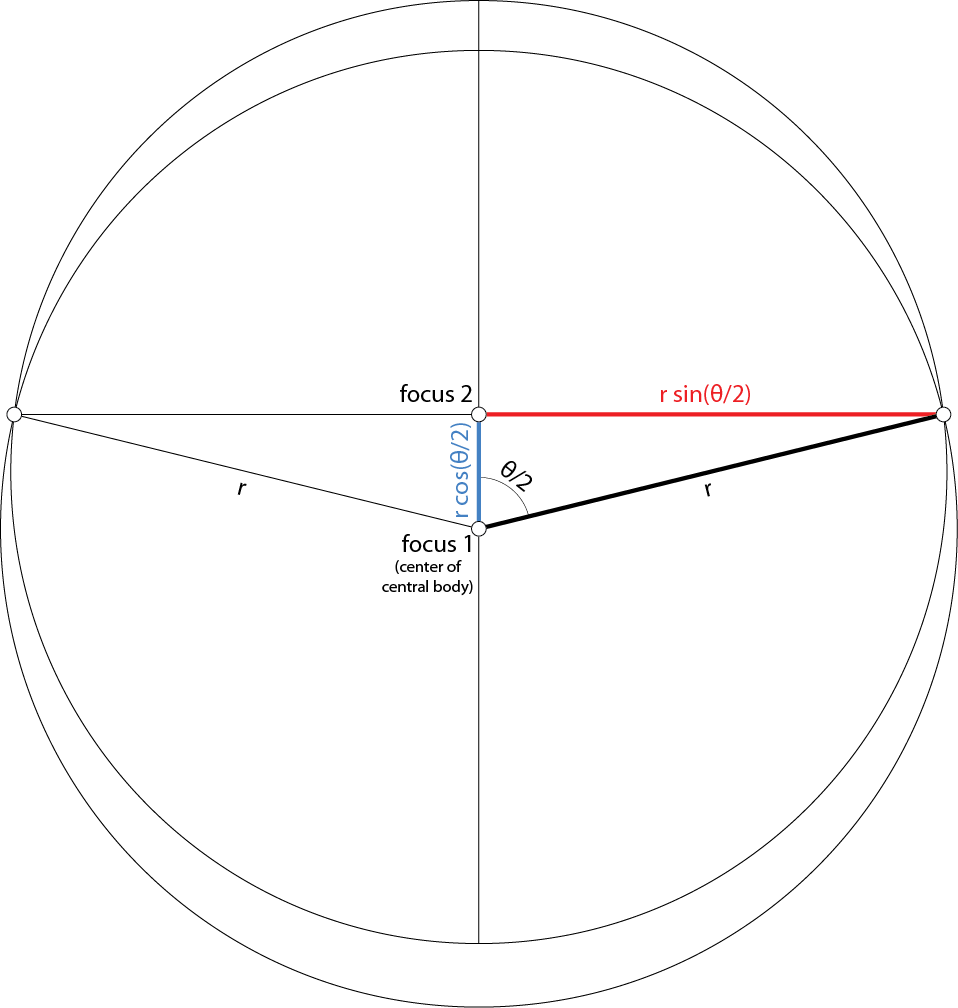 The second focus of this minimum energy ellipse would lie on the center of the chord connecting the points on the lunar surface.

Another useful piece of info is what angle you should depart from the moon's surface. If the destination is near, the angle will be close to $45^\circ$. As the angle between departure and destination approaches $180^\circ$, the flight path angle will approach $0^\circ$, that is, horizontal.

I made a spreadsheet for this. User can input data into the colored cells. I set it for Luna, but a user could also input mass and radius of other bodies, Ceres and Mercury for example.

In its simplest form it isn't different from any other type of orbital calculation. The only difference you may notice is that the perigee of the orbit may be within the surface of the moon. For a quick thought experiment, imagine drawing an ellipse onto a 2D picture of the moon. If you make this ellipse pretty small (and pretty circular) you can connect two close by points by drawing about half of the ellipse, starting at your take off and stopping at your landing point. As you go for a larger hop you draw more and more of the ellipse.

Things get a little more complicated when you take into account how you want to take off and land, but in essence it's just like any other type of orbit.

Not the answer you're looking for? Browse other questions tagged the-moon trajectory gravity sub-orbital ballistics or ask your own question.

5
How to calculate the delta-v necessary for a suborbital "transfer" of ice from Mars' pole to equator?

9
How to calculate apoapsis of sub-orbital trajectory?
20
How fast could a person run on the Moon?
4
What are the main synergies between sub-orbital and orbital space launch?
3
How did the JAXA lunar probe discover that there is a 50 km long cave on the Moon?
4
Question about orbital mechanics and trajectories for a space infrastructure project/climate adaption idea
1
How many hours long is Earth's longest possible sub-orbital flight?
1
How can I calculate the weight a aero-spacecraft occupant experiences during sub-orbital but non-ballistic trajectories?
3
Targeted Sub-Orbital Optimization Problem