What is this hovering "jet propulsion device" that "moves like a ufo"? [duplicate]

I encountered this reddit post, which is a video of a test of some sort of device hovering precisely in place & maneuvering using some slightly underexpanded reaction control system. I'm also assuming there's some reaction wheels aboard, as it yaws without me seeing any corresponding plumes.

This is actually fairly old technology developed during the Cold War. It is designed to be used to intercept incoming ICBM’s in space.

I find this very unlikely for multiple reasons:

What the heck is this thing? 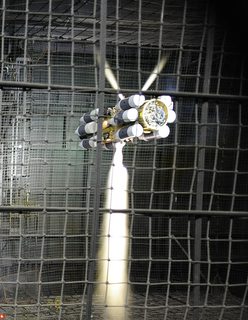 The MKV mission was to destroy medium-range through intercontinental-range ballistic missiles equipped with multiple warheads or countermeasures by using a single interceptor missile. During an actual hostile ballistic missile attack, the carrier vehicle with its cargo of small kill vehicles would have maneuvered into the path of an enemy missile. Using tracking data from the Ballistic Missile Defense System and its own seeker, the carrier vehicle would have dispensed and guided the kill vehicles to destroy any warheads or countermeasures.

14
Does this kill vehicle contains momentum wheels? Watch how it moves!

13
What are these air-vent-like structures on this satellite?
1
What is this tiny articulated dish antenna-like thing on Zvezda?
0
What are these thirteen purple grape-like things inside this tank?
4
What is this object outside the ISS that looks like a loudspeaker?
11
What is this balloon for in this clean room and what is the proper name for the "stand" that is holding the satellite?
4
What kind of "jet engine-like propulsion" does HyperSciences use to accelerate projectiles to sub-orbital altitudes?
6
How do you plot a porkchop plot like this one?
1
Exactly what was Surveyor 3 doing with a spring-loaded boxing glove-like device?
12
What is this device/object that the SpaceX astronauts are holding?
11
What is this propeller-like object on top of the SpaceX Hopper?