Challenger hypothetical - what if the SRB breach faced outboard?

Slightly different Challenger question - what could have happened if the SRB breach had faced outboard, away from any attachment fittings or the ET? Would the SRB have failed completely prior to separation (leading to a similar outcome)? Would it have caused significant guidance issues? Would they have had more time to execute some emergency maneuver?

Would abort to orbit have been possible?

I realize this is impossible to answer definitively, but I find myself curious as to what could have happened.

Do we get to pick our assumptions? I don't see how to answer this otherwise.

This plot shows the SRB chamber pressures starting to diverge which would cause the thrust mismatch to rise. (The certification limit for steady state flight thrust mismatch was only 85 klbf) You can pick your extrapolation of the curve here. I'm choosing to believe that it would continue to drop as the leak got bigger. 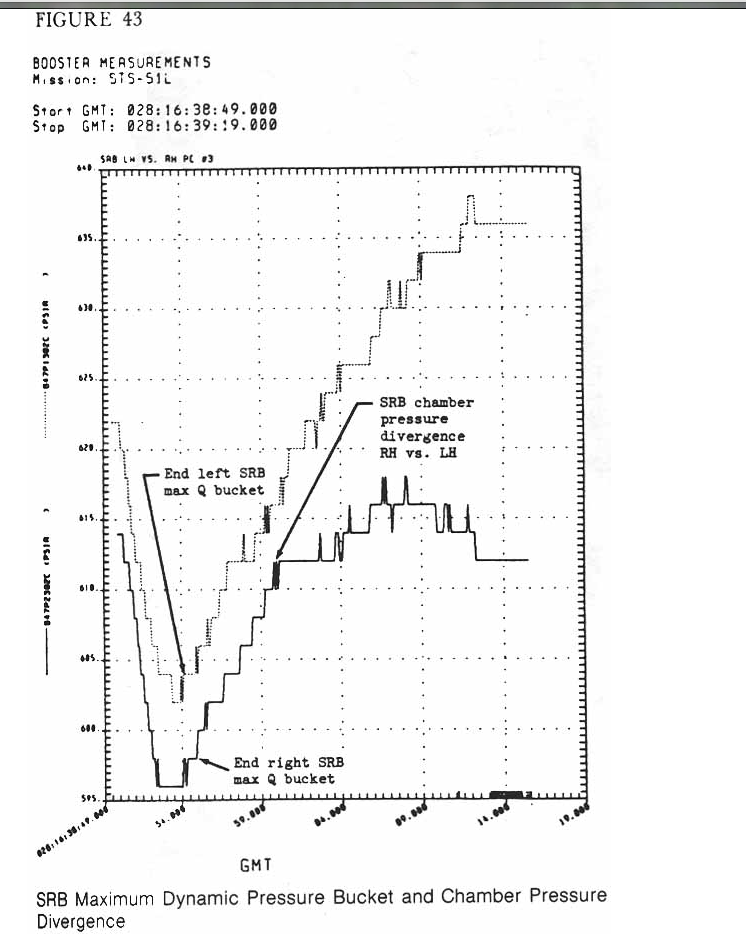 Given that, I would guess that vent force + thrust mismatch would overcome the vehicle control limits pretty quickly (gimbals hitting the hard stops) and it would have started to rotate uncontrollably with a result not much different from what actually happened.

The correct response to this question, is that it could not happen.

In Appendix C (https://history.nasa.gov/rogersrep/v1appc.htm) a failure mode is setout which ends with the statement:

"If the very tight tang-to-clevis assembly gap did persist to time of launch, it could have resulted in near maximum compression of the O-rings. Such compression, in conjunction with cold temperatures, joint dynamics, and the variable performance of the insulating putty has been shown to have detrimental influences on the joint's ability to seal."

It was 52 days between the stacking error of 12/7/86 and launch. In that time frame the joint would have been subject to movement to the pad, heating and cooling in the Florida sun and the natural tendency of a "tight" joint to move to it's lowest energy state. A flat on flat stack, if missed by the stacking team, would not "persist to time of launch" on any location on the joint where the clevis could move outward and change dimensions. Only if the flat on flat occurred very near the ET attach point, where the clevis would need to move the mass of the external tank to reduce the tight joint could a flat on flat persist to launch. Therefore, a flat on flat stack, which was a necessary part of the 51L failure mode, could only occur within 10 degrees of the ET attachment.

Like most accidents, the failure mode of STS-51L is not simply cold temperature (which was a constant across all O-ring locations) but a unique combination of factors which occur only once and at a single location and are wholly unanticipated.

14
Was a method available to save the Challenger Crew?
3
Could the SRB's have separated successfully at 70 seconds into flight

10
How could aerodynamic forces break up the Challenger orbiter?
19
What would have happened if only one Space Shuttle SRB ignited?
23
Could the shuttle's SRB alone reach orbit?
29
Challenger disaster: how full was the external tank at the time of destruction?
14
Was a method available to save the Challenger Crew?
4
Could Dick Scobee have flown a RTLS on Challenger 51L
6
What were the space shuttle’s emergency procedures for an SRB or ET separation failure?
18
Challenger Shuttle: could the crew have survived?
3
"Reading 486" air speed from Challenger disaster: What units?
4
What was the Lockheed design solution for the shuttle SRB field joint and how was it superior to the failure prone Morton Thiokol field joint?