Why would photon pressure be needed to keep ParkinsonSAT Spinning?

This answer to Can a satellite work like a radiometer? says (in part):

...the US Naval Academy cubesat ParkinsonSAT was designed with four faces asymmetrical, with solar panels offset to one side and reflective tape occupying the remaining space, creating an angular moment of solar radiation pressure, and this has succeeded in keeping the satellite spinning at a rate of several RPM for years.

Would it slow down and stop spinning without the torque due to offset radiation pressure? Instead wouldn't it just continue to spin up faster and faster?

There are four sources of attitude disturbance in Earth's orbit. Solar (photon) pressure, atmospheric drag, gravity gradient and interaction with geomagnetic field. Let's examine possible effects on the ParkinsonSat from each one.

Solar pressure with the given satellite design has the tendency to keep increasing the angular velocity and it could possibly reach the limit where centrifugal forces tear the satellite apart. One caveat is that for the spin around desired axis of minimal principal moment of inertia, it must not already have a significant spin around the axis of maximal principal moment of inertia. Rotations are stable for both of this axes and it is hard to change the axis of rotation without first slowing down. Additionally, when rotation is around a non desired axis, the solar pressure will alternatively provide opposite torques depending on the side which is in the sunlight. Figure below shows angular velocity from a simulation of a ParkinsonSat with only solar pressure, neglecting orbit and eclipses. 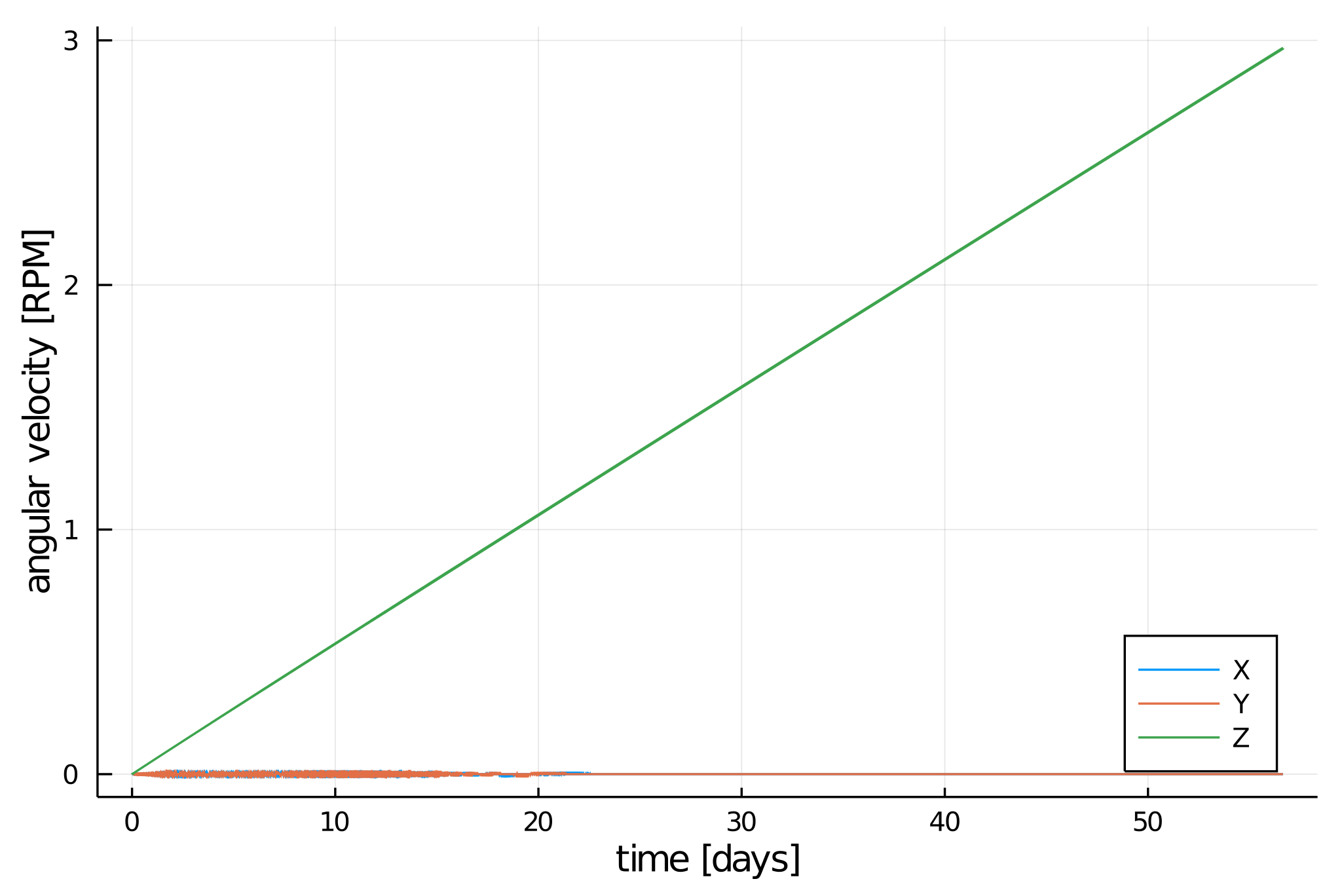 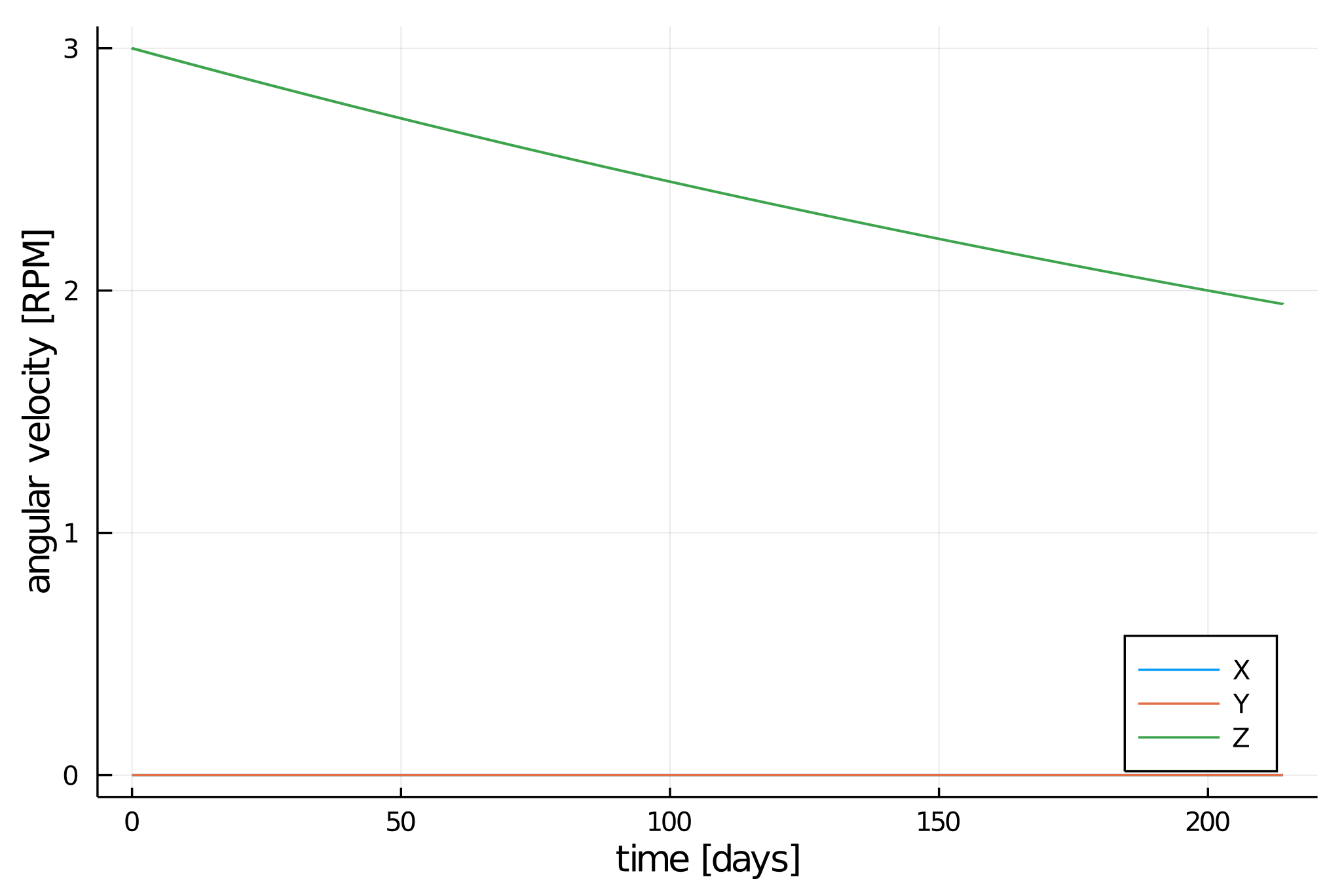 Gravity gradient can only convert any available potential energy, due to the satellite's orientation, into kinetic and thus alter the angular velocity. Amount of angular momentum here is limited and often will be quite small, especially on a CubeSat like ParkinsonSat. At best, slight attitude oscillation can be expected from this effect, which is not of interest for this question.

Interaction with the Earth's geomagnetic field is complicated to account for as it varies with the orbit and the position in the orbit. ParkinsonSat did not use magnetic actuators to reach its spin state and this attitude disturbance source can will be at first ignored. 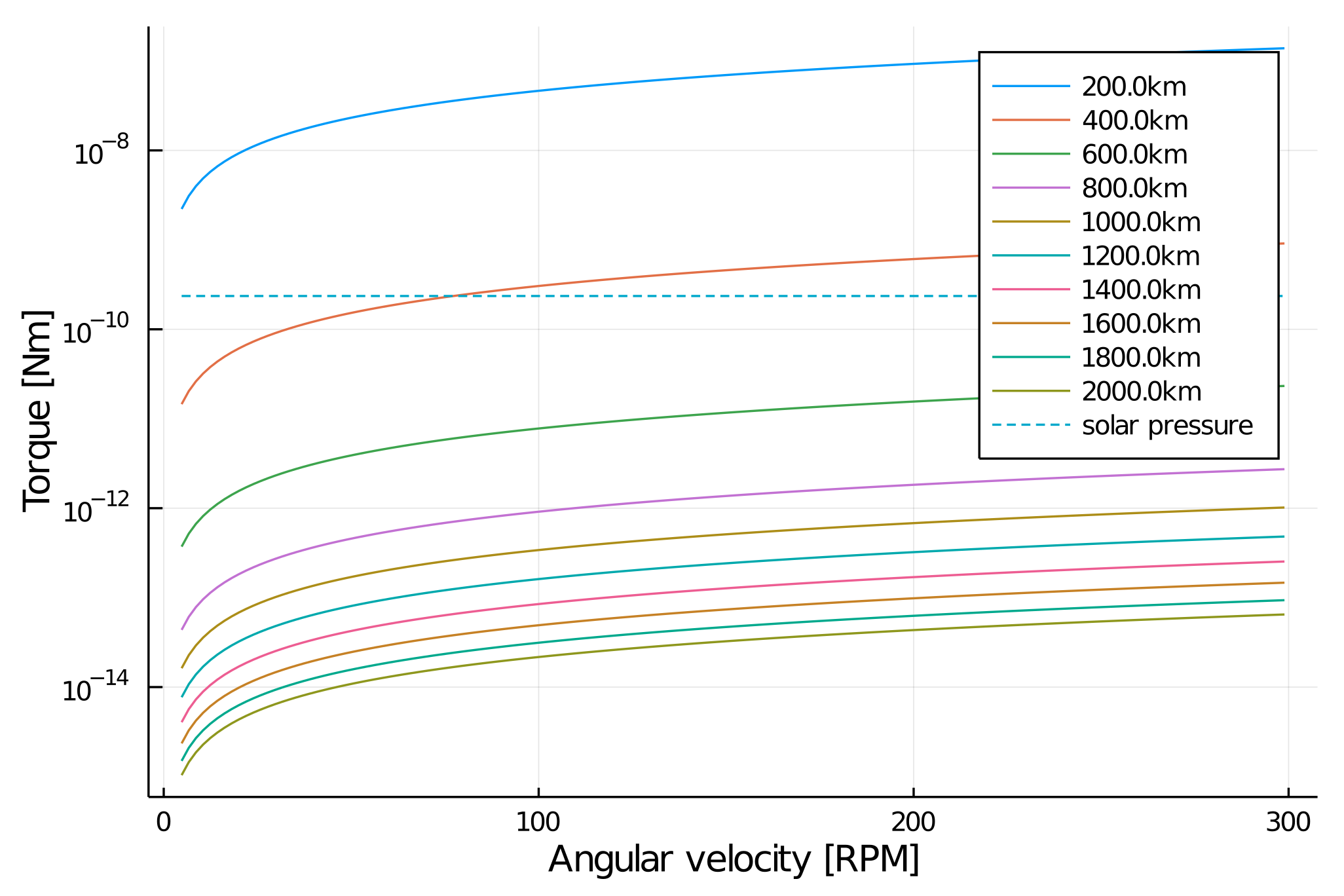 With the orbital period of 95 minutes, the altitude is about 400 km and terminal velocity should be reached at around 80 RPM. However, this analysis is done without much knowledge of the ParkinsonSat, I had to estimate a whole lot from the available pictures. Still, I would expect that this is precise within 20% error margins.

Few conclusions given this analysis:

ParkinsonSAT is in low Earth orbit, where there is still enough atmosphere that un-powered satellites will lose speed and de-orbit in less than a decade. Given there is a (very thin) atmosphere, the leading edges of the spinning satellite will be hit with more force by atmospheric particles than trailing edges, so net force will slow down any rotation over time.

Not the answer you're looking for? Browse other questions tagged cubesat attitude-determination-and-control solar-sail spin-stabilisation torque or ask your own question.

11
Can a satellite work like a radiometer?
1
What is the fastest that ParkinsonSat spun? Did it vary with solar activity?

0
Why are two frames of reference needed for attitude determination?
3
Why are some reaction wheels sealed with low pressure gas, others with vacuum?
7
Why would the future Nanoracks airlock be built so that it must be removed from the ISS to deploy cubesats?
8
Why does spinning help stabilisation?
7
Negative photon pressure? What is the physics behind this expression?
13
What is the principle behind Mariner 4's "Solar Pressure Vanes"? In what case(s) would they be effective?
3
How will JWST manage solar pressure effects to maintain attitude and station keep it's unstable orbit?
1
Why did my vis-viva math solution get so close despite being wrong? Under what conditions would it have been a good approximation?