Did Skylab report different results on impact of zero g on humans?

We know that prolonged zero gravity is bad for human health; bone demineralisation and the like. However, Skylab was big enough for astronauts to run around the internal wall.

Was the "artificial gravity" experienced sufficient to reduce the experienced health problems?

The Skylab crew exercised using a bicycle ergometer, not by running around the ring of storage lockers. 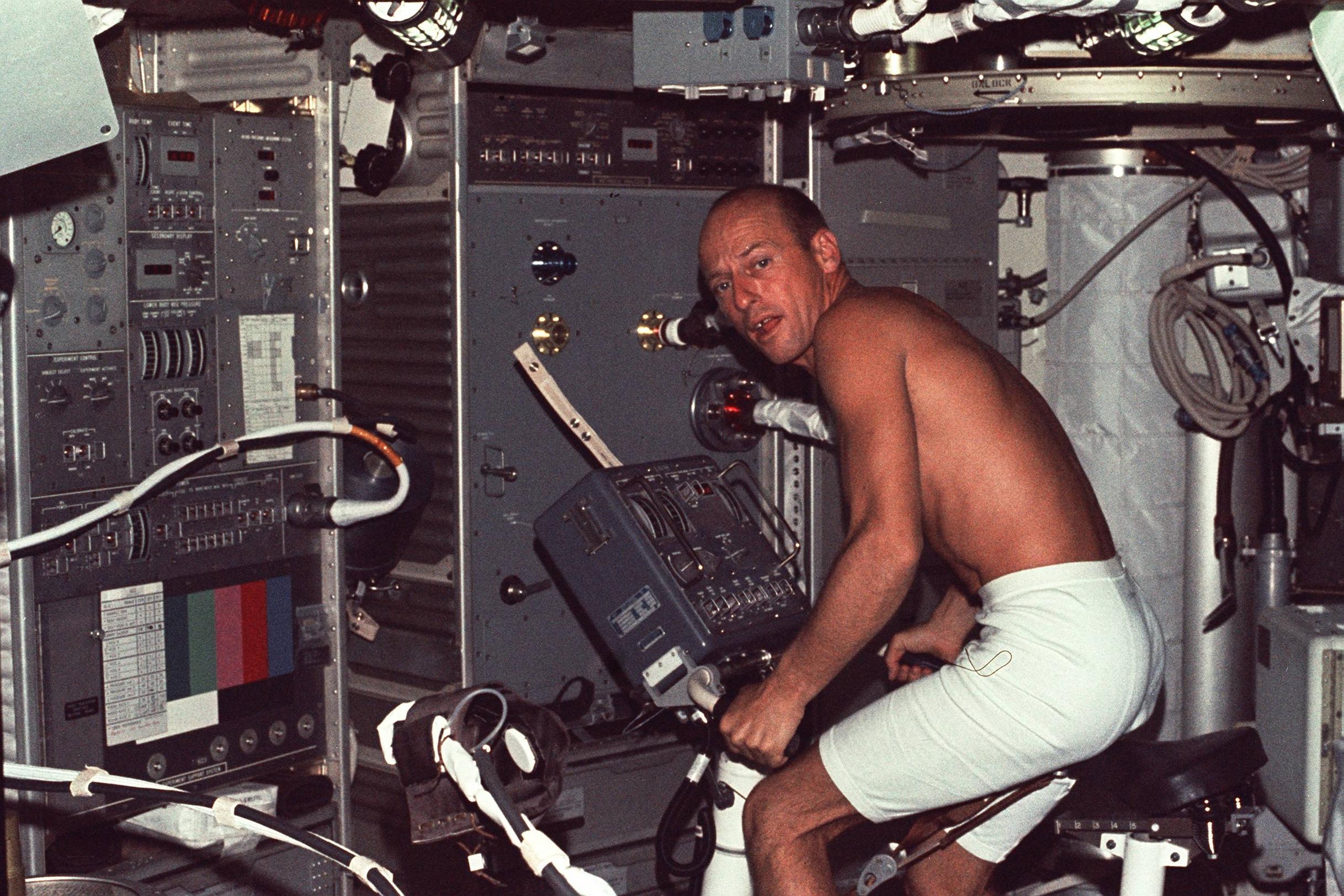 Per the answer to this question Did NASA tell the Skylab astronauts to "Stop running around!"? the crew was directed to not run around the ring of storage lockers any more.

They experienced the usual loss of bone minerals.

The mineral balance study, while imperfect, showed a clear trend. In space, all crewmen excreted more calcium in their urine, along with a high level of hydroxyproline, an amino acid whose loss is associated with metabolic turnover of bone. This confirmed what had been found during Gemini and indicated a loss of structural material in weight-bearing bones that are subjected to compressive loads in normal gravity. Pre- and postflight x-rays of heel and wrist bones corroborated the mineral balance study. In spite of the third crew's increased exercise, loss of calcium and nitrogen-the latter indicating a loss of muscle mass- continued throughout the mission. The actual amount of bone mineral lost, even after 84 days, was not serious; but that depletion continued unabated implied that longer missions entailed risk. Comparison of the Skylab results with studies on bedridden patients-the nearest one-g analog-indicated the possibility of irreversible damage to leg bones on missions lasting a year or more. Another hazard was kidney stones formed as a result of high concentrations of calcium in the urine.

Living and Working in Space, A History of Skylab p. 341 (emphasis mine)

Short answer: No, for several reasons.

I'm going to plug in some educated guesswork figures here, I don't expect them to be exact but they should be good enough. Velocity is a tough one, but from my memories of the videos the it seems to be a slow running pace, kind of a jog, so I'm going to say it's 3m/s. I have no figures on the ring the astronauts ran on, the outer diameter was about 7 meters, so I'm going to say 6 meters, or 3 meters radius. Plugging that into the formula I get 3m/s2. That's less than 1/3 earth gravity. Remember this is not exact, but an estimate, the real figure could be more or less.

While that is a significant acceleration it seems to have been more of a curiosity than a serious form of exercise, so their exposure to it was only a few minutes over the mission. Although we have very limited knowledge on the effects of low gravity on the human body it's very unlikely it would have been measurable.

Lastly, there was nothing to compare to. Skylab was the first US space station, and the first time the US astronauts could spend extended time in space where there was room to move around, before they were in small capsules with limited exercise opportunities. Skylab had a gym which the astronauts used, so differences in bone density would be attributable to exercise.

Not the answer you're looking for? Browse other questions tagged health skylab or ask your own question.

13
Did NASA tell the Skylab astronauts to "Stop running around!"?
4
Does extended microgravity increase the rate of kidney stones in astronauts? Do these lead to medical complains/discomfort while still in space?

9
How serious is a contagion in space flight?
5
Isometrics in zero gravity
7
How might artificial gravity experiments be conducted to determine adaptation in mice?
1
How would travel to Mars without artificial gravity affect a crew's initial experience in Mars gravity?
3
How many times would two astronauts have to run around Skylab to turn it by 10 arc minutes?
2
Roughly what fractions of the time did Skylab spend in Earth-oriented and Sun-oriented attitudes?
7
How will SpaceX's Starship accommodate its 100 passengers from the effects of micro-gravity?
53
Is the Skylab 4 mutiny just a myth?
6
Are there active proposals for the next large space station (post-ISS) to use artificial gravity?