How much liquid oxygen is lost during a Space-X Crew Dragon launch abort?

The tanks of the Space-X rocket should be emptied after a launch abort. I assume the liquid oxygen is pumped back to the storage tanks at the launch pad.

But how much oxygen is lost by evaporation?

Is the loss replaced by tanker trucks or by a liquid oxygen plant near the launch site?

Calculating how much LOX is lost is going to be an interesting calculation, but I'm not sure we have the data for that. Instead, I'll be focussing on the other part of your question:

Is the loss replaced by tanker trucks or by a liquid oxygen plant near the launch site?

The ball-shaped structures near pad 39A are storage tanks for liquid propellants. It's pumped from there to the pad by pumps capable of pumping 1300 gallons per minute. I imagine the loss per minute would be substantially less than that.

Overview: Liquid oxygen used as an oxidizer by the orbiter main engines is stored in a 900,000-gallon tank on the pad's northwest corner, while the liquid hydrogen used as a fuel is kept in an 850,000-gallon tank on the northeast corner. The propellants are transferred from the storage tanks in vacuum-jacketed lines that feed into the orbiter and external tank via the tail service masts on the mobile launcher platform.

No tanker trucks are required to refill the loss by evaporation, directly. Naturally, something has to refill the storage spheres eventually and this is done by truck (thanks Organic Marble).

For more on LOX consumption, see this answer. 1kg of LOX is roughly 0,23 Gallon.

A picture of KSC LC-39A with Crew Dragon Demo-2 and highlighted ball-shaped storage tank (one of the cryogenic liquid propellants tanks): 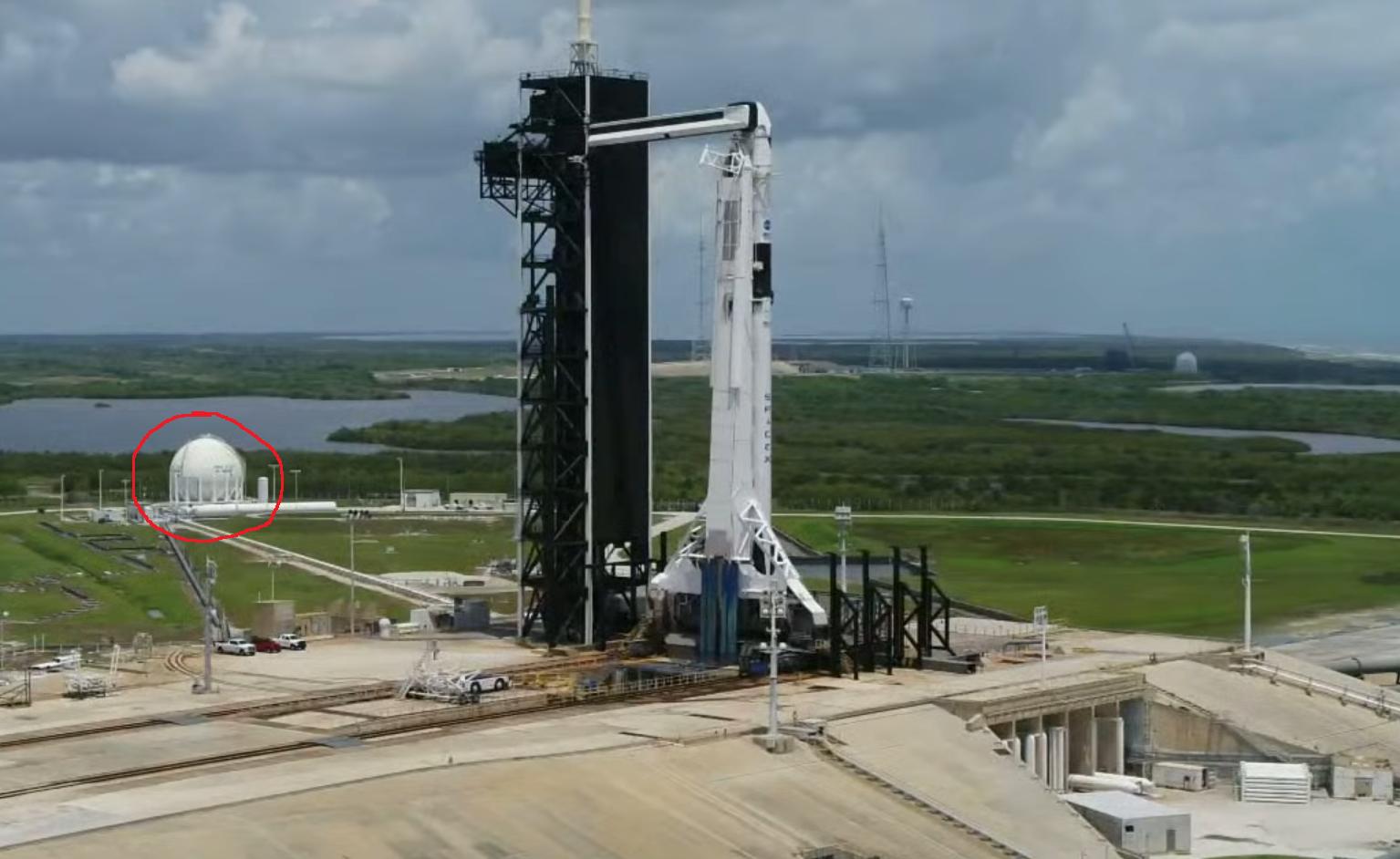 Not the answer you're looking for? Browse other questions tagged spacex launch lox or ask your own question.

6
Why would sub-cooled LOX tanks need to "topped-off" until the last minute or so?
10
How much fuel does the Falcon Heavy use? What is the price RP-1?
6
Apollo/Shuttle launch site fuel handling
2
How much LOX is vented / wasted while loading?

7
Move landed rocket stage back to launch pad
2
What is all the stuff that goes flying during a launch?
6
Apollo/Shuttle launch site fuel handling
15
How often are space launches substantially delayed by protests physically at the launch site?
7
How do they know how much liquid propellant is in a rocket just before launch?
11
After Crew Dragon launch abort, was Falcon 9's detonation intentional?