How much time did the longest maneuver last?

For this question, "maneuver" will designate any maneuver involving a change in $\Delta V$ (either direction, intensity, or both). The maneuver implying rotation only (such as the one the Hubble space telescope perform thanks to its reaction wheels) does not count.

The question arise when I was playing to KSP waiting for a high $\Delta V$ maneuver performe with a low thrust to weight ratio spacecraft to end.

Electric propulsion can offer higher ISP but with low thrust. Thus, to perform a maneuver with a specified $\Delta V$, an electric thruster must be running longer than a chemical one. I'm confident this is not a big issue for unmanned spacecraft traveling in the outer solar system.

I fail to find how much time such an engine can run continuously. Yet, such value is a valid on a test-bed or in theory and does not necessarily reflect values used in real flights.

What is the longest maneuver ever performed? What kind of engines (and possibly RCS) did they used for this maneuver? Did those engines run a max thrust? How much time did this maneuver last?

bonus question: what was the $\Delta V$?

What is the longest maneuver ever performed? How much time did this maneuver last?

I can't find the duration of the longest single burn of the Dawn mission, but it seems to be at least a month.

On its initial journey to Vesta, Dawn's would thrust for periods of about a week at a time, stopping for a few hours in between to turn to point the spacecraft's antenna to Earth. On the later Vesta-to-Ceres leg of the mission, however, "eleven thrusting segments averaging 657 hours in duration were used in the second year of cruise to Ceres."

That is, the average burns were over 27 days long during this period of the mission. The ∆v imparted per 27-day burn would be around 150 m/s.

They performed longer burns and less frequent reorientations in order to conserve RCS propellant needed for science operations at Ceres.

What kind of engines (and possibly RCS) did they used for this maneuver? Did those engines run a max thrust?

Dawn's engines are NSTAR ion thrusters with a maximum thrust of around 90 mN; Dawn carried three for redundancy but only fired one at a time. The thrusters became power-limited as Dawn got farther from the sun and its solar arrays delivered less power, stepping down as low as 50mN.

Dawn also used hydrazine RCS thrusters for attitude control and to do orbital insertions at Ceres and Vesta.

I fail to find how much time such an engine can run continuously.

In a test in a vacuum chamber on Earth, the same type of ion thruster fired continuously for 5.5 years. Dawn's burns were interrupted because of the need to reorient the spacecraft, not because of limitations of the thrusters themselves.

Deep Space 1 would be the other contender, which used a similar ion thruster to Dawn's.

The GOCE satellite mission (Gravity Field and Steady-State Ocean Circulation Explorer) lasted 55 months (4.6 years) of largely continuous thrust as drag compensation in LEO. The mission ran from 2009 to 2013 and operated at various altitudes of the order of 250km that would otherwise have been unstable orbits were it not for the electric propulsion.

The satellite used the T5 kaufman type gridded ion thruster up to 25mN thrust. Individual manoeuvres are understood to be measured in whole years at a time.

The thrust level was modulated via a unique dynamic control system to compensate for variable atmospheric drag. 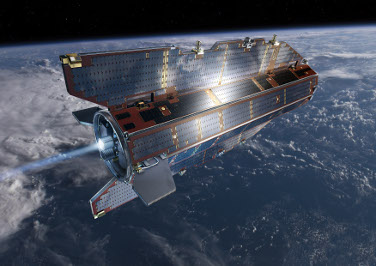 Not the answer you're looking for? Browse other questions tagged engines record or ask your own question.

6
How many ion thrusters would be needed to accelerate a 1000 tonne craft at 9.8m/s²?
11
Longest continuous burning chemical rocket engine?

6
Was the notion of using an air-started SSME on Ares-1 a reasonable idea?
7
Would reusability affect the performance of a rocket engine compared to a single launch version of that rocket engine
11
Longest continuous burning chemical rocket engine?
3
What's the longest time that an astronaut remained in free fall?
3
Are there any rocket engines in current or former use that aren’t normally restarted in flight, but have the capability for an emergency restart?
2
Would a nuclear turbojet with a chemical afterburner be a suitable intermediate between a pure nuclear turbojet and a nuclear thermal rocket?
2
What probe has the shortest/longest operational surface time (non-Earth)?
5
Why were later Russian engines inferior to the NK-33?
3
Rocket engine with lowest Isp to reach orbit
6
Solid state thrust vectoring