How was Demo-2's Falcon 9 booster different from any other F9?

According to The Sum Of All Knowledge, the Falcon 9 has only twice (including the 2016 ground fire destroying the payload) failed to put the primary payload in orbit.

Thus, the May 30 2020 Demo-2 launch seemed pretty boring/routine. Was there something special about the rocket (not the payload; just the launcher)?

There was no significant difference between the Falcon 9 booster (first stage B1058, on its first flight, as it happened) used for Demo-2 and other Block 5 Falcons.

The excitement was entirely due to the fact of it having a crewed payload, the first NASA astronauts to launch on a US rocket on US soil since 2011.

While Falcon 9 is shaping up to be a quite reliable launcher, no rocket launch is anything like perfectly safe; the stakes for the May 30 launch were higher than usual, and given the way the year is going, many people were braced for some kind of disaster to occur. For those people, there was a significant sense of relief after the first stage and second stage phases of the ascent completed. This sense was particularly acute for people of my age cohort, who were school-aged when the Challenger accident occurred in 1986; many of my friends commented on the tension they felt watching this launch.

There were a number of minor upgrades that had to happen, primarily to allow for automatic flight failure detection to allow the abort system to activate. These fly on every flight now, but they didn't in the past. Past systems have included a wire that runs the length of the booster to detect if there is a fault, and there is almost certainly some software upgrades to detect issues, although I haven't been able to find the specific changes.

The biggest difference is not so much the booster, but the flight profile. In order to get humans to the ground safely in the event of an abort, a shallow trajectory is required. This results in a less fuel efficient trajectory, most noted by the booster having to land on a barge, while they could have launched the spacecraft in to a less abort friendly orbit and returned to the launch site. You can see the difference between a cargo dragon and a crew dragon at this site. 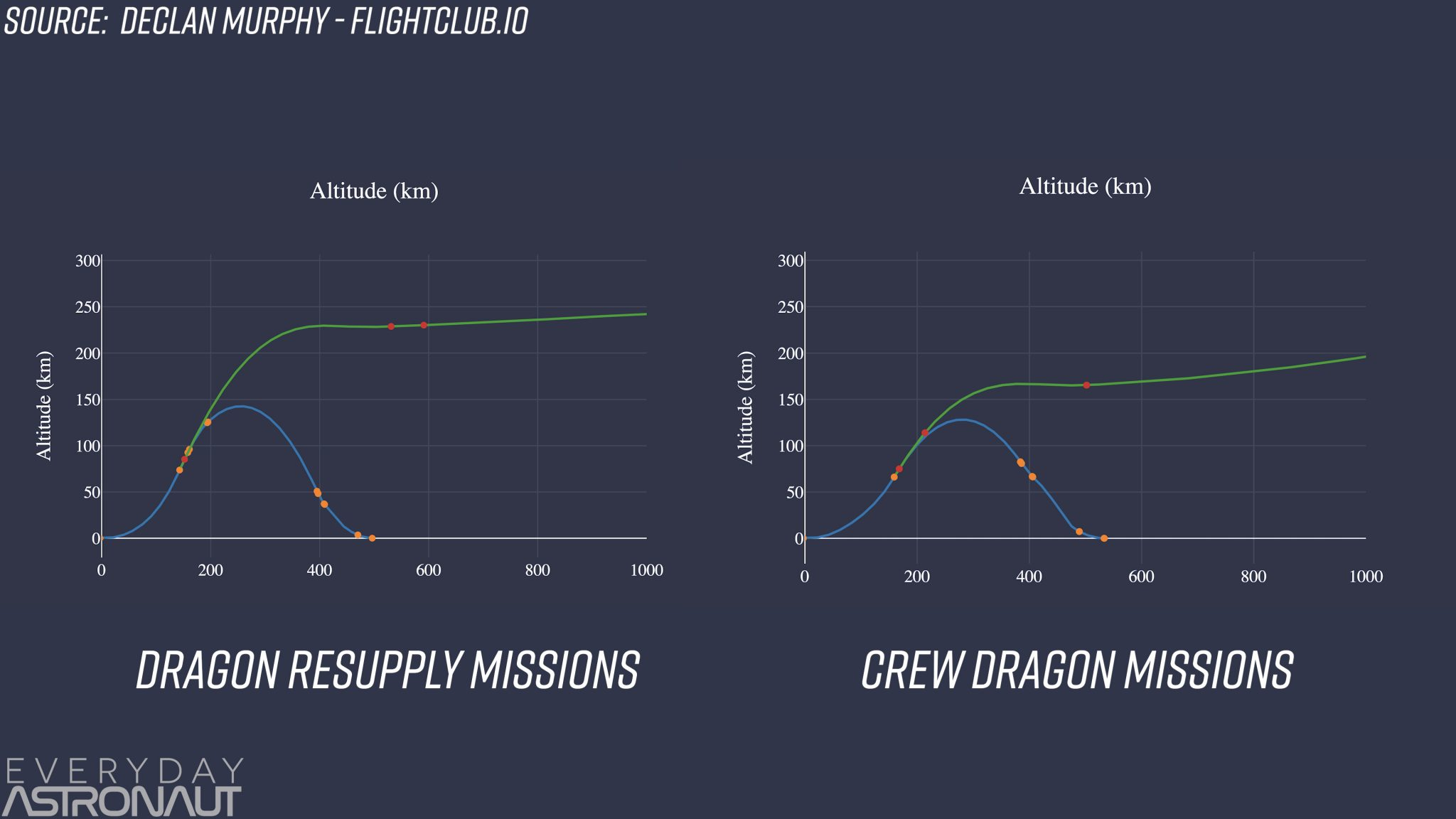 Not the answer you're looking for? Browse other questions tagged spacex rockets falcon-9 or ask your own question.

3
Falcon 9 1.1 demo flight (flight 6) - Was the second stage burn meant to test deorbit?
11
What is the planned date for the Falcon Heavy Demo launch from Vandenberg AFB?
13
Why are rocket mass on the launch pad and payload mass to LEO not strongly correlated?
10
How does a Falcon 9 booster know how far away the ground is?
8
How vulnerable could space launch vehicles be to a “lone gunman”?
5
How much fuel can Falcon 9's upper stage bring to orbit, without any other payload?
19
Was the side booster footage from the same camera during the Falcon Heavy test flight stream?
15
Why do we need dedicated launch vehicles for small satellites?
24
What actually is RP-1, and how is it different from any other hydrocarbon liquid fuel?