Why is the flame of the Falcon 9's 2nd stage (nearly) invisible?

During the first crewed flight of a Falcon 9 today, I watched the nozzle go from dark grey to glowing red hot, confirming that it was burning. Yet there were no visible flames. I understand this stage uses LOX / RP-1 for propellant, which is usually quite a show.

Why were no flames visible? I've attached a picture that I believe was from while the engine was about mid-burn. I can't verify that the picture is of the right time, but it looked like this through most of the burn today. 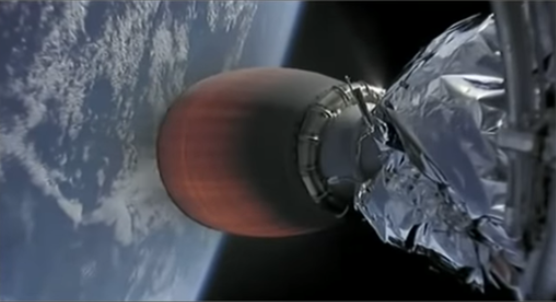 The Merlin engine used by the Falcon 9 burns a fuel-rich RP-1/LOX mixture, like most other rocket engines. That means the exhaust coming from the engine contains unburnt fuel, mostly in the form of soot. You can see that in your picture: There is a dark exhaust.

At sea level the excess fuel/soot burns off with atmospheric oxygen, leaving a flame trail behind the rocket, which you can nicely see after liftoff. But the higher the rocket flies, the less oxygen there is, the less visible the flame gets.

Now, the second stage operates in (near) vacuum, where no oxygen is, so the soot cannot burn at all, thus there is no flame.

If you would see a flame in the vacuum of space, that would mean that not all fuel/oxygen is burnt inside the engine, implying that the engine is not as efficient as it could be, since fuel burning behind the rocket does not provide any thrust.

Under fuel rich conditions, kerosene/RP-1 forms soot readily. This is because Naphthene and aromatic hydrocarbons form soot rapidly (condenstaion-polymerization) by directly condensing themselves into polycyclic aromatic hydrocarbons (PAH). On the other hand, paraffins form soot slowly. This is because paraffins have to be break up into smaller fragments first, from which fusing of the fragments occurs to form naphthenes and aromatics, and PAH's form eventually and indirectly (fragmentation-polymerization). 8,9 These PAH's, also known as soot precursors, are then undergone a series of physical processes to form coagulated soot panicles. Frenklach et al.20 developed a comprehensive soot formation mechanism in which 180 species and 619 elementary reactions are used in an attempt to describe the aforementioned soot formation processes. However, at the present moment, it is far too expensive to be incorporated into a CFD code while the oxidation of those 180 species was not even considered... 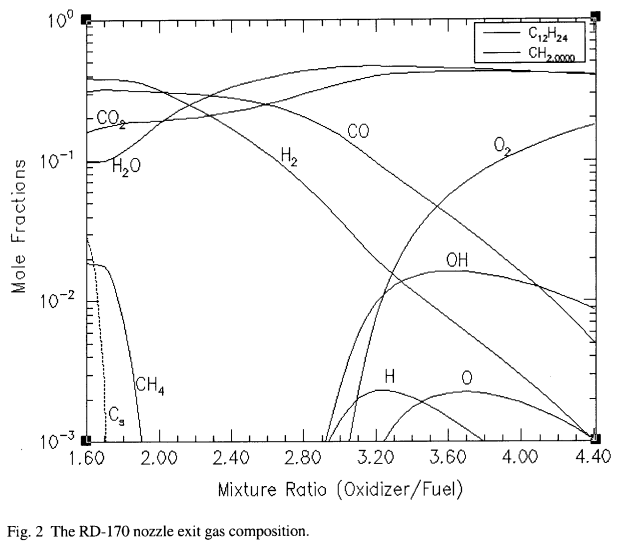 Not the answer you're looking for? Browse other questions tagged falcon-9 upper-stage or ask your own question.

33
Why do the exhaust flames from cryogenic stage engines appear to be separated from the nozzle?
16
Are rocket exhaust flames ever opaque?
18
How did the kerosene-burning Black Arrow have transparent exhaust? (seems to just "hover" in photos)
9
Is it possible to create different colors in rocket exhaust?
11
Merlin engine stoichiometry
6
Pro/cons of burning propellant in stochiometric ratio?
10
How do rocket propellant combinations rank in terms of "brightness"?
6
Which is the preferred mode of liquid rocket engine cutoff - fuel lean cutoff or fuel rich cutoff?
5
Why is rocket engine flame usually clear/transparent at the nozzle?
2
Can Pyroxene and other silicon compound be used as a theoretical spacecraft fuel?
See more linked questions

18
Where is the other half (stage two) of the SpaceX Falcon 9 rocket?
9
Why rotate the Falcon 9 2nd stage after deployment?
3
Why is the Falcon 9 upper stage tumbling so much after separation? (SES-10)
13
Why does the 2nd stage of Falcon 9 need compressed He tanks?
5
Falcon 9 2nd stage pusher; how far does it continue to extend as it accelerates separation?
3
When Falcon 9's stage 2 engine fires up, does the flame of the engine affect stage 1 in any way?
1
Main reasons for a 2nd burn of a 2nd stage in Earth orbit?
4
How does the Falcon 9 upper stage settle its propellants?