I know that pump power can be calculated using this formula

How can we plot the performance curves if we know all these parameters given in the formula?

Also, how would performance curved changes if the number of RPMs increases? is there any other formula through which we can calculate pump power that relates power with RPMs?

The data given is just flow rate, density of propellant, pump efficiency, head and RPM.

How can I plot pump performance curves and then how would changing the RPM from 5000 to 10000 affect the curves?

Now, let's tackle your questions one by one.

Pump performance is usually plotted as Differential Head Vs. Flow at a specific RPM for specific inlet and outlet diameters. I assume the later would be given when you choose a specific pump. You would plot the performance curve after deciding which RPM you want it for. It looks something like this (presented in imperial units) - 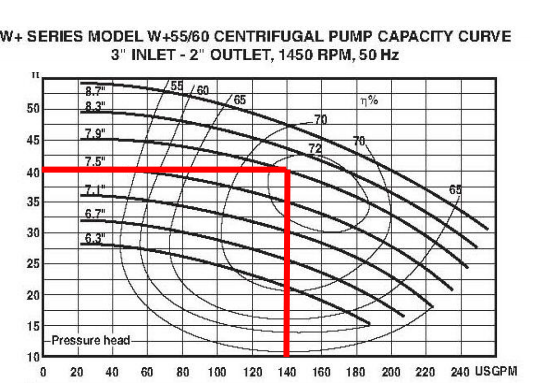 Read it like this (for red lines) - For an impeller size of 7.9inch (variable) and the pumping rate of 140 gallons per minute ($Q$; given), you need 40ft of differential head ($\Delta H$). The area enclosed by faint lines which are intersecting the bold lines (impeller size) represents the efficiency of the operating pump (also given).

Now, corresponding to this Head Vs. Flow performance curve, there is a Power consumption Vs. Flow curve which looks like this (you can substitute imperial units with metric) - 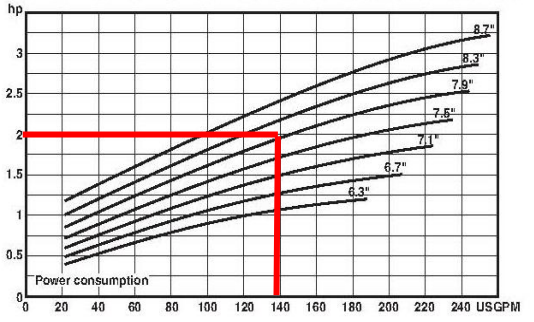 For plotting the performance curve, you would have to keep one of those specified physical quantities as a variable like take an impeller of specified size, fix the power, and vary the head to determine the flow rate. As you can see this is highly tedious, hence the performance curve is given by the manufacturer when you buy a pump.

Subscript 2 means the values are at the impeller exit.

So for calculating the power, first you need to have an impeller size fixed with vane height, vane blockage, and blade angle (forward curved/backward curved/radial). Then after determining the power at a specific RPM and keeping it constant, you vary the head and determine the flow rate and subsequently plot the performance curve (as done in part 1).

Evidently, the relation is not that straight forward and the performance curve is a convoluted function of RPM but if you are ready to take the pain, this is the way to go. Hope this helps!

15
Why do pump and pressure fed liquid engines need to operate at high pressures?
1
General queries on pumps
1
Pressure queries on turbopumps
3
What is advantage of independent pumps vs common pump in clustered configuration?
1
What differences exist between the pressurants and their associated systems between a pressure fed and pump fed liquid rocket engine
5
How do pressure fed and pump fed systems compare at different scale of rockets
4
Does engine purging cause dry run of turbo pump in a liquid rocket engine? If it occurs, what is the implication?
0
using Tesla turbines to pump rocket fuel
0
Difference between 2 pumps on same shaft run by a turbo pump and 2 pumps run on separate turbopumps
1
Would pressure oscillations at the inlet of a liquid engine turbo-pump subside at the outlet, or would they get amplified?