What were the space shuttle’s emergency procedures for an SRB or ET separation failure?

The space shuttle, like most launch vehicles, was a multistage vehicle (albeit one where the various stages were mostly stuck to the sides of each other rather than being stacked vertically), reducing the amount of mass and weight needing to be carried all the way into orbit:

Although the SRBs and ET separated properly every time they were required to do so throughout the duration of the shuttle fleet’s entire service life, failures-to-stage (both with side-mounted strap-ons and with vertically-stacked core stages) have occurred many times with expendable launchers,1 and there is no reason to assume that they couldn’t have happened with the shuttles; yet, the space shuttle flightcrew operations manual contains no information on what to expect or what actions to take in the event of an SRB or ET separation failure, not even in its otherwise-extremely-comprehensive “Emergency Procedures” section.

Given that the shuttle stack would already have been very high in the atmosphere by the time of SRB burnout, and would have been well and truly in space by the time ET jettison was commanded, the aerodynamic forces on the vehicle stack would have been low to negligible even with a retained SRB(s) or ET, and, thus, I’m assuming that an SRB or ET separation failure would not have led to an immediate loss of control. The main effect of a separation failure would, presumably, have been the weight and mass penalty of the non-separated components:

What were the procedures, if any, for responding to an SRB or ET separation failure?

1: Including on at least one manned mission.

2: Pressing uphill to some kind of orbit (even a low one), and then either waiting for rescue or attempting an emergency EVA to manually free the orbiter from the ET, would pretty much have been the only even-potentially-survivable option for an ET separation failure, as reentering with the ET still attached would have (not necessarily in this order):3

All of these would probably have been bad.

3 As a result, if (say) the ET were to fail to separate during a TAL, the astronauts would basically be screwed. 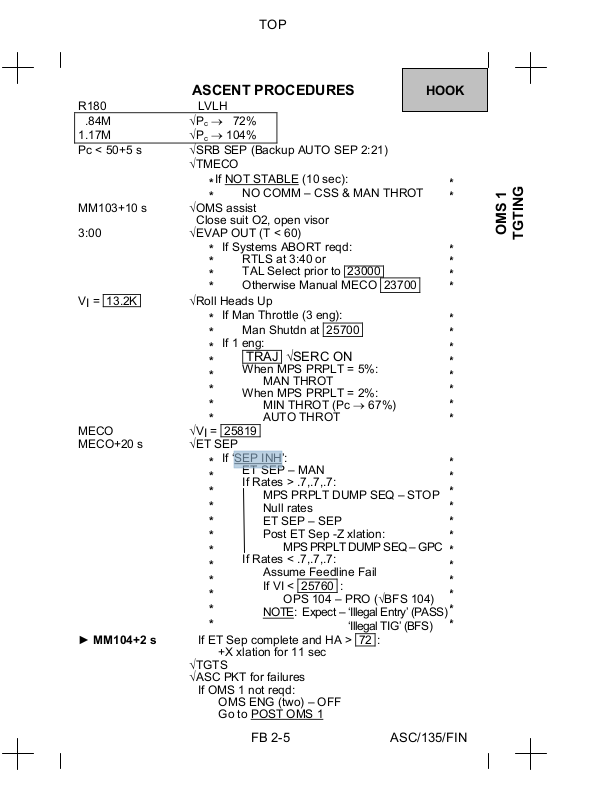 There were no procedures for failed SRB separation, and nothing the crew or ground could do about it. 1

The ET separation sequence2 could be halted by either excessive vehicle rotation rates, or by failure of the shutoff valves in the main propulsion system feedlines to close (or indicate closed). The crew would be informed of this by a ET SEP INH message.

Refering to the procedure, we see that the crew would check that the tank was in fact still attached, and then take the ET SEP switch to manual.

If the rotation rates were high, they would stop the Main Propulsion System dump (in case it was causing the rates), null the rates, then press the ET SEP manual pushbutton. After the vehicle maneuvered away from the tank, the crew would restart the dump.

If the rates were nominal, they are directed to assume that the failure is due to to a valve problem. This involves simply waiting a while to allow the tank to blow down, then manually separating the tank in the Post OMS 1 timeframe. See the ET PHOTO MANEUVER/MPS DUMP actions in the checklist there. The reference to VI < 25760 is asking if the OMS-1 burn is going to be required due to an underspeed at Main Engine Cutoff; if this is the case, it's handled on page 2-8 in the OMS 1 BURN procedures and just involves waiting as long as you can before you must start the burn.

For RTLS and TAL the ET sep's were not inhibited.

There was one other malfunction procedure related to ET sep. Certain combinations of failures could prevent the flight software from being able to determine the position of the ET SEP switch. If this happened on a non-RTLS ascent, the software would assume that the switch was in MAN. (On an RTLS, the sofware assumed it was in AUTO so that the sequence would go ahead). The crew would get a message ET SEP MAN and after Main Engine Cutoff, would override the position of the switch in the software by making entries on a flight software screen. (Ascent/Entry Systems Procedures)

1 I remember fixing a problem in the Shuttle Mission Simulator Master Events Controller (MEC) model where some enthusiastic malfunction entries + the coding error prevented the MEC from firing enough pyros to separate the SRBs. I don't remember the details of the resulting trajectory but I'm pretty sure "they did not go to space that day". That's a lot of dead weight to haul around. (I just checked my logbook and found notes about this, but not what the trajectory impacts were, sadly.)

2 Review of the ET sep sequence:

This schematic from the Ascent Pocket Checklist shows the feedline disconnect valves (annotation mine). Four total, two on either side of the separation plane. 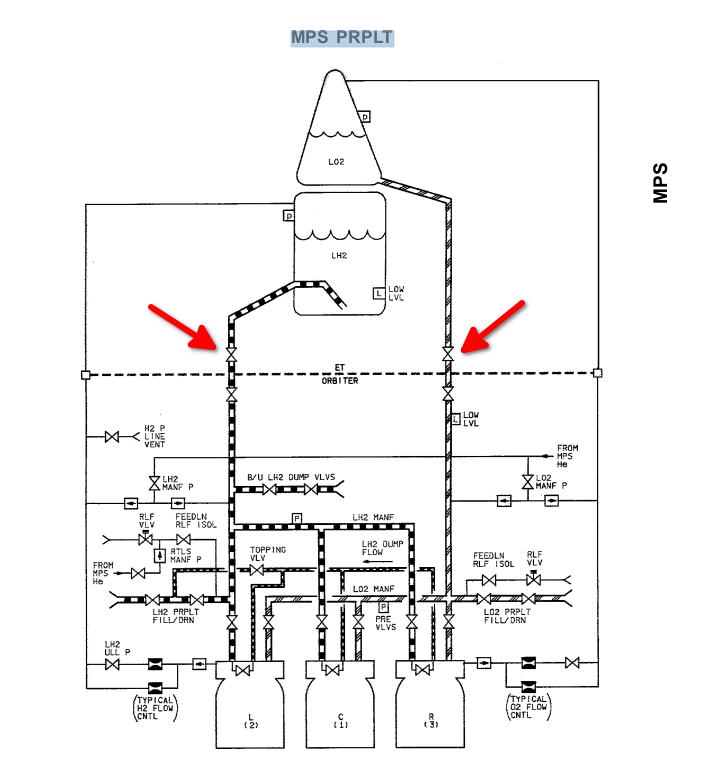 Not the answer you're looking for? Browse other questions tagged space-shuttle failure emergency procedure stage-separation or ask your own question.

21
How was fuel crossfeed achieved, between the main tank and the Shuttle?
17
What would the Δv cost of bringing the space shuttle external tank to orbit be?
1
What if both SRBs failed in a shuttle launch?

14
Is it possible for the Space Shuttle Solid Rocket Boosters (SRB) to hit the Space Shuttle after jettison?
19
What would have happened if only one Space Shuttle SRB ignited?
3
Could the SRB's have separated successfully at 70 seconds into flight
14
Was a method available to save the Challenger Crew?
4
Could Dick Scobee have flown a RTLS on Challenger 51L
4
Why would a space shuttle have flown a normal first-stage and early-second-stage ascent trajectory during an RTLS abort?
11
Why didn’t the space shuttle’s engine-out checklists include steps for attempting a relight?
2
Space Shuttle RTLS in 3-engine-out: what does it use for propulsion?
19
Challenger hypothetical - what if the SRB breach faced outboard?