Are there any images of SOOS?

SOOS--Stacked Oscar On Scout--was what it was called when the 1985 decision was made to replenish the Operational (Oscar) Transit constellation with unflown first-production models. Early Oscars were flown one at a time on Scout rockets, but by the time that they decided to replenish the constellation, Scouts could now carry two stacked atop one another: SOOS. 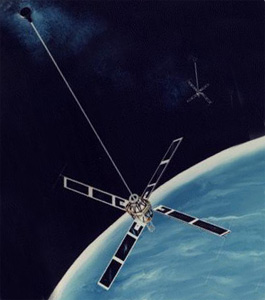 Are there any images of this payload?

The first part of this quote actually refers to the image in the question, which is also from the linked document.

Figure 7 shows the stacked configuration on the booster fourth stage with the solar panels removed from the upper spacecraft.

Not the answer you're looking for? Browse other questions tagged payload or ask your own question.

4
Is Transit 5B-5 a.k.a. Oscar 2 really "still kind of 'active'"?
6
What's the spiral pattern on this satellite?
5
What was the design failure that Johns Hopkins Applied Physics Laboratory is alluding to?

14
Are there any remaining spacecraft that can retrieve objects from Earth orbit?
9
Why are there such large differences in launcher payloads to higher orbits (GEO, Lunar) compared to LEO?
6
Since NASA's InSight Lander's launch has been delayed by two years, are there any plans to edit its payload?
9
What does it take to make a spacecraft able to launch on any out of several different launcher types?
18
Has any payload been as silly, as the Falcon Heavy's Tesla Roadster?
4
What secondary payloads, if any, are launching on the inaugural flight of Falcon Heavy?
11
Starman what are all these little bits
6
Where are all those blocks of steel and concrete now?