What are the challenges in recovering Falcon 9's second stage this way?

The Falcon 9's second stage is currently disposed of each flight. I know there have been some concepts by SpaceX on making it reusable, but evidently they have not yet done so. From my understanding, the difficulty in bringing this stage back comes from the much higher re-entry velocities and the higher payload penalty for adding weight (and saving extra fuel). That being said, I tried my hand at ideating a way in which this could be done: 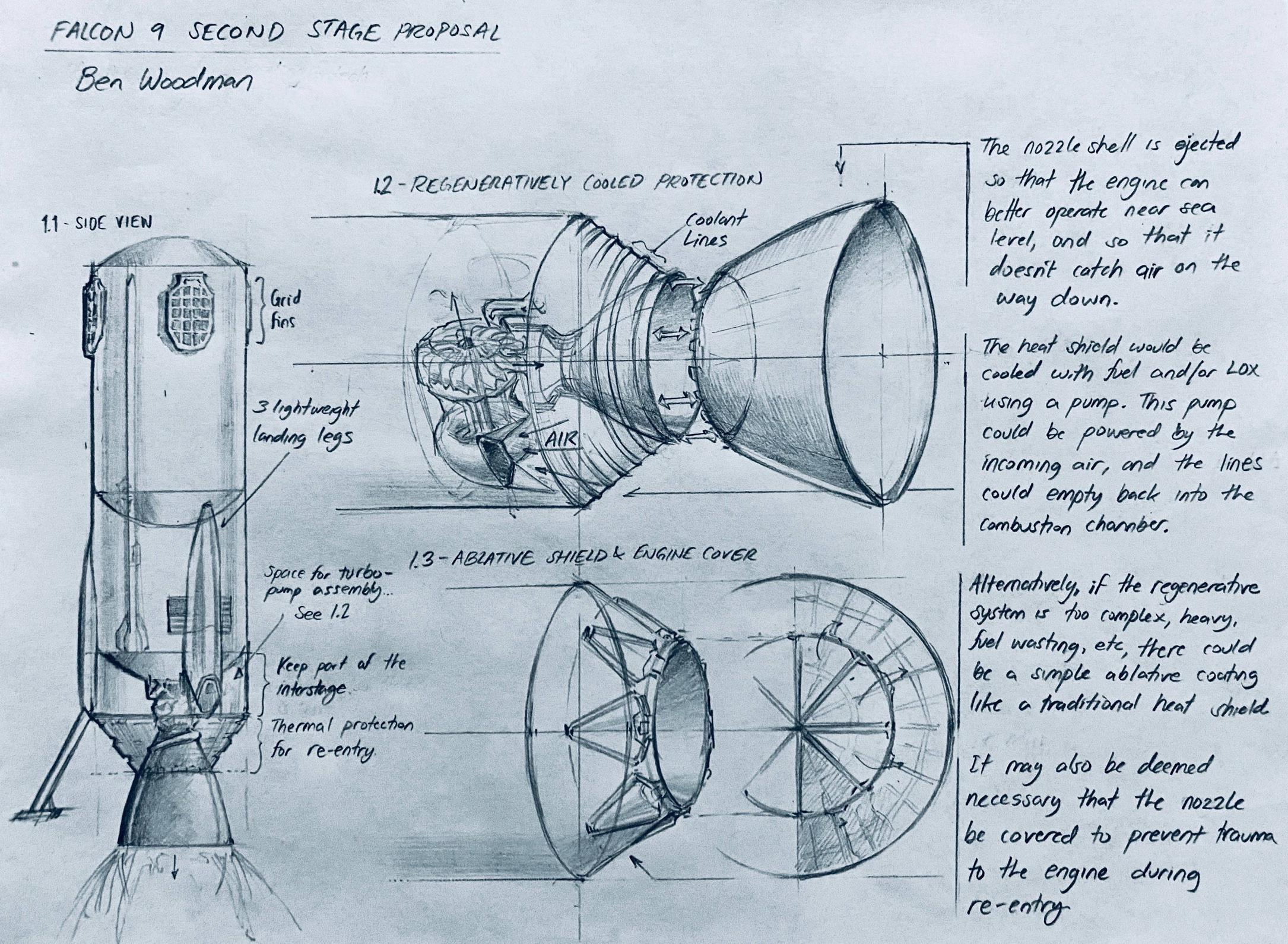 Basically, the stage would do its normal de-orbit burn and point engine first as it re-enters. It would be protected by either a regeneratively cooled piece or a traditional heat shield. It could then conduct a series of burns and land similarly to the first stage, with grid fins and landing legs.

I wanted to know a couple of things.

It's likely way too heavy.

Unlike the first stage, the second stage needs to accelerate all the way to LEO/GTO orbital speed. This means that all the extra stuff for reentry and landing needs to be first put into orbit and then deorbited again. All of the following thus cuts directly (gram for gram) into the payload capacity:

Payload to LEO is about 15 metric tons when not flying expendable. It's anyone's guess how heavy all the stuff above would be, but it's obvious it's going to be a significant fraction of the capacity. Reusing the second stage would only make sense when flying really light satellites to LEO. However, that problem can already be solved by ride-sharing or using a smaller launcher.

Finally, even if you managed to make this work for LEO launches, it'd be impossible to use for GTO payloads where the current capability is just over 5 metric tons (and GEO satellites in general tend to be on the heavy end). So you'd have to have two very different designs of the second stage depending on the destination orbit, which would likely make all kinds of processes more expensive.

My guess is that they are not interested in recovering Falcon 9 second stages, because they are mainly focused on Starship/Superheavy. There the second stage: Starship, has been designed for reentry landing and reuse from the start.

0
is a re-usable cygnus possible?

25
What makes the Merlin vacuum engine so deeply throttleable?
7
How long does the F9 first stage remain hypersonic under control of its grid fins?
9
Why doesn't the Falcon 9 booster use rigid air brakes during landing attempts?
19
SpaceX first stage landing: Why not use an elevated net above the landing platform to catch the rocket?
10
If it is difficult for Merlin engine to have deeper throttling, could it be as an option a different engine at the center of the rocket?
22
Why did the grid fin of the CRS-8/SES 10 booster burn?
2
What is producing these strange lights around the Falcon 9 grid fins (Starlink launch)?
17
Reusable spacecraft: why still have fairings detach, instead of open/close?