Would the Yarkovsky effect ever be faster than a solar sail from a 1 AU orbit to the Sun?

Previously I'd mistakenly asked Would the Poynting–Robertson effect ever be faster than a solar sail from a 1 AU orbit to the Sun? when I'd meant to ask about the Yarkovsky effect which can be much stronger in some situations.

I'll repeat the question here with the correct words: 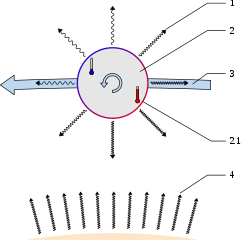 In this answer to Do you need 0 km/s velocity to crash into the sun? I mention solar sails for retrograde thrust and the Poynting–Robertson as two ways an object could ever-so-slowly spiral into the Sun.

But as pointed out in this excellent answer to Would the Poynting–Robertson effect ever be faster than a solar sail from a 1 AU orbit to the Sun? it would always be much slower than you could do with a solar sail.

But now let's consider a thin, rotating shell, using known materials with modest extrapolations (like they do for solar sails) and ignoring deterioration due to solar wind, radiation damage and meteorites, is there some mass regime where a configuration optimized for Yarkovsky effect would be faster than a configuration optimized for a vanilla solar sail to get from a 1 AU orbit to the Sun?

For example, if two teams were assigned the task of designing a passive Sun-spiraling craft and given the same mass constraint, would the SolarSailors team always win no matter what mass was chosen, or are there some masses where the Yarkovsky effect could win?

First, let me introduce the "perfect solar powered photonic thruster", which does the following two things:

A solar sail is almost a perfect photonic thruster. It can clearly do 2), since the reflected beam can be shone in any direction. Sadly, it can not do 1) perfectly, since to achive 2), it must be angled away from the Sun. The cross section area scales by $\cos(\theta)$.

Now, for the Yarkovsky spacecraft, let's consider a more ideal configuration than a constantly rotating surface. After all, such a spacecraft is spending a lot of time radiating heat into space at suboptimal angles. If we instead have total control of the orientation at any point in time, and still can't beat a solar sail, then it should be clear that the necessarily more inefficient Yarkovsky effect would be even worse off.

Condition: Such a perfect Yarkovsky spacecraft must have a collection surface facing the Sun head on.

Proof: Angling the surface reduces the cross section area, which would only make sense if the surface had to double up performing the only other thing a photonic thruster does, namely sending off photons. But radiating heat happens in a diffuse hemisphere, so an angled surface would be trivially less efficient than a solar sail angled in the same direction.

So by perfect absorption and half-efficiency emission, the spacecraft can be at most 75% efficient with respect to momentum.

At this point, our highly idealised Yarkovsky spacecraft absorbs one unit of momentum completely radial to the Sun, and can then gain half a unit of momentum in an arbitrary direction afterwards. By trigonometry, it can therefore not thrust more than 30 degrees away from zenith.

By comparison, a solar sail is very good at thrusting up to 30 degrees away from zenith. At that point, the cross section area is only reduced to $\cos(30°) \approx 0.866$. This is still higher than the theoretical efficiency of a Yarkowsky spacecraft. Perfect reflectors do not exist, but they are above 90% in practice, so solar sails still win.

This is of course assuming that mass/area for good reflecting and absorbing materials are not significantly different. Since we can manufacture reflectors right down to the thinness where all materials start turning transparent, then if anything, reflectors have a material science advantage.

As you appear to be more interested in how well this structurally scales, a solar sail experiences equal acceleration over the whole area, while a Yarkovsky spacecraft experiences differential radiation pressure, requiring some structural integrity of the construction material. Both will require support structures when attaching a payload.

Not the answer you're looking for? Browse other questions tagged orbital-mechanics physics design-alternative solar-sail or ask your own question.

23
Do you need 0 km/s velocity to crash into the sun?
13
Could radiated heat propel space-craft in outer space?
15
Why paint only one-half of Bennu?
11
Is it possible to reach the Sun without expending any fuel/reaction mass?
4
Maximum velocity achieved by solar sail
5
What is the functional form for r(t) for a solar-sail deorbit into the Sun?
6
Did Rosetta improve on models of non-gravitational effects on comet 67P's orbit?
3
What is the optimal angle for a solar-sail deorbit towards the Sun when radial thrust is included?
0
Would the Poynting–Robertson effect ever be faster than a solar sail from a 1 AU orbit to the Sun?

51
Can you tack against the sun using a solar sail?
6
What is the most stable configuration for a centrifugal ship towed by a solar sail?
7
Is a manned craft powered by Solar Sail feasible from Earth Orbit to Lunar Orbit
5
How would Solar Flares affect Solar Sail navigation?
3
Is it possible to launch a satellite into orbit with a solar sail and a weather balloon using the magnetic poles?
1
Can modified solar sail use Earth's atmosphere to correct an eccentric orbit?
5
What is the functional form for r(t) for a solar-sail deorbit into the Sun?
3
What is the optimal angle for a solar-sail deorbit towards the Sun when radial thrust is included?
0
Would the Poynting–Robertson effect ever be faster than a solar sail from a 1 AU orbit to the Sun?
5
Equation for Velocity and distance from Sun of a solar sail powered spacecraft